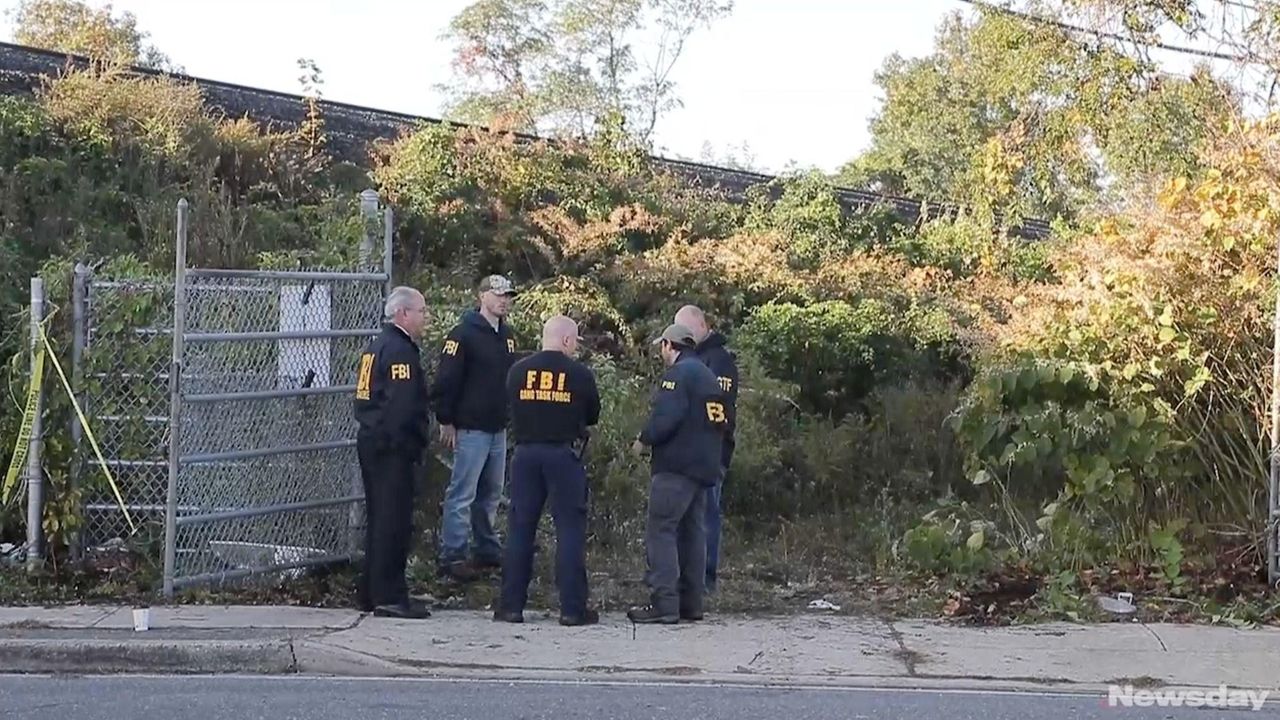 Authorities on Saturday confirmed the discovery of more human remains -- also believed to be those of a victim of gang violence -- this time in a wooded area on the Freeport-Merrick border. Nassau homicide detectives and FBI agents with the Long Island Gang Task Force spent hours scouring the scene for additional evidence -- an all-too familiar sight of late. Credit: Howard Schnapp

Authorities on Saturday confirmed the discovery of more human remains — also believed to be those of a victim of gang violence — this time in a wooded area on the Freeport/Merrick border.

Over a span of nine days, there have been three grisly discoveries, after a teenager’s body was found Oct. 19 in woods in the Roosevelt-Baldwin area and another set of remains was unearthed Wednesday in a Freeport park. The scenes are only a few miles apart.

In each case, authorities suspect the victims were killed by members of a brutal street gang.

“There’s no information to suggest this was a random act,” Michael Osborn, the FBI assistant special agent in charge, said of the remains found Friday afternoon. “We believe it was gang-related.”

A tip led to the latest discovery, authorities said. The remains were found in thick woods surrounding a large pond east of the Meadowbrook State Parkway and north of Long Island Rail Road tracks.

Nassau County acting Police Commissioner Patrick Ryder did not say if any of the killings were related, and authorities cautioned that the remains found Friday would take several days to identify.

Police declined to detail the condition of the remains or say how long they might have been in the woods. It was not known whether the remains were related to the others found recently.

“We’re collecting intelligence to make sure the people who commit these horrific murders, sometimes against innocent children, are brought to justice and held accountable,” she said.

Looking for additional evidence, FBI agents and Nassau police spent all day Saturday searching the private land where the remains were found and the surrounding area off Babylon Turnpike, aided by heavy machinery and off-road vehicles.

Authorities on Long Island have been cracking down on the notorious MS-13 gang, which targets for killing those who members believe have disrespected the gang or are members of rival gangs.

Nassau authorities have conducted sweeps since Thursday, arresting 58 people throughout the county on suspicion of criminal activity, including six immigration holds, but they are not related to any recent homicides, police said.

Twelve gang members were among those arrested — six members of MS-13, three Vatos Locos, one Salvadorans With Pride, one Latin King and one Crips member.

Another search for remains was conducted Wednesday by Nassau officers at the Massapequa Preserve, a 432-acre park where in March, the body of Julio Cesar Gonzales-Espantzay, 19, was found.

According to police, Gonzales-Espantzay had been stabbed and shot in January and authorities have said two men whom they described as MS-13 members were responsible for his death. No other remains were found in the preserve, authorities said.

The remains of 16-year-old Angel Soler of Roosevelt were found Oct. 19 in a wooded area on the Roosevelt-Baldwin border. Federal and local investigators believe Soler was killed by MS-13 members, according to sources.

Police have not released the identity of the human remains found Wednesday in Cow Meadow Park and Preserve in an unincorporated part of Freeport.

The name of Angel Soler was incorrect in a previous version of this story.

FBI, police search for human remains in FreeportFor the second day this week, the FBI's Long Island Gang Task Force searched a ... LI crime statsSearch crime statistics in Nassau and Suffolk counties from 2006 to 2016. 5 ways to send story tips to Newsday Do you have information that might lead Newsday to an important story, or an investigation? A document that starts us on the trail? Here are five ways for you to send our journalists tips, documents and data with a range of security options.