Federal prosecutors on Wednesday, July 19, 2017, announced charges against 17 members and associates of the MS-13 gang for multiple crimes, including the April 11 slayings of four young men in Central Islip and the January killing of a man and wounding of a woman in a Central Islip deli. Acting U.S. Attorney Bridget M. Rohde made the announcement of a superseding indictment at a news conference at the federal courthouse in Central Islip, along with FBI Assistant Director-in-Charge William F. Sweeney Jr., Suffolk County Police Commissioner Timothy Sini and representatives of the FBI's Long Island Gang Task Force. Credit: News 12 Long Island) (Photo Credit: Family handouts, SCPD

Nine of the dozen or so MS-13 gang members who bludgeoned and hacked four young men to death in a Central Islip park — a brutal crime that brought national attention to Suffolk County’s battle with the gang — are now behind bars, federal officials said Wednesday.

Federal prosecutors also revealed the indictment of five other suspected members of MS-13 in connection with the January shooting inside a Central Islip deli that left a suspected gang rival dead and wounded an innocent woman, who was working as a clerk. Two of those suspects, who are brothers, were also indicted earlier this year in the killing of two teenage Brentwood girls, officials said, and ordered the deli hit.

The new allegations are contained in a superseding indictment, charging three men — Alexis Hernandez, 20, of Central Islip, Santos Leonel Ortiz-Flores, 19, of Central Islip, and Omar Antonio Villalta, 22, of Central Islip and Charlottesville, Virginia — each with one count of racketeering, one count of conspiracy to murder rival gang members, and four counts of murder in connection with the April 11 murders of Justin Llivicura, Michael Lopez, Jorge Tigre and Jefferson Villalobos in a Central Islip park.

Another unnamed adult suspect in those murders is still at-large, according to court papers. Six juvenile suspected gang members have also been charged in the brutal killings, but all federal criminal proceedings against juveniles are sealed, so their identities were not released. Authorities would not discuss the status of the other suspects, but said their investigation continues.

Acting U.S. Attorney Bridget M. Rohde, speaking at the news conference, said MS-13 had suspected that several of the young men were members of a rival gang and wanted to kill them, so they had two female associates lure the four young men, and a fifth young man who was able to escape, to the park.

Suffolk Police Commissioner Timothy Sini said the arrests and indictments represent “another huge blow to MS-13,” a gang which the commissioner has vowed to defeat.

The indictment against Hernandez, Santis Ortiz-Flores and Villalta is part of a larger superseding indictment accusing 17 MS-13 members of a series of murders and other crimes, stretching back beyond the killing the two Brentwood High School high students in September 2016 — Kayla Cuevas, 16 and Nisa Mickens, 15. The three suspects in the April quadruple murders in Central Islip were arrested Thursday and have pleaded not guilty, officials said.

In a bail letter, prosecutors said: “[The four victims] were surrounded by more than a dozen MS-13 members, including the defendants, and engulfed in a horrific frenzy of violence as they were brutally bludgeoned, sliced and stabbed to death.”

Officials would not say whether the two females are among the six juveniles charged in the killings.

The families of the four young men have denied they were gang members. Federal prosecutors declined to answer when asked Wednesday.

More than a half-dozen members of MS-13 were indicted earlier this year in the killings of Cuevas, Mickens and alleged MS-13 member Jose Pena-Hernandez, 18, whose skeletal remains were found in a wooded area near the former Pilgrim Psychiatric Center in the days after the girls’ bodies were discovered. 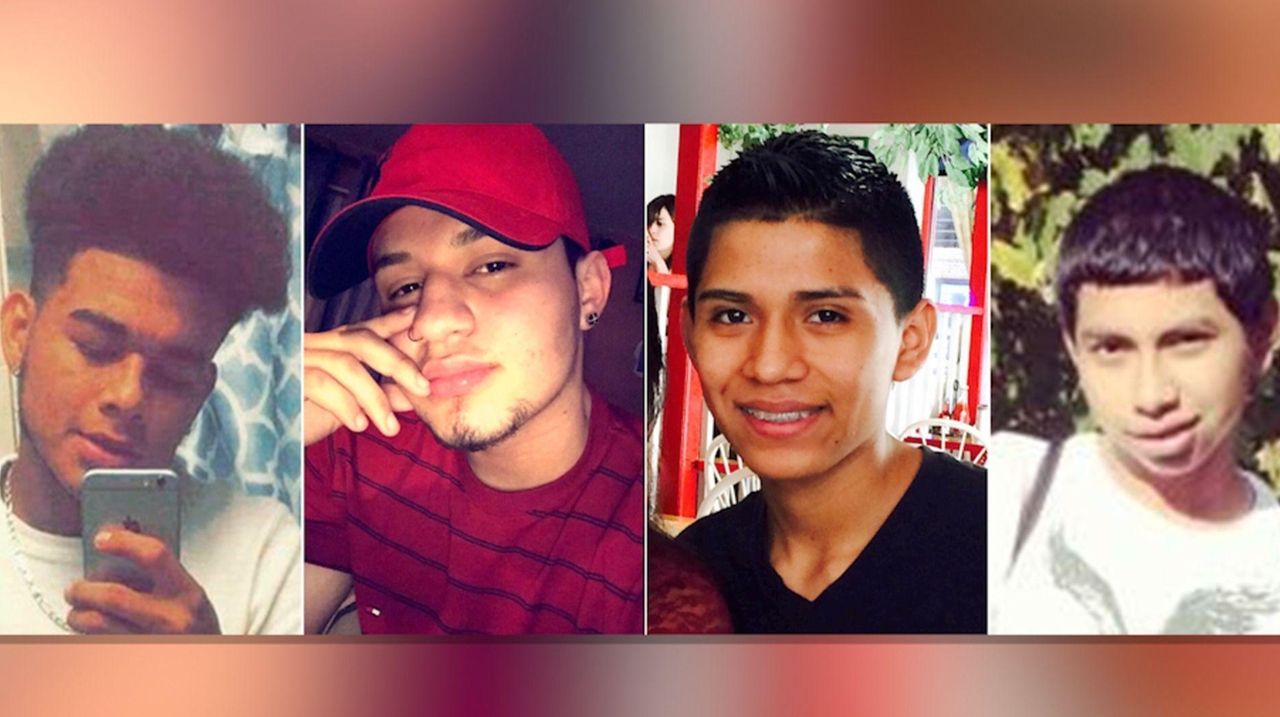 In the January deli shooting, the murder victim, Esteban Alvarado-Bonilla, was believed to be a member of a rival gang, prosecutors said.

The Saenz brothers have previously been indicted in the killing of Mickens and Cuevas, and according to Rohde, when Portillo, himself an MS-13 gang member, contacted his superiors “the Saenz brothers directed” Arguilar-Lopez, Suarez and other unnamed MS-13 associates to “go to the deli and murder Alvardo-Bonilla.” Portillo was also indicted in the girls’ killings.

Arguilar-Lopez, who was armed with a gun provided to him by the Saenz brothers, prosecutors said, “fired multiple shots into the victim from behind, killing him.”

One of the shots went through Alvarado-Bonilla’s head and struck the female clerk, who survived, prosecutors said.

How the shooting of NYPD officers unfolded
Wounded cop 'fighting for his life' after fellow NYPD officer shot dead
Official: One NYPD officer shot dead, one wounded in NYC
COVID cases continue to decline on LI — but what about risk?
Lubin Hunter, Shinnecock elder, activist, WWII veteran, dies at 104
Forecast: Below freezing temps for Saturday, Sunday
Didn’t find what you were looking for?