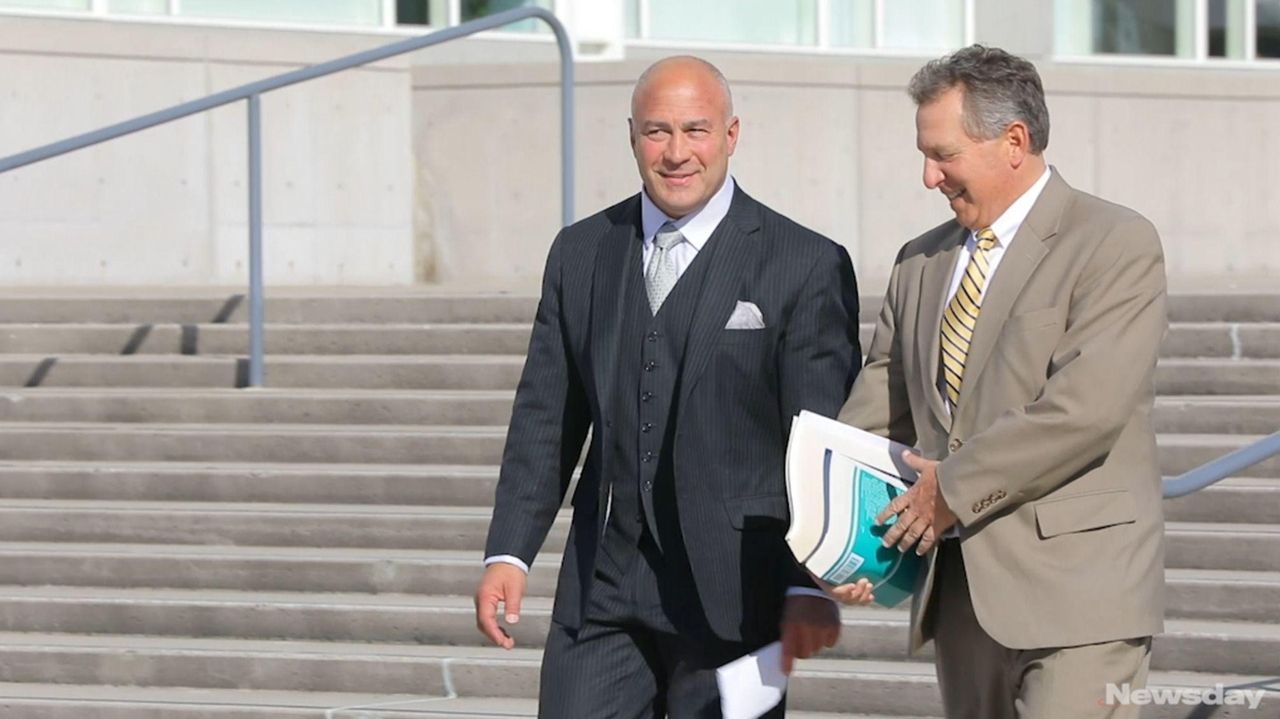 An attorney from Smithtown has been indicted on charges he stole more than $2 million in settlement funds from a minor and used the money to invest in a Patchogue nightclub and buy luxury cars, officials said on Friday, Oct. 27, 2017. A 19-count indictment charged Vincent J. Trimarco Jr., 48, with conspiracies to commit mail fraud and wire fraud and money laundering, among other counts, prosecutors said. Credit: Newsday / Jeffrey Basinger

A Smithtown attorney has been indicted on charges of stealing $2 million meant for a young girl whose father died in the Suffolk County jail in 2005 when she was an infant, officials said Friday.

The attorney, Vincent Trimarco Jr., 48, used the money to invest in a Patchogue nightclub and buy luxury cars, and properties, officials said.

The 19-count indictment charged Trimarco and the girl’s grandfather with taking part in the scheme, but the grandfather was only charged as a co-conspirator because he died in August, the indictment said. The money came from the settlement of a suit against Suffolk County over the jail death.

Trimarco was accused in the indictment with conspiracies to commit mail fraud and wire fraud and money laundering, among other crimes.

Trimarco, a former part owner of The Emporium nightclub in Patchogue, where some of the money was allegedly siphoned into, was arrested Friday morning by FBI agents.

In addition to his law practice, Trimarco has dabbled in local Republican politics. Despite the backing of the party establishment, he ran unsuccessfully in 2007 for the GOP nomination for the Suffolk County Legislature from Smithtown.

He pleaded not guilty to the charges before U.S. Magistrate Judge A. Kathleen Tomlinson at federal court in Central Islip.

Tomlinson released Trimarco on $500,000 bond secured by a property owned by his father, Vincent Trimarco Sr.

“As alleged, by defrauding a co-conspirator’s grandchild of an inheritance from a wrongful-death suit, the defendant violated the law as well as the trust placed in him as an attorney,” Acting United States Attorney Bridget Rohde said in a statement. “Protecting the public from those who, for personal gain, would abuse that trust and betray the laws they have sworn to uphold is a priority of this office.”

One of Trimarco’s attorneys, William Wexler of North Babylon, said after the arraignment: “When the facts are borne out, the government will find that my client has done no wrongdoing.”

John Ray, the attorney for the girl, who is now a teenager and lives in the Mastic-Shirely area, said Friday that he went to the FBI with the story eight months ago after he couldn’t collect the money from Trimarco.

“At long last justice has descended on Suffolk County,” Ray said. “For the little girl it could mean that her dreams could be fulfilled — [among them] to have a pony and go to college.”

Trimarco faces up to 20 years in prison if convicted.

While the federal indictment did not identify by name the person who died, the grandfather, nor the young girl, other court papers, newspaper articles, and the attorney for the girl, Ray, have done so.

According to those accounts, Suffolk County settled a suit for $3 million in 2011 after the girl’s father, Scott Eriksen, died in the Suffolk County jail following an arrest for fifth-degree possession of marijuana, a misdemeanor.

Eriksen’s family said he had been brutally beaten; jail officials said he became violent when being placed in a cell and only had received a minor cut on the head.

After $1 million in legal fees was deducted, some of which went to Trimarco, the girl’s grandfather, Gary Eriksen, received the remaining $2 million.

But in 2012, attorney Ray came forward to say that his client, the young girl who was living with her grandmother, was actually Scott Eriksen’s daughter and heir. The girl was born from a relationship between Scott Eriksen and her mother, then a neighborhood teenager, Ray said.

The Suffolk Surrogate’s Court agreed in 2012 that the young girl was the heir and entitled to the money.

But Trimarco did not return the properties purchased with the money from the settlement of Scott Eriksen’s death, according to the indictment. Instead, Trimarco worked out a scheme to sell them and pocket the money, the indictment said.

The scheme involved setting up shell companies he secretly controlled to purchase the property or material and then transfer the money to accounts he also controlled, the indictment said.