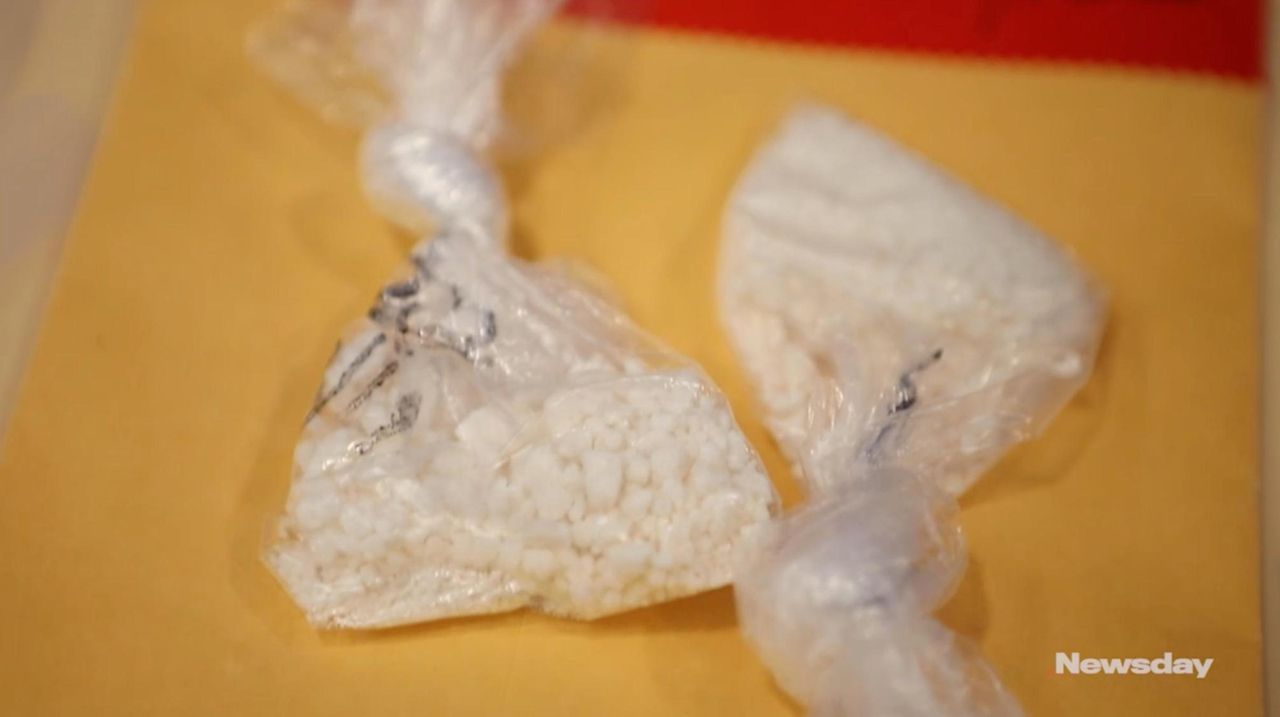 Authorities seized 400 grams of fentanyl — the largest seizure of the deadly synthetic opioid in Nassau County history — in two investigations that led to the indictment of 11 people on gun and drug charges, officials said. Credit: Newsday / Shelby Knowles

Authorities seized 400 grams of fentanyl — the largest seizure of the deadly synthetic opioid in Nassau County history — during two investigations that led to indictments charging 11 people with drug and gun offenses, officials say.

The fentanyl, valued at $130,000, represents 150,000 potentially fatal overdoses, said Nassau District Attorney Madeline Singas, who announced the seizure Wednesday in Mineola along with other law enforcement officials. Two milligrams of fentanyl is enough for a fatal overdose for most adults, according to the Drug Enforcement Administration.

“When you talk about 150,000 people fatally overdosing on this fentanyl, that is like a weapon of mass destruction,” Nassau County Executive Laura Curran said.

Five hundred grams of cocaine valued at $50,000 and eight firearms were also seized during the probes, launched in April by Singas’ office, the FBI Long Island Gang Task Force and the ATF Long Island Firearms Task Force, to combat drug- and gun-related violence in Hempstead.

Fentanyl has played a central role in the opioid epidemic that his killed thousands of people on Long Island since 2010, officials said. “This drug is so potent that just a tiny quantity can kill,” Singas said.

The number of fatal opioid overdoses on Long Island has declined in recent years, but addiction expert Jeffrey Reynolds, president of the Family & Children’s Association, said those gains could have been reversed if the 400 grams seized by authorities had hit the streets.

“While there are always other dealers that will take the place of those who are arrested, this seizure likely prevented lots of deaths,” Reynolds said. “Maybe there will be a few less empty chairs around the Thanksgiving table this year.”

Sinas said the leader of the drug ring, Ricky Jackson, 41, of Hempstead, led the eight-person ring from a federal prison medical center in Massachusetts.

“Jackson allegedly ran his drug enterprise from inside the prison, communicating using a prison phone and other means,” Singas said.

He is serving the seventh year of a 22-year federal prison sentence, according to Singas, but he was moved to the Nassau County Correctional Center as a result of the drug investigation. He had been convicted of federal charges of conspiracy to manufacture, distribute and possess with intent to distribute heroin.

Two of the defendants remain at large, officials said, while nine others pleaded not guilty at arraignments held late last month and Monday. Attorneys for most of the nine defendants who have already been arraigned declined to comment or did not return phone calls requesting comment.

“I was given a voluminous amount of discovery [evidence] and now I’m going through it to see if it supports the charges brought by the district attorney,” said George Michel, a Mineola lawyer who represents defendant Darren Devane, 33, of Hempstead, who was indicted on 18 drug charges.

The drug and gun rings operated in and around 100 Terrace Ave. in Hempstead, officials said. Nassau police Commissioner Patrick Ryder said residents of the neighborhood have expressed their gratitude for the arrests.

“The people on Terrace Avenue actually sent us a letter signed by over 500 people that thanked us for coming into the community and helping,” Ryder said.