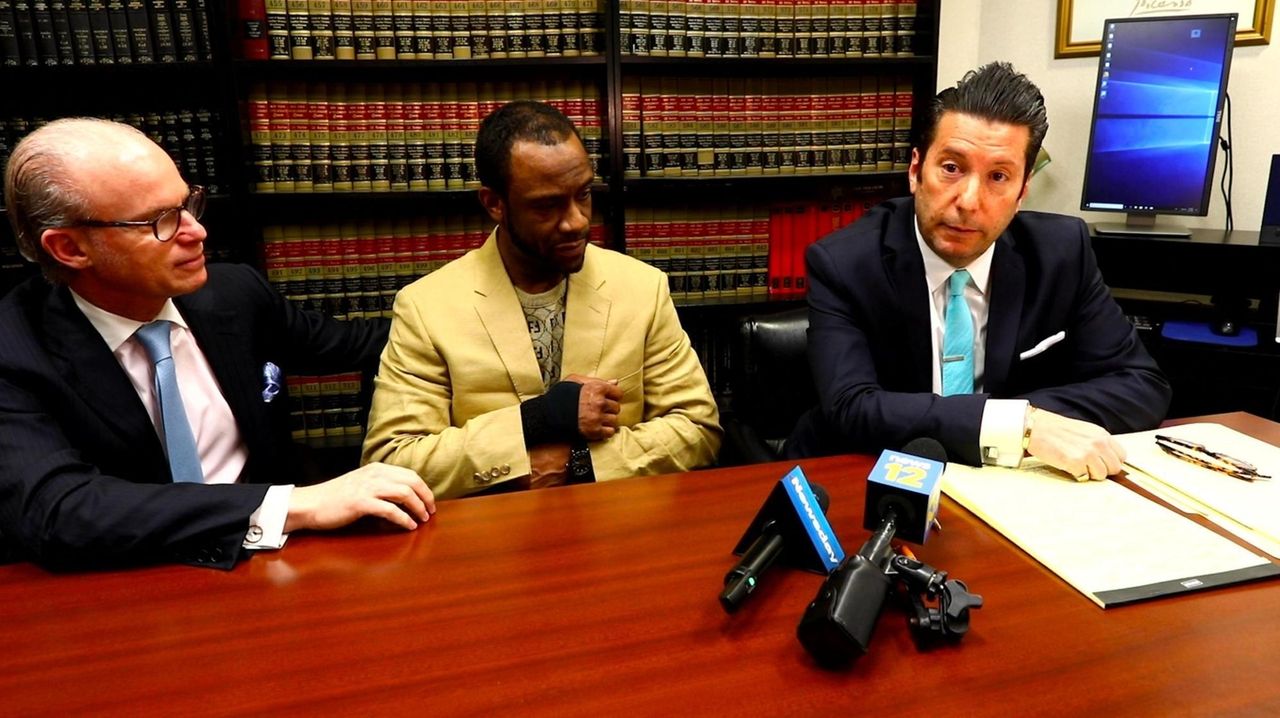 Attorneys for Akbar Rogers, the Freeport man whose Dec. 3 arrest was captured on cellphone video, have filed documents saying they intend to sue multiple public entities, including the Freeport Police Department and Nassau County, for $25 million.

Rogers’ attorneys held a news conference at their Garden City offices Thursday afternoon, where they replayed the video of Rogers’ arrest, which showed as many as eight officers involved. Officers pulled him over a backyard fence of a home on East Seaman Avenue in Freeport and subdued him with punches, kicks and Taser shots while he screamed for help, according to the video. The video of the arrest, taken by one of Rogers' neighbors, was widely shared on social media.

“We were able to capture on tape what happened to Akbar Rogers,” said attorney Greg-Patric Martello, adding that a “citizen journalist” shot the video. “The tape will show that he was brutalized in an outrageous fashion at the hands of the people who are supposed to protect us.”

Freeport Police said Rogers was resisting arrest and reaching for his waistband. A spokesman for the Nassau County district attorney's office later said no weapon was recovered. The DA's office was asked to investigate the matter.

Rogers, 45, was flanked by Martello, Stephen Wade LaMagna and Randy Zelin during the news conference at Martello & LaMagna, but he didn’t speak. He previously told Newsday, "I thought I was going to die."

Freeport Village and Nassau both said they do not comment on pending litigation.

From the video, as many as eight officers appeared to take part in the arrest, with at least two appearing to punch Rogers in the face, head and other parts of his body as he writhed on the ground under the bodies of several officers and yelled for help. Another officer appeared to kick him, and some could be heard using expletives and derogatory terms to describe Rogers as he lay on the ground in handcuffs.

An attorney representing the officers said Friday that they used "reasonable force."

“The evidence is overwhelming that the officers used the reasonable force necessary to arrest a man they had every reason to believe was a dangerous threat," said attorney William Petrillo, of Sapone & Petrillo in Garden City. "They knew he was wanted for assaulting a pregnant woman and leading police on a 100-mph car chase. They were aware of his violent and criminal past.

"All force used was appropriate, consistent with their training and stopped completely once the man was subdued. The notice of claim is entirely without merit.”

During the news conference Thursday, Martello said Rogers suffered injuries to his wrist, shoulder, spine and head. He faces resisting arrest and second-degree assault charges stemming from the arrest.

Rogers appeared in First District Court in Hempstead on Thursday on a second-degree harassment violation, the original charge for which police had sought him Dec. 3. He allegedly pushed a woman to the ground twice. That case was postponed to March 2.

Rogers had faced a traffic violation since November, when police said they first tried to arrest him. On Nov. 3, police said they spotted Rogers in a Mercedes-Benz and chased him, an incident in which they said he reached speeds of 100 mph, Freeport Village Attorney Howard Colton said. The chase was aborted for safety reasons, Colton said.

Zelin said he's asking prosecutors to drop all charges, adding that Rogers did not plan to plead guilty to any charges.

“It’s not a crime. It’s a violation,” Zelin said. “It was certainly nothing that couldn’t be handled with the issuance of an appearance ticket. We have a video. The video is everything anyone needs to see. It is memorialized on video from the start to the end.”

The assault charge was waived to a grand jury.

“We hope the district attorney will dismiss this case, but if they don’t, we welcome the grand jury to hear this case,” Zelin said.