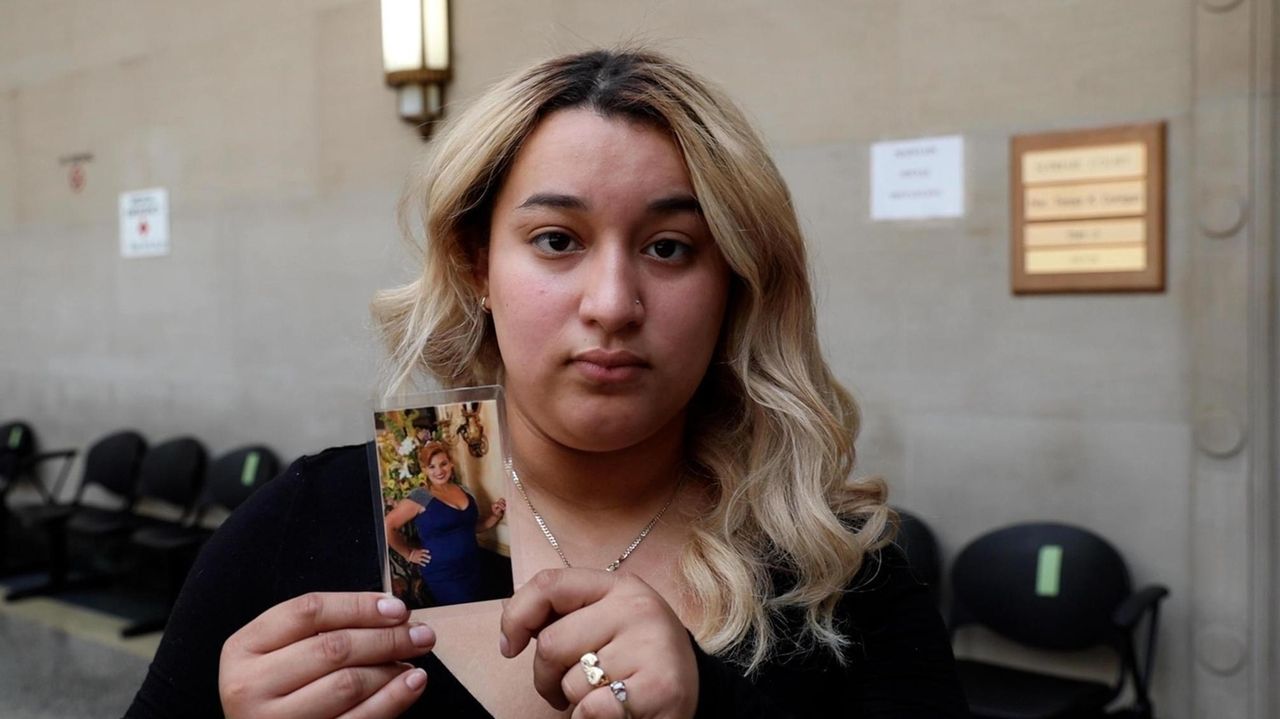 Emotions boiled over in a Mineola courtroom on Wednesday as Nicole Pollock, 28, pleaded guilty to causing a fatal crash and family members of Lissette Jimenez, 39, of South Hempstead, struggled to contain their grief and anger as they listened. Credit: Howard Schnapp; File Footage

A Freeport woman who drove drunk while mourning her grandmother's death tearfully admitted Wednesday to causing a Meadowbrook State Parkway crash that killed a mother of three and left the woman's 8-year-old son with a broken arm.

Emotions boiled over in a Mineola courtroom as Nicole Pollock, 28, pleaded guilty to charges including aggravated vehicular homicide, manslaughter and driving while impaired by alcohol and a drug in a deal that will send her to prison for 6 to 18 years.

The defendant wept as she acknowledged her responsibility for the Feb. 2, 2020, crash in a shaking voice.

Family members of the deceased, Lissette Jimenez, 39, of South Hempstead, struggled to contain their grief and anger as they listened. The victim's mother, Rosa Quintanilla, had her daughter's funeral Mass card with her and dabbed her face with a tissue as she faced the woman who ended Jimenez's life.

Later, Pollock's mother, Sylvia Young, slumped to the floor in sobs after court officers led her daughter out in handcuffs.

"Love you Nicole ... Lord have mercy," the woman called out before her collapse.

Jimenez was a certified nursing assistant who worked at NYU Langone Hospital – Long Island. She died the day before her second wedding anniversary — a day she had planned to spend getting license plates for the GMC Terrain her husband bought her as a celebratory gift.

Jimenez died less than an hour after the 12:02 a.m. crash on the parkway's northbound side near Exit M7 — a place her sister, Patricia Quintanilla, said she visited before going to court Wednesday.

"As time goes by it doesn't get any better because she's never going to come back," Quintanilla, 37, said later through tears.

No matter how much time Pollock spends behind bars, it won't provide closure, the Farmingdale woman added.

Jimenez’s youngest child, Brandon Guzman, now 10, needed screws implanted in his broken left elbow after surviving the wreck. His sister, Ashley Villatoro, 19, said Wednesday that Brandon has grown up a lot since then and has a black belt in Tae Kwon Do.

But Villatoro said her brother is "forever scarred," and doesn't like to talk about his loss as their family moves through the stages of what she called "complicated grief."

A 13-count indictment had charged Pollock with offenses that also had included assault, vehicular manslaughter and several charges related to driving while intoxicated.

She agreed Wednesday that she was driving under the influence of THC, the major psychoactive biochemical found in marijuana, and with a 0.18% blood-alcohol content — more than double the 0.08% legal threshold for intoxication — when she caused the wreck.

Pollock was driving a 2012 Nissan Rogue at about 100 mph when it hit the back of Jimenez’s 2006 Kia, according to authorities. State Police said the Kia crossed three lanes before going up on the road shoulder and hitting a tree.

A prosecutor said at Pollock's initial court arraignment that witnesses shouted to police that she was trying to walk away as authorities were trying to help Brandon. Police then ran after Pollock and she fought with a sergeant and slipped out of a handcuff before she was "taken to the ground" and arrested, according to authorities.

Pollock's attorney, Dennis Lemke, said Wednesday that his client, a college graduate with no prior criminal history, is "devastated" by the crash that happened hours after her family buried her grandmother.

The Mineola lawyer added that Pollock hopes those who hear about her fateful decision to drive that night will think twice about getting behind the wheel while intoxicated.

"If she can prevent somebody else from dying as a result ... then she's accomplishing something ... It's a very tragic situation," Lemke said.