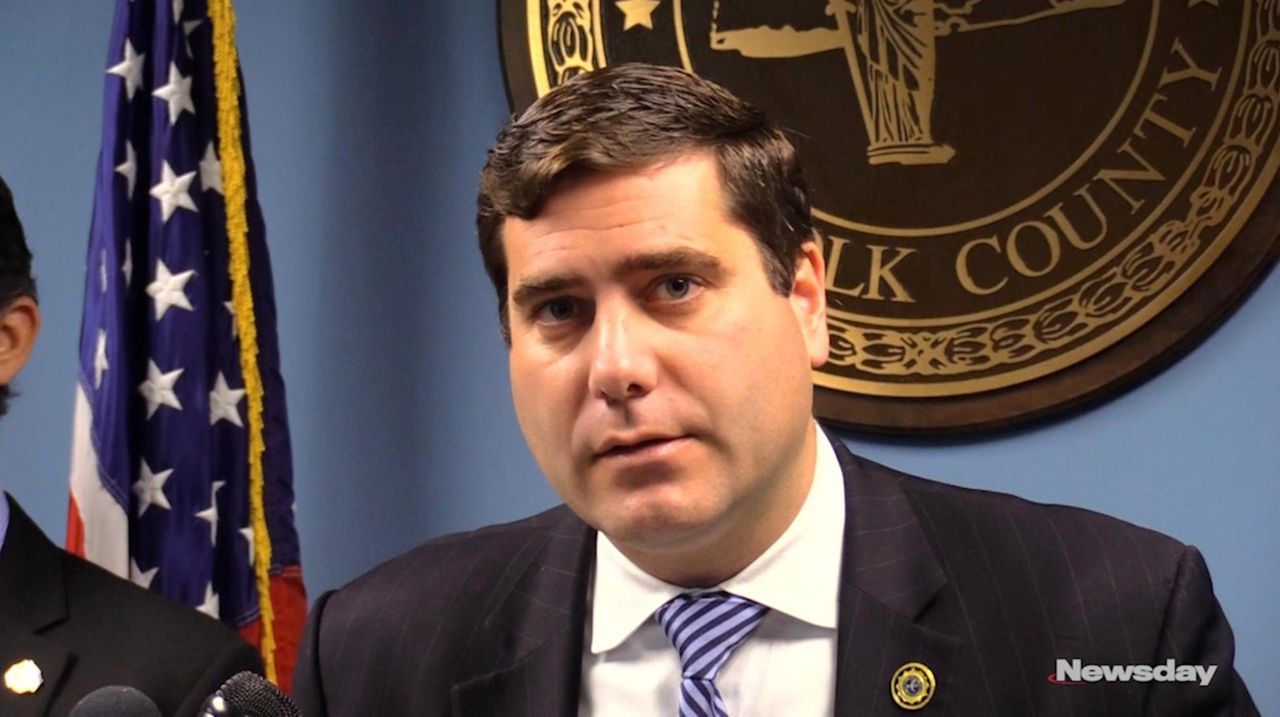 Three alleged 18th Street gang members have been indicted on charges they conspired to kill a pair of rivals from MS-13, authorities in Suffolk said Tuesday.  Credit: James Carbone

Three alleged 18th Street gang members have been indicted on charges they conspired to kill a pair of MS-13 gang rivals with machetes, authorities in Suffolk said Tuesday.

The alleged murder plot, which authorities said was discussed through text message and on social media in March and April, was thwarted by investigators when the suspects were arrested by federal agents with Homeland Security Investigations last month.

The three defendants — identified by authorities as Wilber Campos Chicas, 25, of Port Jefferson Station, Guillermo Linares Alvarez, 19, of Huntington Station and Isidro Canelas, 26, of Centereach — were charged in an indictment with second-degree conspiracy, a B felony. If convicted, they face 8 1/3 to 25 years in prison.

Chicas, Alvarez and Canelas, were arraigned on the indictment Monday and remanded, Sini said. All three defendants are in the country illegally, Sini said.

Defense attorneys for the three men could not be reached Tuesday.

Their motive, Sini said, was simply to engage in gang warfare.

The defendants deemed the victims "chavalas" or rival gang members and plotted the killing, Sini said, to assert the 18th Street gang's "power and control."

Between March 15 and April 24, the three defendants "took several steps in furtherance of their plan to murder their rivals," Sini said, sending text messages and communicating through social media to "share detailed descriptions of the victims' appearance and their whereabouts." They also shared a photo from social media of one of the victims, Sini said.

They discussed getting a car to be used in the alleged murder plot, Sini said, and also talked about the way they planned to commit the killings: using two machetes that Alvarez had.

Sini would not explain how law enforcement first became aware of the alleged plot, saying he wouldn't discuss investigative tactics.

"These were not empty threats," Sini said. "The rivalry between the 18th Street Gang and MS-13 is very real. In the past, we've seen these gangs kill each other to assert their dominance."

Gerald Handley, the assistant special agent in charge for HSI in New York, said his agency has a strong partnership with Suffolk County law enforcement, evidenced by these arrests.

"HSI and Suffolk County will not stand for violence at the hand of any gang member, whether the intended victim is innocent or a known member of a gang, we pay the same attention to the details and remain as proactive as possible to stay in front of the violence," he said.

Sini, in a recent interview, explained how his office works with HSI to prevent and prosecute gang violence.

"Sometimes we may have a case that's ramping up, and we fear that there could be violence and we're not ready to indict yet or we don't have sufficient evidence to indict, but they're here illegally," said Sini. "We have such a great relationship with HSI now that HSI will pre-emptively pick them up on immigration charges for being here illegally, and then it gives us more time to bring the criminal case. And they're off the street now and the threat of violence is no longer.”

1:54
'Let's vaccinate them at the schools': NY's vaccine push focusing on students
State figures: NY nursing home staff lagging in COVID-19 vaccinations
0:50
Farmers market grows on Oyster Bay vendors, residents
Huntington board moves forward with development of senior housing at Indian Hills
1:19
Patchogue dedicates plaque in memory of Marcelo Lucero
Precinct supervisor: 'We thought we had lost' injured cop after suspect stabbed him
Didn’t find what you were looking for?