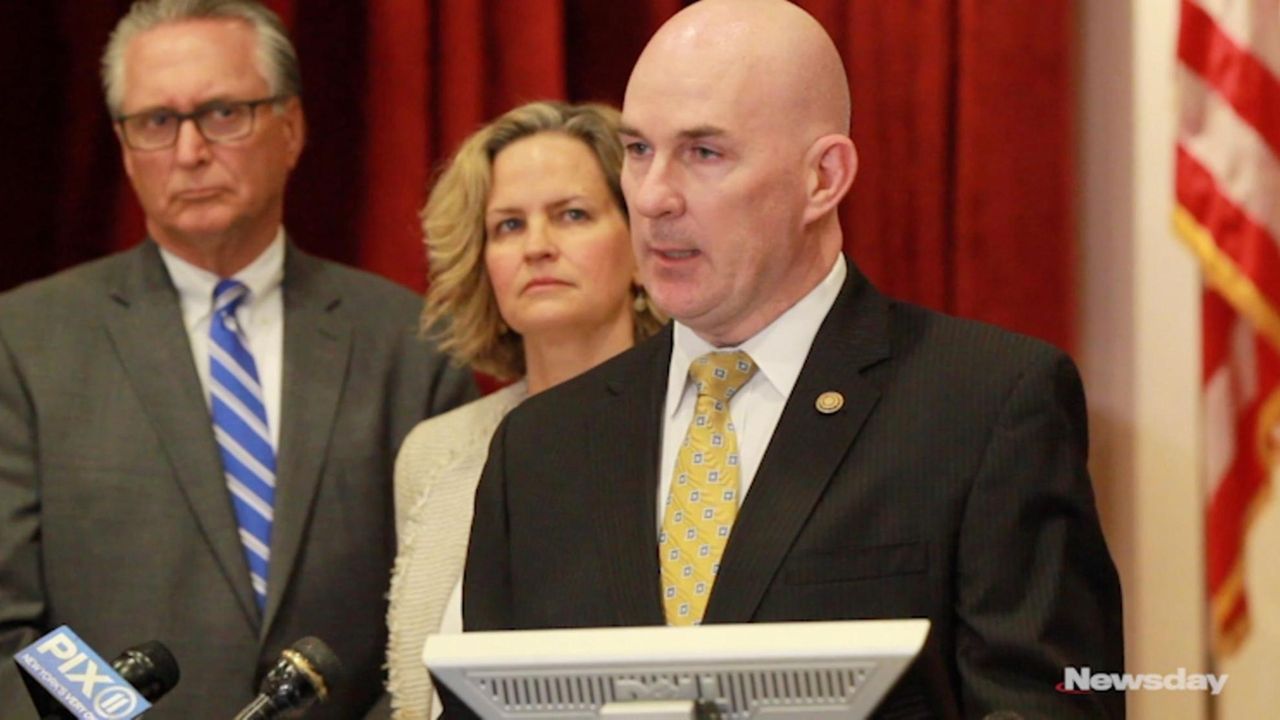 On Tuesday, Det. Lt. Stephen Fitzpatrick, of the Nassau County police homicide squad commander, spoke about the arraignment of a Baldwin man who was extradited Tuesday to Nassau from Philadelphia, where he had turned himself in regards to the hit-and-run death of a gas station manager in on Long Island in January.  Credit: Howard Schnapp

A Baldwin man charged in the fatal January hit-and-run of a gas station manager while trying to skip out on a $22 fill-up was ordered held by a Nassau County judge on a $500,000 bond Tuesday after his extradition from Philadelphia.

Joshua E. Roston, 33, who was indicted in February, pleaded not guilty Tuesday at his arraignment in Nassau County Court in Mineola to charges that include second-degree murder and first-degree robbery. Roston's court appearance came after his extradition from Philadelphia, where prosecutors said he fled after allegedly running over the manager of a Pit Stop gas station in Baldwin on Jan. 14.

Roston is accused of striking and killing Cemal Dagdeviren, 59, of Levittown, while fleeing the gas station, Nassau police have said.

Roston had turned himself into police in Pennsylvania four days after Dagdeviren was killed.

“It was only then that this defendant turned himself into police in Philadelphia,” said Zizza, who asked for Roston to be held without bail.

Zizza said Roston had twice in the past failed to appear in court and at the time of the gas station killing had five criminal cases pending in Nassau, including accusations of stealing gas from other service stations. Roston has a previous felony conviction for assaulting a Nassau police officer, Zizza said. He also has felony convictions in Pennsylvania and North Carolina, she said.

Prosecutors have “audio and video of the defendant’s statements that we intend to use at trial," she added without going into detail.

Police have said Roston pulled up to the gas station on Grand Avenue about 7:24 a.m. on Jan. 14 and asked an attendant to fill up his black GMC Suburban. Roston appeared to flash a $50 bill and the attendant pumped $22 worth of gas into Roston's SUV, police said at the time.

But the attendant noticed the SUV was missing inspection and registration stickers and had no license plates and asked Roston to pay inside the service station, where, police have said, Roston tried to use a fraudulent credit card.

Roston "allegedly accelerated the vehicle and ran over Dagdeviren, dragging his body for several feet, killing him," prosecutors said.

Joseph LoPiccolo, Roston‘s court-appointed defense attorney, said his client told police he acted in self-defense because he "feared for his safety" and didn't know Dagdeviren was injured when he drove away from the gas station.

"It was only when he was alleged to have been armed and dangerous that he turned himself in voluntarily to the police in Philadelphia for the purpose of clearing his name," LoPiccolo said of Roston. "He didn't believe it was murder under the circumstances. He didn't even know the person was injured or hurt, let alone died."

One of Dagdeviren's sons attended the arraignment, but declined to speak to reporters.