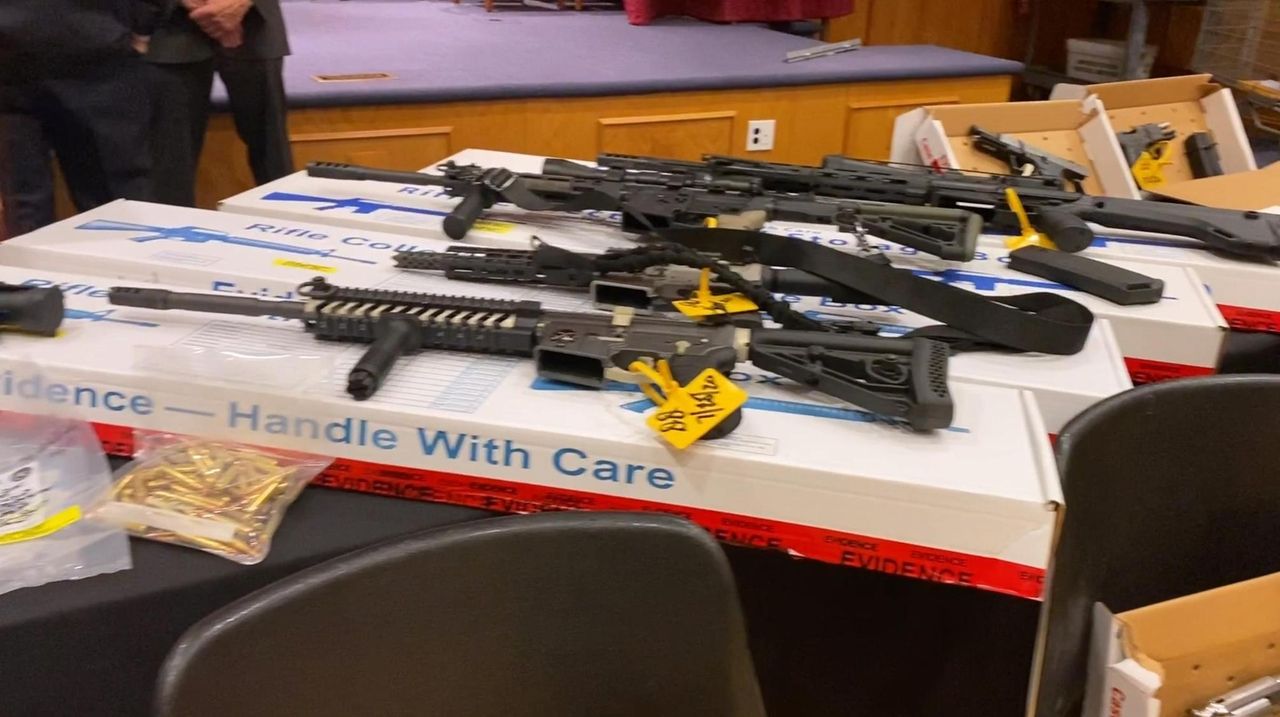 Police commissioner Patrick Ryder, who announced the arrests, said it began when police received a 911 call about 7:15 Wednesday morning reporting a man who was “out of control and threatening to shoot himself” outside of a home on Staples Street.

Ryder said responding officers calmed the man, identified as Daniel Petrizzo, 33, who was unarmed. Before he was taken to the hospital in an ambulance, Petrizzo gave police permission to search the home, which is owned by his father, Ryder said.

Inside, Ryder said police saw chemicals in liquid and powder forms, which he called “precursors to bomb-making materials,” and observed a book titled “The Preparatory Manual of Explosives Fourth Edition, Volume 1.”

The officers quickly left the residence and called for assistance from the police department’s Arson Bomb Squad. After obtaining a search warrant, investigators, now including the FBI, found a cache of weapons, including 11 unregistered handguns, seven unregistered assault rifles, four unregistered revolvers, two gun silencers, thousands of rounds of ammunition and 148 grams of a white powdery substance believed to be cocaine, and $2,000 in cash, Ryder said. Police also seized three vehicles at the home: a 2020 Audi, a 2016 Cadillac and a 2011 BMW sedan.

“The materials in that house that were recovered by our arson bomb guys is enough to make six well-sized bombs that could have been used against the public,” Ryder said.

In a criminal complaint, police alleged the trio operated a “makeshift clandestine explosive laboratory, which contained . . . [multiple chemicals]   with the capability of creating six or seven powerful explosive devices.”

But police couldn't immediately say if the suspects were planning an attack.

“We are not aware of that yet, what their plans were,” said Ryder. “We have to interview them. They all have now lawyered  up.”

Ryder said  of the bomb-making materials as well as the untraceable weapons: “This was stopped because of the good men and women of our police department.”

Petrizzo, wearing a face mask because of the coronavirus pandemic, disputed the allegations, as he was walked from a holding cell inside Nassau police headquarters in Mineola to a police vehicle that was to transport him to court.

When asked about the guns police said they found in the home, Petrizzo said: “no comment.”

His friends,Tiffany Pawson, 32, and Eddie Fernandez, 35, who police said are dating and also live at the Staples Street home, were also arrested and charged with multiple counts of weapons and drug charges.

All three pleaded not guilty at their arraignments. Their defense attorneys could not immediately be reached for comment.