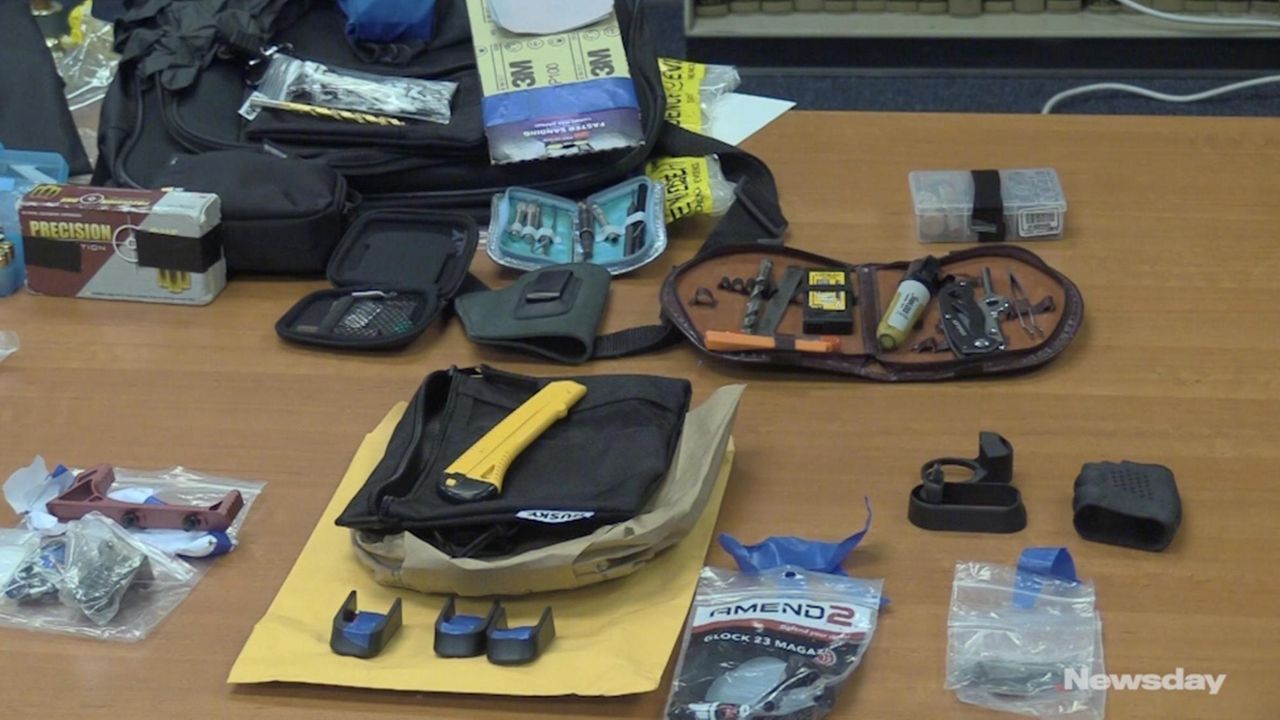 Christopher Swanson, 42, had an assault rifle, two loaded handguns, assorted gun parts, high-capacity magazines and other ammunition when Suffolk police arrested him on Aug. 14 at the Clarion Hilton on Veterans Highway in Ronkonkoma. One of the handguns was fully automatic, said Suffolk District Attorney Timothy Sini.

Police also found drug paraphernalia and more than 800 bags of heroin in the hotel room, Sini said after a 14-count indictment against Swanson was unsealed in Suffolk County Criminal Court in Riverhead.

Law-enforcement officials call firearms built from parts “ghost guns” because they do not have serial numbers and are untraceable.

“This is a drug dealer, a drug dealer who was assembling ghost guns,” Sini said after Swanson was arraigned Tuesday.  “It can’t be overstated how dangerous these weapons are. They are designed specifically to evade law enforcement.”

Sini said the weapons "are not registered with law enforcement and cannot be traced,” adding that they are "essentially made to be used in the commission of crimes.”

Swanson’s attorney, Charles Gleis of St. James, said his client was a gun “hobbyist” who did not know he may have been breaking the law. Suffolk Judge William Condon ordered Swanson held on $250,000 cash or $500,000 bond. He faces up to 15 years in prison if convicted of the most serious charge and is scheduled to return to court Oct. 8.

Sini praised sharp-eyed police officers from the Suffolk police department’s Fifth Precinct whom he said were responsible for the arrests. “This arrest and this prosecution is because of their outstanding police work,” Sini said.

Suffolk police Officer Daniel Teresky was on routine patrol late on Aug. 13 when he saw a vehicle in a handicap parking spot without a permit, Sini said. Teresky ran the license plates and learned that the vehicle had been reported stolen after it was not returned to the rental company by Swanson’s girlfriend, Marcella Brako, 39, of Sayville. Mail addressed to Swanson was found in the vehicle.

Hotel employees told Teresky and another Fifth Precinct officer, Gina Lauricella, that Swanson was renting a room at the hotel. Swanson, Brako and a friend, Leon Jantzer, 42, of St. James, were in the room when police came to the door.

Suffolk police Commissioner Geraldine Hart commended the efforts of the officers, saying their actions led to "the discovery of a cache of untraceable guns that are extremely dangerous and put everyone’s lives at risk."