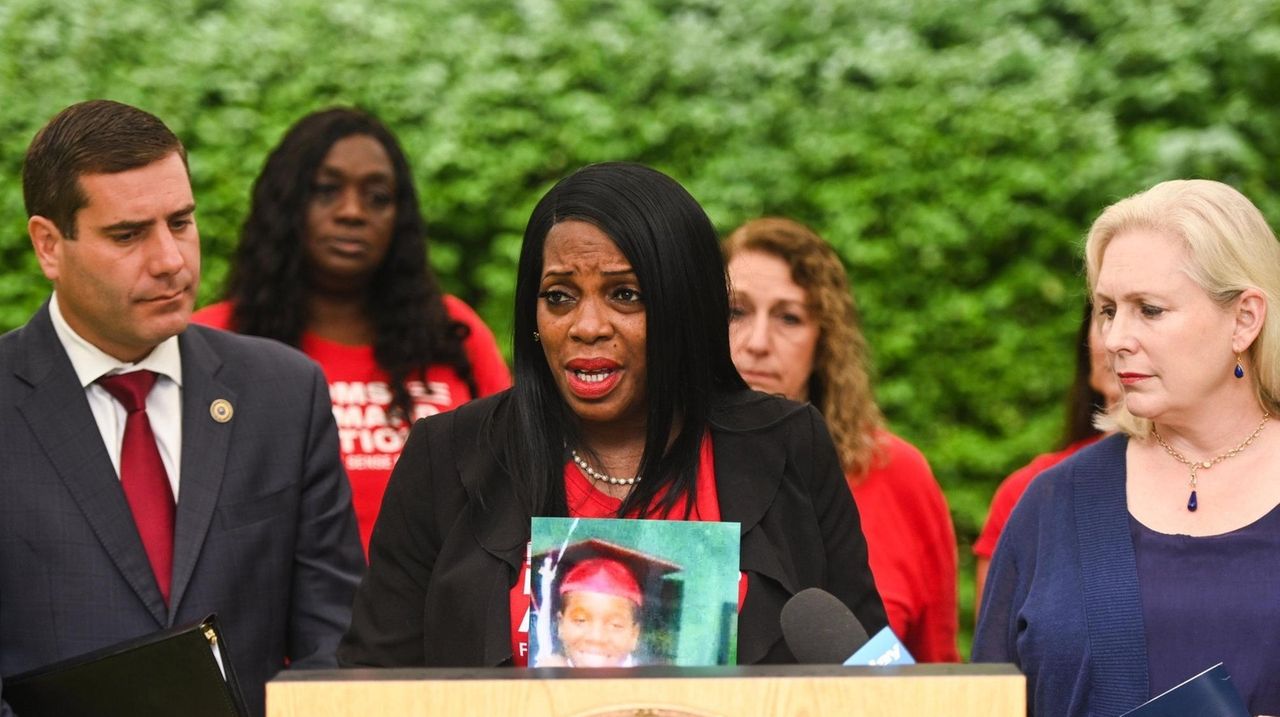 Sen. Kirsten Gillibrand (D-N.Y.) said she would reintroduce federal legislation to establish fines and penalties for those who ship, transport and transfer firearms to individuals not legally allowed to possess a gun.  Credit: Newsday / Steve Pfost

The bill would amend federal law making trafficking of firearms a federal crime and create fines and penalties for people who "knowingly ship, transport and transfer firearms to an individual not legally allowed to possess a gun," Gillibrand said alongside Sini and members of Moms Demand Action, which according to its website is a grassroots movement fighting to protect people from gun violence. The bill would also go after individuals who act as "organizers" for gun trafficking organizations, Gillibrand said.

"This is common sense, bipartisan legislation and I know we will pass this now," she said.

This iteration of gun trafficking legislation is not the first time the measure was introduced by Gillibrand. The bill was first proposed in 2013 after the mass shooting at the Sandy Hook Elementary School in Newtown, Connecticut, where 20 children and six adults died. Gillibrand has pushed the bill every legislative session since, but it has not cleared the Senate.

Asked how the bill can pass this time, Gillibrand spokesman Evan Lukaske said in a statement Friday evening, "Senator Gillibrand believes stopping gun trafficking should be bipartisan and she is committed reaching across the aisle to find common ground for this needed legislation."

The announcement Friday of reintroducing the bill comes after gun violence increased by nearly 24% in Suffolk County through the summer, in part because of gang activity, Suffolk County police department statistics show.

Acting Suffolk Police Commissioner Stuart Cameron has said the increase in shootings can also be blamed of the flow of illegal weapons in the county and fewer law enforcement gun seizures during the early days of the coronavirus pandemic.

While New York State has "some of the strongest gun laws in the country" Sini said, "unfortunately, not all of our neighbors along the Eastern Seaboard are as aggressive when it comes to gun safety."

Shenee Johnson of Moriches is a member of Moms Demand Action and is hopeful that the bill will pass. Her 17-year-old son Kedrick Ali Morrow Jr. was shot and killed in 2010 before graduating from Elmont Memorial High School. Kedrick would have celebrated his 29th birthday on Friday.

"I am determined as a mother to continue to stand and fight so there will be no other mothers like me," Johnson said.