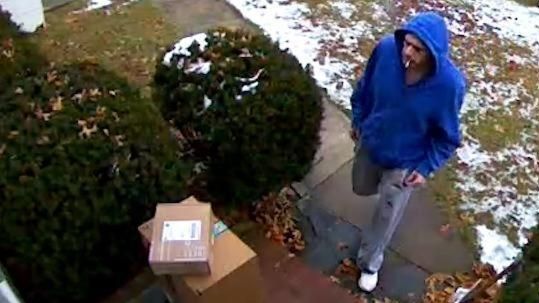 A package snatcher and his accomplice were arrested less than three hours after their un-Christmas-like deed — when video surveillance of the crime went viral, Southampton Town police said Tuesday.

The community identified the man who stole two packages about 11 a.m. Monday from a Hampton Bays porch and whose crime was uploaded to Facebook, police said.

The victim, Kevin Otto, said he was a little stunned by how fast it all went down, including 12,000 views of the video in less than 12 hours. An anonymous tipster even gave the then-current location of the silver sedan in the video, and detectives went out immediately, he said.

“It was pretty incredible,” said Otto, 33, an airline pilot. “The community was pretty loud about it. I don’t know if I expected him to be caught or not. . . . I literally got that camera last week. It was an impulse buy. And I guess it paid itself off.”

Otto said he was on his way home when the security system sent him an alert and the video. It shows a man in a blue hoodie with a cigarette in his mouth walking across the lawn to take two packages. He then hustles to a silver sedan parked in front of the home, the video shows.

“My sister is the one who posted it to Facebook,” Otto said. “It just exploded. Someone contacted her, and she relayed the info to me, which I relayed to the detectives. It was all the info, like where the guy was, what his name was and all that.”

Just before 2 p.m., officers pulled over a car in Bridgehampton that looked like the one in the video, police said, and inside was Pasquale Decicco, 37, and Christen Fleming, 34, both of Bridgehampton, as well as the victim’s packages and other parcels from thefts that had not been reported yet.

“They had actually changed their clothes to disguise their appearance,” police spokeswoman Lt. Susan Ralph said. “We wound up catching them. It’s great. The community worked together. . . . Everything came together, except for the Grinches, who did not steal Christmas.”

Decicco was arraigned Tuesday on three counts of petit larceny, which are misdemeanors, and two counts of fifth-degree criminal possession of stolen property, also misdemeanors. Bail was set at $700, according to Southampton Justice Court officials. He was represented by Legal Aid, which has a policy of not commenting in the early stages of a case.

Fleming was charged with one count of petit larceny and released on an appearance ticket.

Police said a patrol officer who located the getaway sedan in Bridgehampton followed it so expertly that the pair did not know a marked car was on their trail and that detectives were on their way, Ralph said.

Detectives stopped the pair’s vehicle on Main Street, Ralph said, and made the arrests.

What the man in the video would have done with his packages — Christmas cards and a gift for his 5-year-old daughter — Otto said he had no clue.

“We were pretty upset and angry at first,” he said. “It just upset me that it would happen on a quiet, little street.”

Otto thanked the quick action by all, from the community and the tipster to police and Amazon, which had promised early on to replace the packages.

But he added, “There was no way he was going to kill the holiday spirit in my house.”