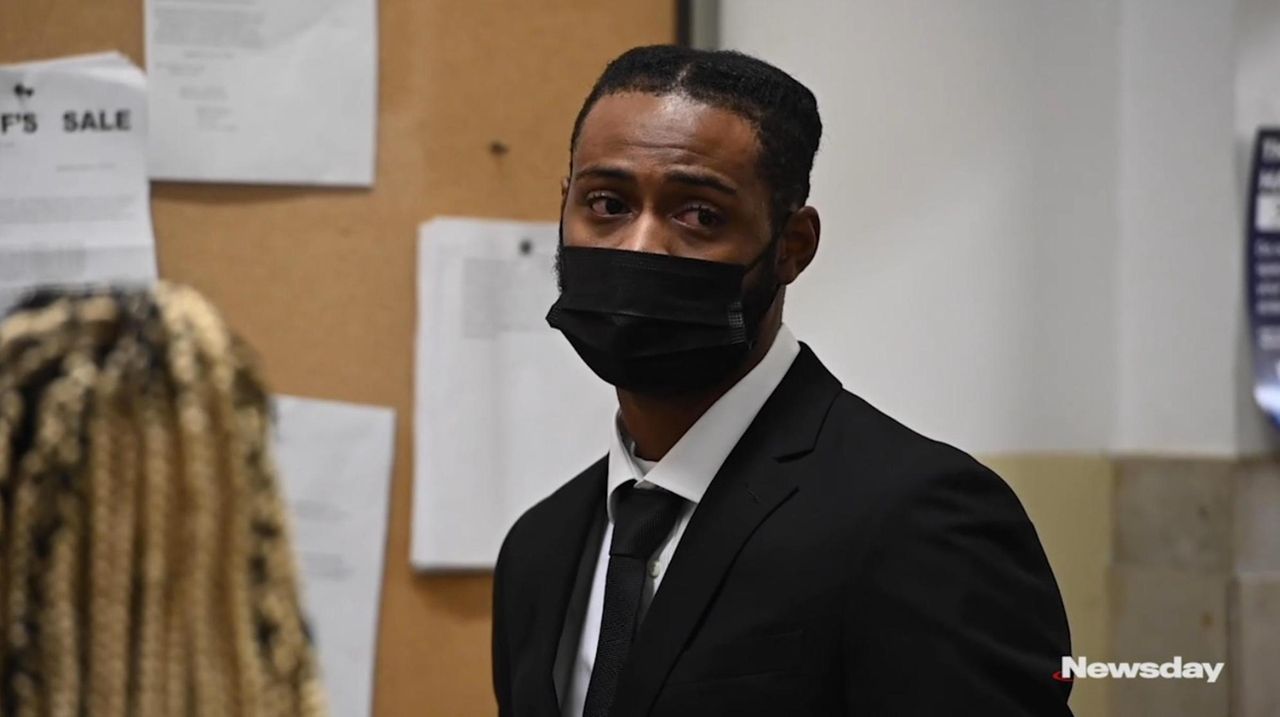 A former Nassau Community College basketball player pleaded guilty to manslaughter Friday after a deadly 2019 crash that prosecutors said he caused by chasing and ramming a car with his ex-girlfriend inside it.

Authorities said Dana King Jr., 24, of Valley Stream, couldn’t accept their breakup and tailed a BMW driver who picked up the woman at her home before a high-speed pursuit from Valley Steam to Hempstead ended in a fatal wreck.

Hayes’ passenger, Isabel Rodriguez, then 21, suffered a broken back and broken arm in the wreck just after midnight on March 19, 2019.

The crash also left Hayes’ two daughters, then an infant and a toddler, to grow up fatherless, his family has said previously.

Acting State Supreme Court Justice Francis Ricigliano said Friday he plans to sentence King under terms of a plea bargain to 4 to 12 years in prison for manslaughter and to 5 years behind bars for assault. The punishments will equate to a sentence of 5 to 12 years in prison since King will serve the penalties at the same time.

Prosecutor Katie Zizza said during Friday's hybrid court hearing, with some participants taking part virtually and others appearing in Nassau County Court, that the Hayes family and Rodriguez "agree to these sentences."

King had been due to graduate from Nassau Community College in May 2019, according to his attorney Michael DerGarabedian. The college’s basketball roster showed previously that King played for the team from 2016 to 2018.

The Rockville Centre defense lawyer said in an interview after Friday's court hearing that the former student athlete "made a terrible mistake."

He added: "The ability to take responsibility truly defines the person and he accepted responsibility on this and he's going to pay with his freedom."

King has been free on $500,000 bond while awaiting trial after an indictment on a manslaughter count and two felony assault charges. Before his plea deal, prosecutors said King had been facing up to 5 to 15 years in prison on the top count.

Nassau District Attorney Madeline Singas said in a statement Friday that "King's jealousy turned criminal" as he chased the other car, before causing the crash that "senselessly killed" Hayes and "seriously injured" Rodriguez.

Court records show the defendant reportedly gave police different stories about the lead-up to the wreck.

The documents say King initially told police Rodriguez was his girlfriend and he’d been waiting outside her home because the two and Hayes were planning to smoke marijuana together.

But later, King claimed he’d parked down the block from Rodriguez’s home before chasing Hayes’ car, the records show. They say he also told police he yelled "that’s my girl" at the BMW and Hayes hit the Audi with a wrench.

King then claimed he nudged the back of the BMW on the Southern State Parkway before a dispute on the shoulder in which Hayes threatened to kill him, according to the records.

Police said King also told them: "I messed up. I’m a good kid."

The defendant left court Friday without comment. But his father, Dana King Sr., became teary-eyed while speaking for him.

"A young man lost his life, you know?" the father said, calling his son too emotional to talk publicly. "... If he could stand in front of [you] all, he would definitely tell you .... how sorry he is for the family and everything."

The judge plans to sentence King in January.