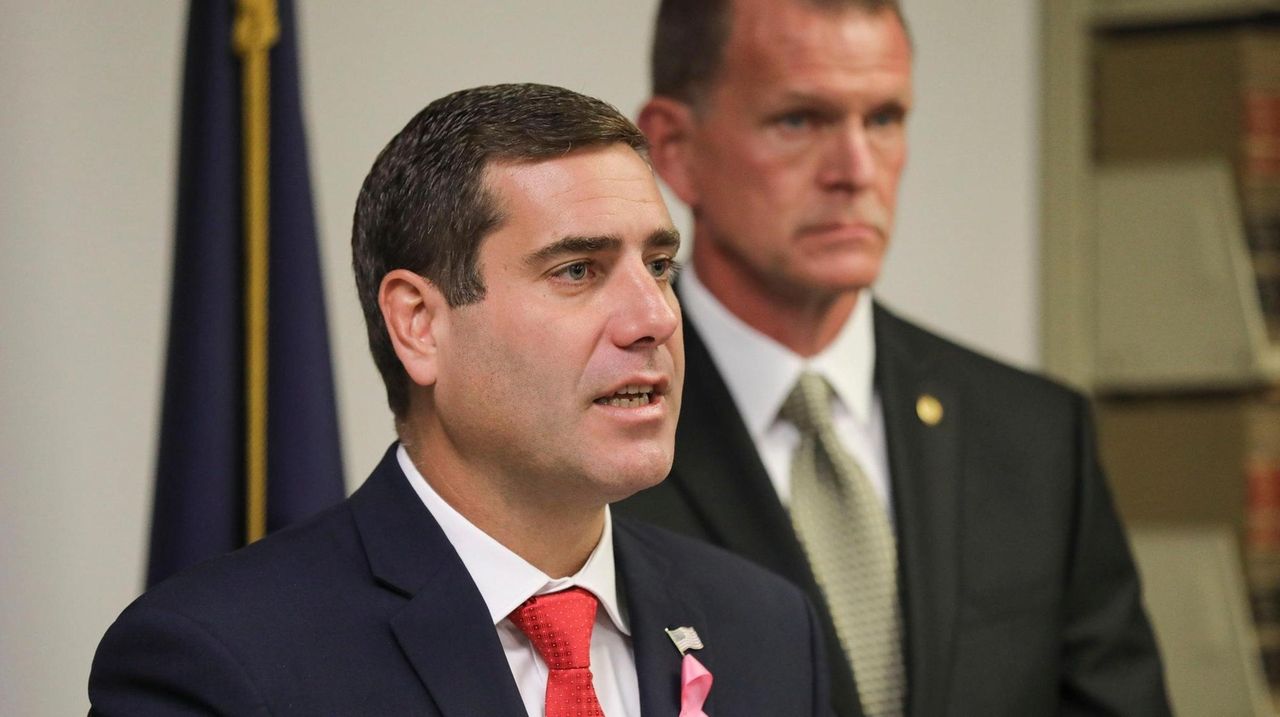 A19-year-old who prosecutors say lured three Hispanic day laborers into his vehicle in Farmingville with promises of work before attacking them because of their ethnicity pleaded not guilty Tuesday to a hate crimes indictment. Suffolk County District Attorney Timothy Sini discusses the case. Credit: Newsday / John Paraskevas

A 19-year-old who prosecutors say separately lured three Hispanic day laborers into his vehicle in Farmingville last month with promises of work before attacking them because of their ethnicity pleaded not guilty Tuesday to a hate crimes indictment.

The Suffolk District Attorney's Office said Cella is facing up to 15 years in prison if convicted of second-degree strangulation as a hate crime, the top charge against him. He also faces charges that include felony offenses of assault, unlawful imprisonment and reckless endangerment as hate crimes.

Prosecutor Sheetal Shetty told the judge Cella "gave a written confession detailing his crimes" in which he included that "he hated illegal Spanish people."

Shetty added: "He said that he wanted to do this to Spanish guys because they always would talk [expletive] about him when he worked with them because he was a white guy."

Cella's attorney, Richard Toscani, told the judge his client was a lifelong Suffolk resident who lives with his parents and is in outpatient treatment for mental health issues and substance abuse.

"There's some potential mental health issues at this point that my client is suffering from that need further investigation," added the Hauppauge defense lawyer, who declined to comment after court.

In the first episode, Cella allegedly picked up a 52-year-old day laborer from Holbrook near the La Placita deli in Farmingville on Sept. 17. After promising him employment, Cella then drove to an abandoned construction site, forcibly kissing the victim and putting him in a chokehold before he was able to escape, according to authorities.

They said Cella then went home, switched vehicles and picked up a 60-year-old day laborer from Medford at a 7-Eleven in Farmingville after offering him work. Then Cella took the man to an isolated side street near a condo complex in Medford, locked him in his vehicle and began to choke him into unconsciousness before a civilian intervened and Cella fled, authorities said.

In the third alleged attack, Cella returned to the 7-Eleven on Sept. 18 and picked up a 47-year-old day laborer from Brentwood, according to authorities. They said Cella took off speeding and the victim begged him to stop the vehicle before the man was able to grab the gear shift, put the vehicle in park and escape.

Cella then allegedly made a U-turn and drove directly at the victim before getting out and chasing the man on foot, a sequence prosecutors said was captured on video.

A civilian witness took a photo of Cella's license plate "and that ultimately led to an arrest," Shetty also said in court.

"The victims were merely looking for work but instead were abducted and attacked. And for what reason? By the defendant's own admission, because they were Hispanic," said Sini, who established a Hate Crimes Task Force in his office in March.

"Because of this defendant's actions, these victims and other day laborers may fear for their safety when they are simply trying to go to work in the morning," the district attorney said.

Suffolk acting Police Commissioner Stuart Cameron complimented the police work that led to the arrest of Cella, whom he dubbed "a very dangerous individual."

Cella, who also has a weapons case pending in Brooklyn, is due back in court on Nov. 5.