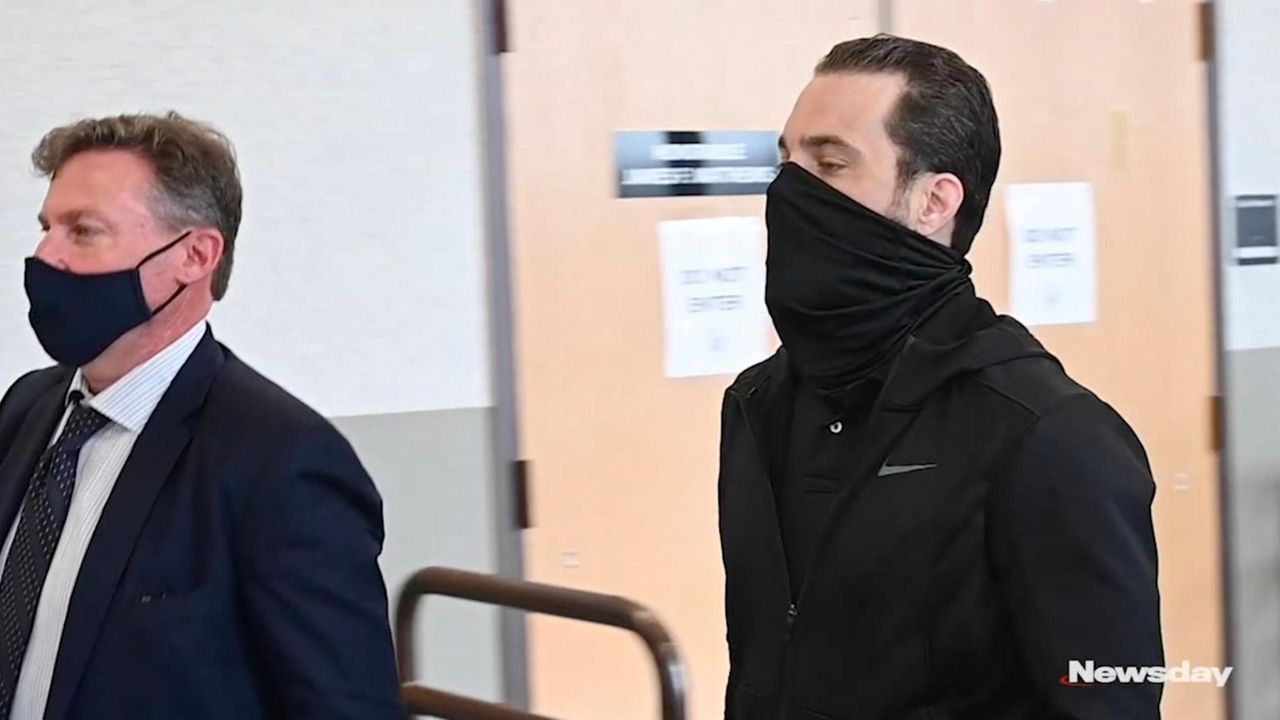 A Manorville man who prosecutors say was fueled by anti-Semitic hate and homophobia when he fired shots into a home and businesses and harassed his victims through social media has been indicted on multiple charges of gun possession and aggravated harassment as a hate crime, prosecutors announced Friday. Newsday's Steve Langford has more.  Credit: James Carbone

A Manorville man who prosecutors say was fueled by anti-Semitic hate and homophobia when he fired shots into a home and businesses and harassed his victims through social media with "extremely disturbing" messages has been indicted on multiple charges of gun possession and aggravated harassment as a hate crime, officials announced Friday.

Christopher Keller, 36, of Manorville, fired a .22-caliber shotgun into a Kings Park home and businesses in Nesconset, Holtsville and Medford, targeting the victims because of one’s Jewish faith and the perception that another was gay, between Nov. 22 and Dec. 1 last year, Suffolk County District Attorney Timothy Sini said.

"He harassed them," Sini said. "He shot a gun into establishments and residences throughout the county. He vandalized cars and posted extremely disturbing messages on Instagram targeting these victims and that’s why we took this case so seriously."

No one was injured in the shootings, Sini said. Keller also vandalized five cars between July and November, shooting them with pellet guns, prosecutors said.

Keller was arraigned Friday morning in Suffolk County Supreme Court in Riverhead on a 36-count indictment charging him with aggravated harassment, with a hate crimes enhancement, menacing, criminal mischief, reckless endangerment and criminal possession of a weapon for his alleged conduct toward a total of five victims. The hate crime charges relate to two victims. Sini said Keller faces a potential sentence of up to seven years in prison if convicted.

Keller's defense attorney Glenn Obedin said his client works as an engineer, has no prior criminal record and is a life-long Suffolk County resident.

Obedin said he was "not prepared" to go into the specifics of the allegations, including the alleged bias.

"I think that it’s dangerous of the prosection to assume that that’s the reason why these people were allegedly targeted quote-unquote, and I think if we allow the case to play out as it must, we’ll learn what, if anything, there is that's true, and not just rely on this type of sensationlism."

Sini called Keller "certainly a menace" who "has terrorized a number of individuals in our community based on his perception of their religion and sexual orientation."

One of the victimized businesses’ employees told detectives who were investigating the shootings and vandalism that he had been receiving threatening messages on Instagram that included anti-Semitic rhetoric and imagery depicting the Holocaust, prosecutors said.

Keller sent "extremely disturbing" messages to his victims on Instagram, including death threats and messages that were "sexual in nature," Sini said. Other messages allegedly included maps with the victims' addresses marked, photos of their family members, and "violently pornographic images," prosecutors said. Keller also allegedly harassed the victims via telephone.

Other messages, Sini said, "showed images of people of the Jewish faith" and "images that represented the Holocaust."

Sini said the connection between Keller and some of his victims is known and "quite bizarre," but in other instances it was "not entirely clear in all respects."

"When you’re targeted based on your religion, that is an extremely isolating and scary feeling to have," Sini said. "And this defendant is an absolute menace."

Keller was first arrested Feb.12 on a criminal complaint and released on a $300,000 cash bail set by Supreme Court Justice Richard Ambro, according to online court records. Police executed a search warrant at his home that day and seized an assault rifle, a .40 caliber semiautomatic pistol, a .22 caliber rifle, and multiple large capacity ammunition feeding devices, authorities said.

Sini said prosecutors on Friday asked Ambro to hold Keller in jail without bail, but the judge continued his bail and added GPS monitoring.