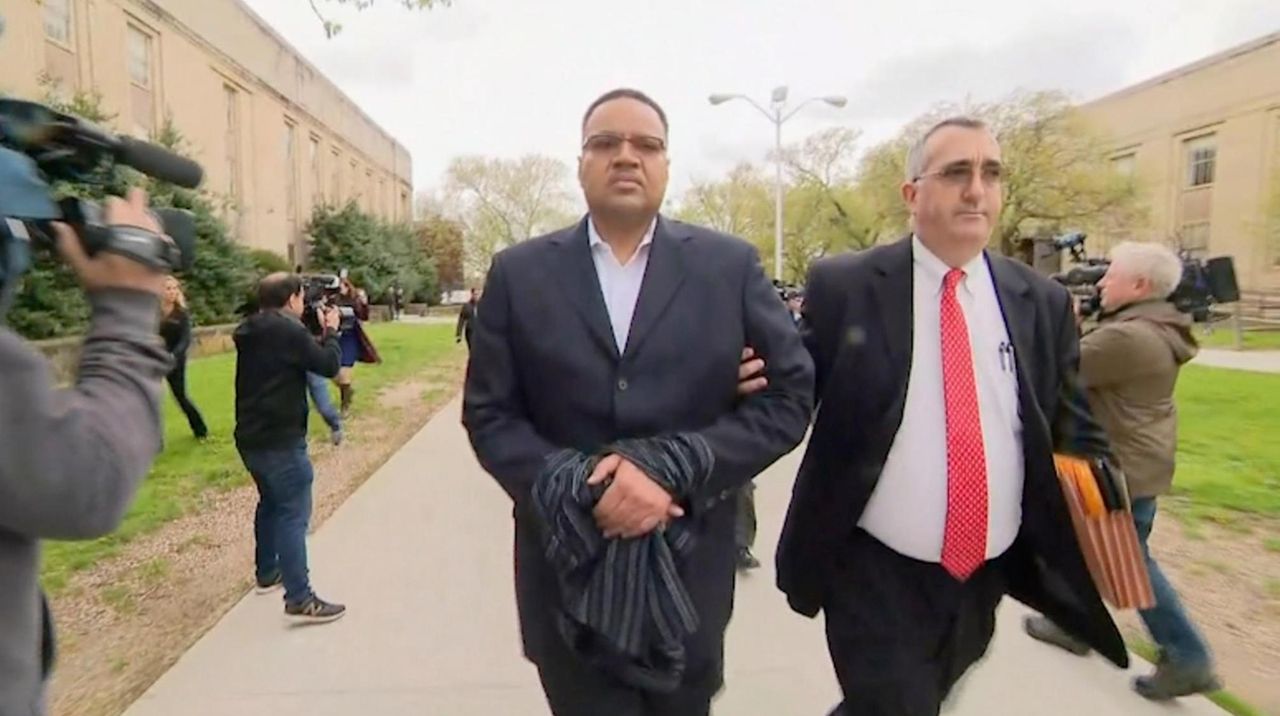 A detective led Hempstead Police Chief Paul Johnson into court Wednesday in handcuffs, where he denied allegations that he fixed tickets before his appointment as top cop and became part of a growing roster of officials from the same village ensnared recently in corruption charges.

Johnson pleaded not guilty to felony charges of tampering with public records and of grand larceny along with misdemeanor charges of official misconduct, records tampering, obstructing governmental administration, criminal contempt, conspiracy and a traffic offense.

Johnson, 54, of Baldwin, kept a stoic expression during the proceeding and didn’t respond to questions before leaving court with his wife.

The allegations say Pettus, who now faces six Nassau indictments, called Johnson on May 16, 2018, and told him about four tickets that Hempstead officers had given to a female motorist .

Earlier that day, Mendez had called Pettus about the tickets, which were issued to one of his employees, and Pettus told him he’d see what he could do about it, according to prosecutors.

Johnson, then a lieutenant who had applied for promotion, called Pettus back the same day and said the tickets would be taken care of, according to the allegations.

Prosecutors also claim Pettus was among those who interviewed Johnson on May 25, 2018, for the job of assistant police chief or deputy police chief, before Pettus called Johnson that evening and told him he’d be promoted.

The indictment says Johnson then told Pettus: "Ya' know, if I can look out for you cause it's something minor like a parking ticket, a traffic ticket, that's one thing. But if you're talking about criminal offenses and weapons and drugs and something, that's something different."

The district attorney’s office also alleged Johnson didn’t comply with an October subpoena ordering him to produce the tickets he allegedly fixed for Pettus and Mendez.

But Johnson’s attorney, Ronald Bekoff, on Wednesday defended what he called his client’s stellar record as a public safety official.

He said Johnson, a father of two, had served 24 years on the force and became chief last year after repeatedly scoring the highest on the test for that position. He said Johnson wouldn’t step down.

Bekoff added that it was “outrageous” to allege that his client became chief because he “had something tangentially to do with some traffic tickets that someone else issued.”

He said Johnson had cooperated with the district attorney’s investigation into Pettus.

District Attorney Madeline Singas said in a statement that the indictments stemmed from an investigation she launched because of community complaints about corruption and abuses of authority in Hempstead Village government and in the village police force.

"As crime in Nassau has reached record lows, violence has risen in Hempstead, and it is critical that leaders and the community collaborate to ensure that the public is served by an ethical government and protected by a professional and effective police force," Singas said.

Attorney James Druker, who represents Pettus, wouldn't comment specifically on the new allegations against his client. But he criticized prosecutors for bringing a fifth and sixth indictment against his client, who didn’t seek re-election to his trustee seat before the March election.

"This is now five times he's dragged in there for fingerprinting, processing, humiliation … I've never seen anything like this," Druker said.

Bruce Barket, an attorney for Mendez, downplayed the new accusations against his client, who also was indicted with Pettus last year in two other cases.

“Who hasn’t gotten a traffic ticket and if you know a cop well said, ‘Can you help me with this?’ ” he said.

Prosecutors also alleged Wednesday that in April of 2018 Pettus used his trustee role to ask Savino to fix tickets as a favor to Mendez.

Savino got rid of two parking tickets issued to Mendez and a traffic summons issued to one of Mendez's employees, according to the allegations.

Last July, prosecutors alleged Pettus pocketed more than $25,000 in bribes by extorting two local Hispanic restaurateurs with the help of Mendez, threatening to drive the victims out of business if they didn’t pay protection money.

Separately, Officer Robert Van Wyen pleaded not guilty in March after prosecutors alleged he stole an encrypted police radio and tried to sell it to a towing company.

That same month, Randy Stith, who sits on the village’s school board, pleaded guilty to possession of a forged instrument and  petty larceny and had to resign as  a police officer. He's also serving three years of probation.

Hempstead Mayor Don Ryan declined an interview through a spokesman, but in a statement called Wednesday’s developments “troubling.”

“We are taking the situation seriously and are fully cooperating with the Nassau County District Attorney’s office as they further explore this matter,” it added.

Assistant Police Chief Patrick Cooke will lead the department now, but village trustees haven’t decided whether Johnson will be allowed to keep working or collect his salary, according to the mayor.