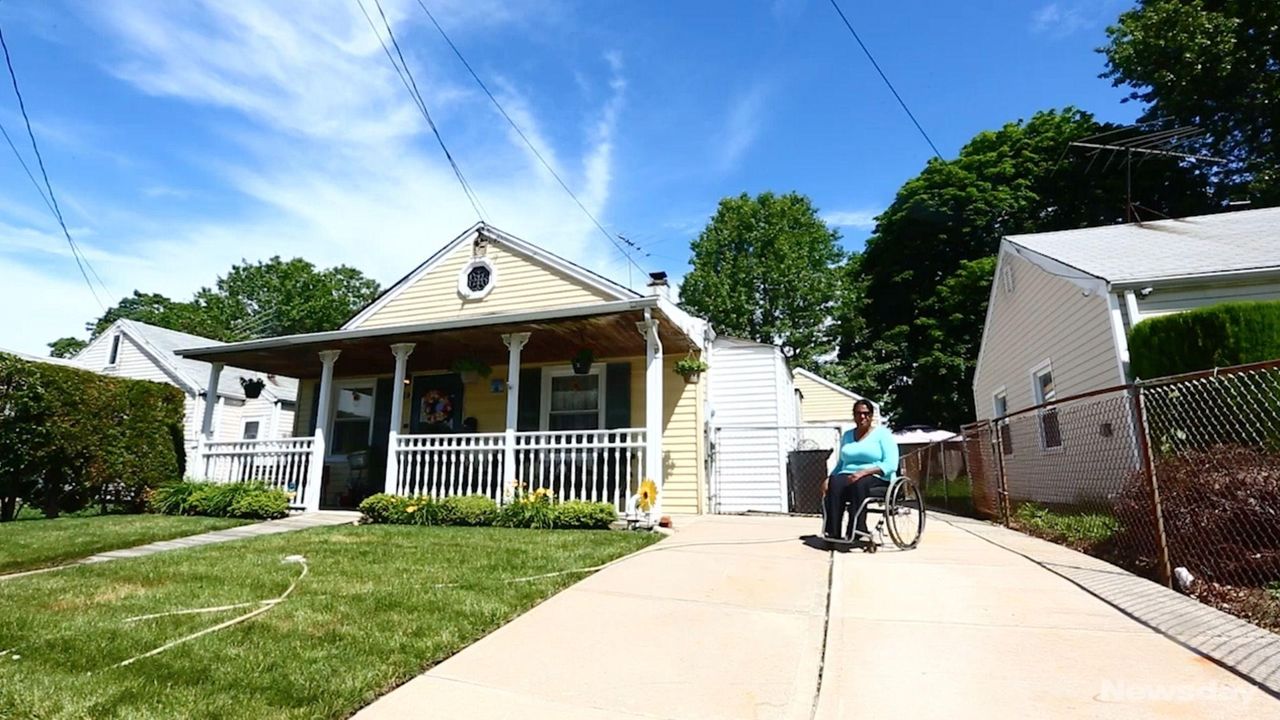 On the morning of May 21, Claire Helfenbein of Hempstead looked outside her house and noticed her handicapped-accessible van was gone. The van was designed specifically for Helfenbein, who uses a wheelchair, and her son, who has autism. On Thursday, June 8, 2017, Helfenbein spoke about the impact that the loss of her specially equipped van has had on her and her family. Credit: Newsday / Chris Ware

Nassau police are investigating the theft of a woman’s specially equipped minivan from the driveway of her Hempstead home last month, authorities said.

The woman, Claire Helfenbein, said Thursday she is unable to walk and has used a wheelchair her entire life. The minivan has a ramp and a special seat that allows her to get into it easily. Helfenbein said she received the minivan through several donations.

“It was like God opened up the sky and sent me this great gift,” Helfenbein said of the 2007 Chrysler Town & Country minivan. “It was a real community effort. I was very happy going about my life, taking care of my kids.”

Helfenbein said she used the minivan to take her son, diagnosed with autism as a toddler and in need of constant care, to school, physical therapy and other programs.

Someone stole the vehicle between 8 p.m. May 20 and 11 a.m. May 21 as it sat parked in the driveway of the Byrd Street home, according to a Nassau County police news release.

As she got ready for church on May 21, Helfenbein said, she noticed her van was missing.

“For a moment, I thought maybe it just rolled out of the driveway because I’m thinking, ‘who would steal this minivan? I lived here 17 years and nothing ever happened to my other minivan and no one on this block has ever had a car stolen,” she said.

The previous van she drove contained hand controls, Helfenbein said, but it was totaled after a collision last summer.

The missing van contains more equipment to assist her than the previous one, she said, and was purchased after an anonymous donation at her church, St. Thomas the Apostle in West Hempstead, as well as through other charitable assistance.

Helfenbein said she plans to pray in hopes the van will turn up.

“I’m just hoping with all this media that maybe they would just leave it somewhere where the cops can recover it and that I can get my van back.”

Detectives ask anyone with information to contact Nassau County Crime Stoppers at 800-244-8477. All calls will remain anonymous.