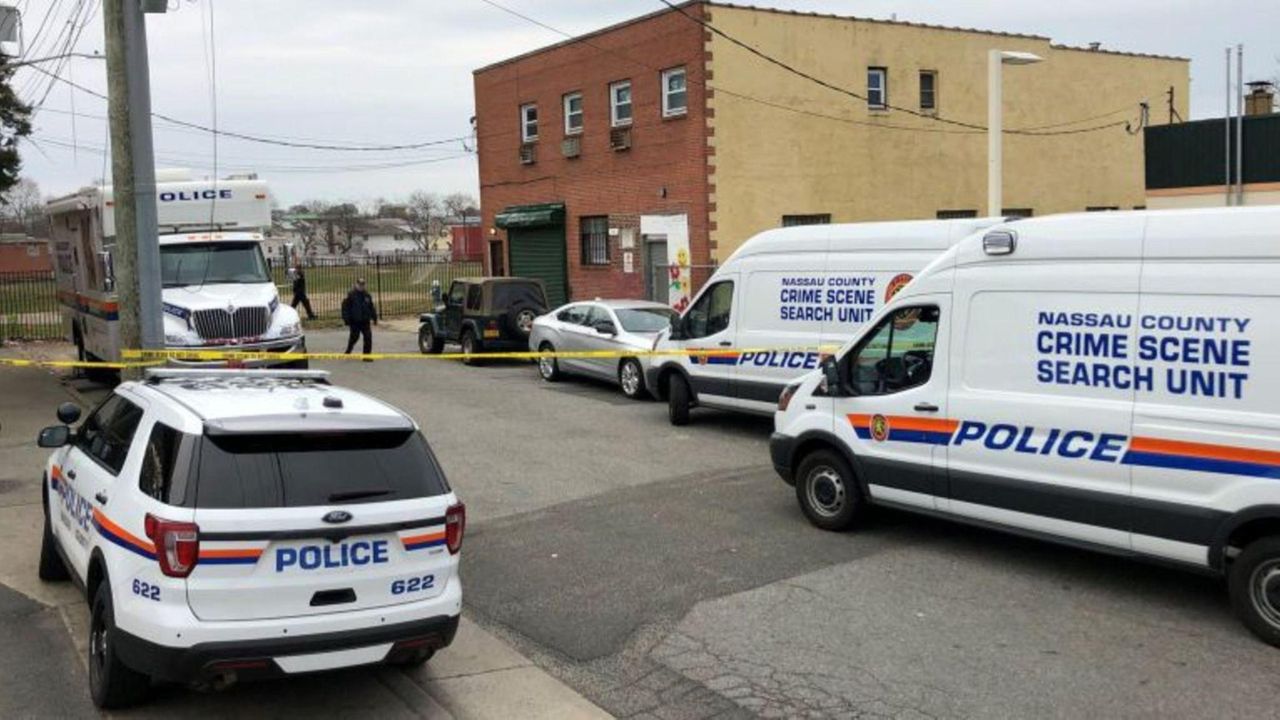 Police are investigating the stabbing death of an unidentified man found lying in a parking lot on Friday in Hempstead.  Credit: News 12 Long Island

An unidentified man was fatally stabbed late Thursday in Hempstead, just hours after authorities announced a new anti-crime program in the village.

The man was involved in an “altercation” shortly before midnight in Brierley Park, where he was stabbed in the upper torso, said Det. Lt. Stephen Fitzpatrick, commanding officer of the Nassau County Police Department’s homicide squad. The man walked to the parking lot of a nearby laundry on Clinton Street and collapsed.

The laundry's employees found him and called 911 at 12:07 a.m. Friday, police said. A Nassau County police ambulance took the victim to a hospital where he was pronounced dead at 1:07 a.m., police said.

On Thursday, County Executive Laura Curran, as well as county and village police, announced the results of an ongoing anti-crime initiative in the village that began after three daylight slayings there. The program has produced 100 arrests, including 12 for felonies, since it began two weeks ago, police said.

Fitzpatrick said he couldn’t comment on a possible link between the latest homicide and the new program.

“I don’t know who this man was or who would have a motive to hurt him or had an ax to grind with him,” he said. “So to say it’s anything related to that initiative, it’s too early to say that.”

Chris Giardino, president of the Hempstead force’s Police Benevolent Association, said the department is operating with at least 11 fewer officers — not including ones who are out on injury or administrative leave — than its budgeted allotment of 130. He said he believes the recent uptick in violence is indicative of the manpower shortage.

"It's frustrating," he said.

Giardino that said while he appreciates the additional officers and resources that are included in the anti-crime initiative, "It shouldn't have come to that."

Hempstead Mayor Don Ryan said in a statement that the department's ranks are "in keeping with our past manpower practices."

“As was discussed at [the initiative announcement's] press conference, there is no one specific reason for the recent uptick in crime," Ryan said. "In fact, overall crime in the village for the past five years is down. We are working closely with the Nassau County Police to address the current situation and [are] confident it will be successful.”

The village's violent crime is down 23.3 percent from 2013 to 2017, according to the most recent figures provided by New York State.

Police Commissioner Patrick Ryder told News 12 Long Island that Thursday's homicide does not appear to be gang-related but remains under investigation.

Fitzpatrick said he didn't believe the slaying is connected to the village's other recent killings.

“I don’t believe it’s related to anything else that’s happened recently in Hempstead," he said. "I think this is an isolated incident.”

Police have gathered video footage and evidence in Thursday’s homicide, though the lieutenant would not say if the weapon had been recovered.

The man is believed to be in his late 20s or early 30s, and authorities are working to find out whether residents and merchants in the area knew him.

“We don’t know what his name is or his identity,” Fitzpatrick said.

Detectives request that anyone with information regarding the stabbing contact the Nassau County Crime Stoppers at 800-244-TIPS. All callers will remain anonymous.