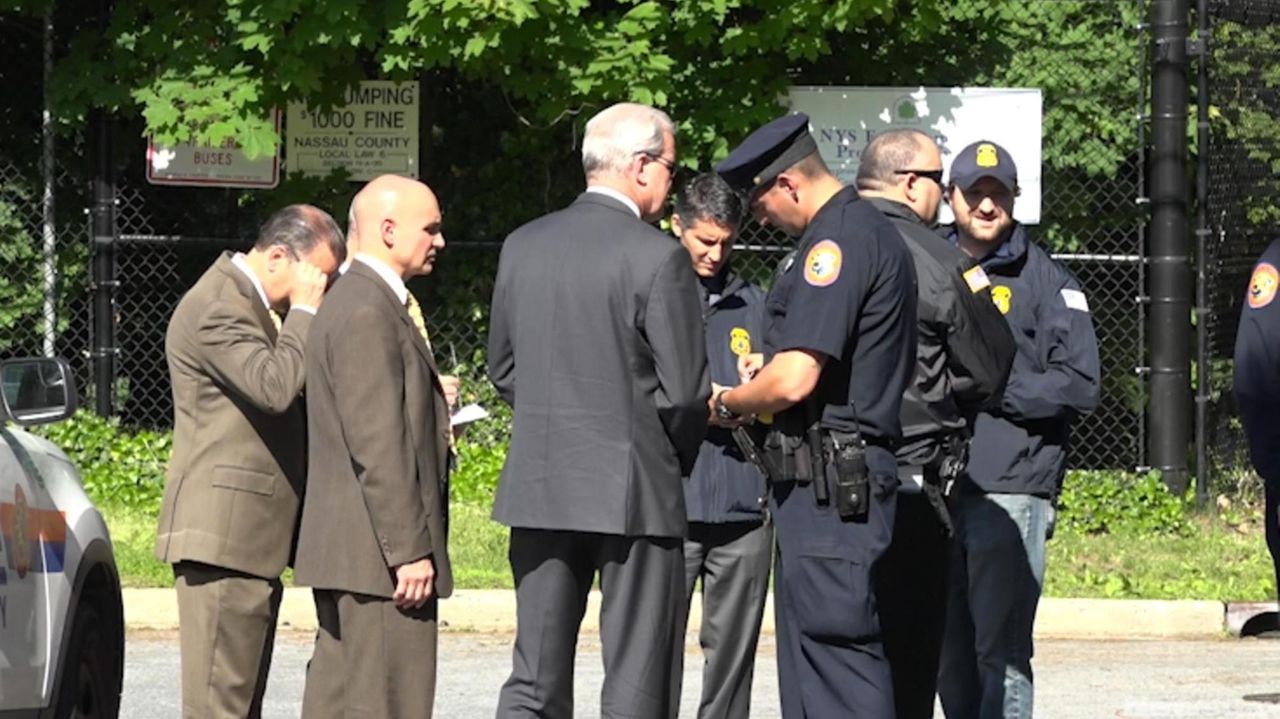 Nassau County Police Commissioner Patrick Ryder speaks at a press conference on Wednesday, May 30, 2018, following the discovery by county investigators of human remains inside the wooded area of a park in Roosevelt that they believe are those of someone killed by MS-13 gang members.  Credit: Howard Schnapp

This story was reported by Zachary R. Dowdy, Mark Morales, William Murphy and Ellen Yan. It was written by Yan.

Nassau police unearthed the remains of a suspected MS-13 victim in a wooded area in Roosevelt on Wednesday, authorities said, hours after an investigation into a machete murder last July led to the arrest of a Freeport man and the latest discovery.

The remains at the Roosevelt Preserve were said to be bone fragments, according to a law enforcement official, and were found about 1 mile into the park, in woods abutting Frederick Avenue.

“It is no doubt an MS-13 murder,” Nassau County Police Commissioner Patrick Ryder said outside the park during a news conference with County Executive Laura Curran and District Attorney Madeline Singas.

Ryder said police began digging Tuesday night at the preserve after getting information on the death of Angel Soler, 16, of Roosevelt, who left home on his mint green bicycle July 21 and was killed.

Officials did not did not provide details about the remains discovered Wednesday.

Ryder said the victim would have to be identified by DNA tests, and the discovery of remains should not “cause any kind of panic” in the community.

“The biggest concern we want people to know is, this is an older murder,” the police commissioner said.

Soler’s body was found in October in the woods off West Greenwich Avenue in Roosevelt, not far from Wednesday’s crime scene, and authorities suspect he was also killed by MS-13 members.

Josue Figueroa-Velasquez, 18, of North Main Street in Freeport, was arrested Tuesday and charged with second-degree murder in Soler’s death, the same charge faced by his alleged accomplices, David Sosa-Guevara of Wyandanch and Victor Lopez of Roosevelt.

Figueroa-Velasquez pleaded not guilty at his arraignment Wednesday. He was held without bail. He was represented by Legal Aid.

Singas, who would not divulge Figueroa-Velasquez’s specific role in Soler’s slaying, said he was on the verge of being deported when investigators came up with enough evidence to charge him with the crime.

Online records show a warrant was filed Tuesday for his arrest.

Court papers said Figueroa-Velasquez — while acting in concert with others — struck Soler with “a sharp cutting instrument believed to be a machete” and killed him.

“He played an integral part in this murder,” Singas said.

According to complaint filed against him, a fourth suspect is being sought in the Soler’s death.

Officials said they have been investigating several MS-13-related killings with Homeland Security agents, who were also at the news conference.

Sosa-Guevara was arrested in November, and he and Lopez were indicted in January, the district attorney’s office said. Last year, Soler’s mother, Suyapa Soler, told Newsday that she brought her son to the United States from Honduras four years ago to flee gang violence there.

Instead, Suyapa Soler and sources familiar with the case believe the teenager was killed by the MS-13 gang.

One law enforcement source had said last year that Sosa-Guevara had identified himself as an MS-13 member during previous contact with authorities.

Police did not release other details about the arrest of Figueroa-Velasquez. Soler’s death was part of a wave of killings blamed on MS-13 last year.

It led to authorities intensifying their desire to eradicate the gang and toughen up on immigration.