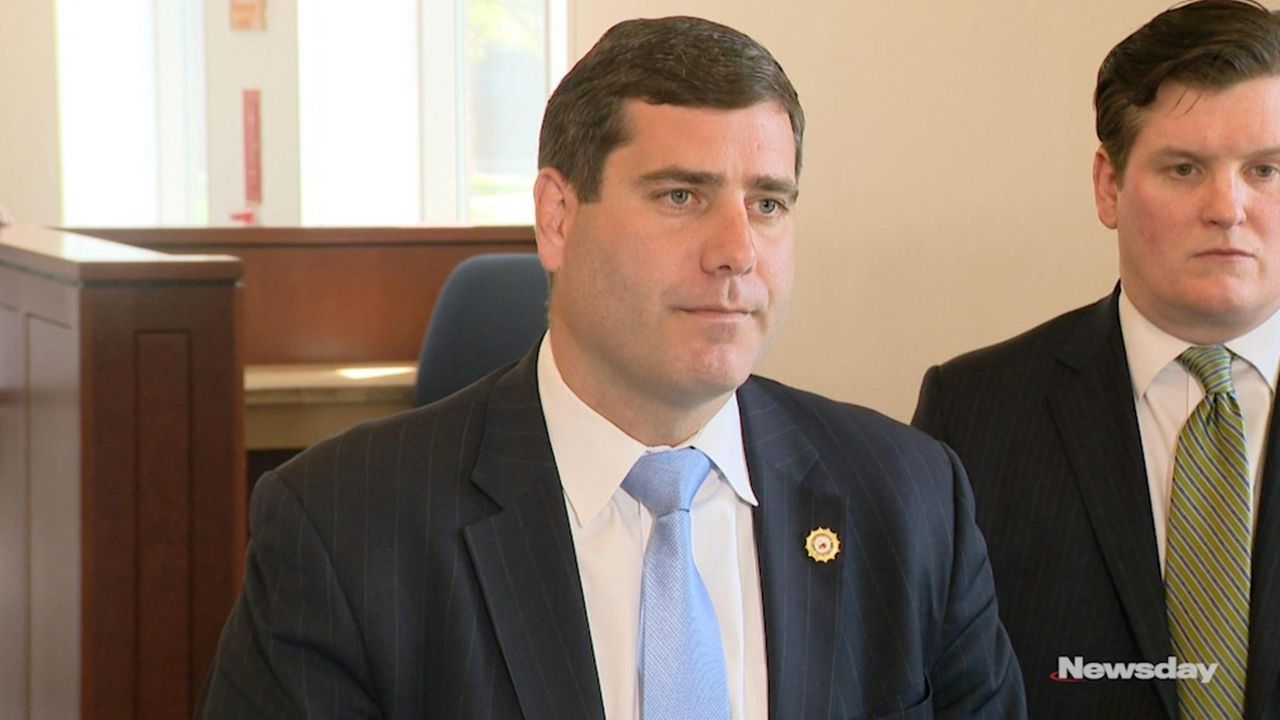 A 14-count indictment unsealed Thursday in Suffolk County Court in Central Islip charged Raymond Rodio III, 47, of Sound Beach, with sex trafficking and promoting prostitution, according to officials. According to the charges, Rodio conducted the illicit operation out of his parents' basement, but his father says he knew nothing about the alleged sex trafficking, to which Rodio has pleaded not guilty.  Credit: News 12 Long Island; James Carbone

A Sound Beach man used the addictive lure of heroin and crack cocaine to force nearly two dozen women into a prostitution ring he operated out of the basement of his parents’ home, Suffolk County prosecutors said Thursday.

Raymond Rodio III, 47, pleaded not guilty at his arraignment in Suffolk County court in Central Islip Thursday after prosecutors unsealed a 14-count indictment charging him with sex trafficking and promoting prostitution.

Prosecutors said Rodio operated a ring involving 22 women — mostly Suffolk residents in their 20s — from 2014 through February out of the windowless basement of the home on Lower Rocky Point Road. Rodio provided the women with crack and heroin when he met them. Once they became addicted, Rodio told the women he wouldn’t give them narcotics to ease their cravings unless they worked as prostitutes.

“If the victims refused a prostitution date, Rodio would intimidate them or threaten them, either with physical violence or by threatening to withhold drugs from them, which would force them to suffer from withdrawal,” Suffolk District Attorney Timothy Sini said at a news conference at the courthouse after Rodio’s arraignment.

State Supreme Court Justice Fernando Camacho ordered Rodio held on $1 million bail or $2 million bond. The Legal Aid Society of Suffolk County, which represented Rodio in court, declined to comment. Rodio, who is scheduled to return to court May 21, faces up to 25 years in prison if convicted on the top sex-trafficking count.

Rodio, who lived in the house, would keep the women against their will in the basement, which does not have a shower or a bathroom, for long periods of time, prosecutors said, and when they needed to relieve themselves, the women used a bucket.

“This is a dangerous and depraved individual,” Sini said. “He kept women locked up in the basement of his parents’ house, using the basement as a dungeon.”

Rodio also drove the women to nearby motels to meet clients, according to Sini, who said the flow of drugs made the women indebted to Rodio. The only way they could pay their debts, the district attorney said, was by performing sex acts with clients. The drugs were also used to cloud the victims’ judgment, he said.

The defendant took all of the money the women earned or a significant cut, and used some of their earnings to fund his own crack habit, Sini said. Rodio has been in custody since March 18, when he was arrested on drug charges.

Sini said Rodio’s parents, both 74, may not have known their son ran a prostitution ring. Prosecutors did not charge them with any crimes.

Both parents denied their son had used their basement as a brothel.

“There was nothing going on in my house,” said the defendant’s mother, Nancy Rodio.

Rodio’s father said his son has battled substance abuse issues for many years and acknowledged in the past he had sold and used drugs in the home.

“I tried to get him help,” Raymond Rodio said of his son, “but it did not work.”

Long Island has become a hotbed for human trafficking, according to victims’ advocates, due in large part to the opioid epidemic.

“People addicted to opioids are vulnerable and they need a constant fix,” said Keith Scott, the director of education for the Safe Center, a Nassau County agency that provides counseling and support to survivors of human trafficking. “Traffickers can control their lives by controlling their access to drugs.”

Some Crips and Bloods gang members are embracing trafficking because it is easier to evade law enforcement than the drug trade and is much more profitable, advocates said. Research shows victims can earn as much as $280,000 a year for their trafficker, Scott said.

“You can only sell a bag of coke once,” said Emily Waters, the Safe Center’s director of human trafficking programs. “You can sell a person numerous times.”

Sini said authorities began investigating Rodio after a Suffolk police officers made a routine traffic stop in August. Officers suspected a passenger in the car was a victim of human trafficking. An investigation by the department’s Human Trafficking Investigations Unit revealed the victim had been forced into sex work by Rodio in the spring of 2018.

“This man preyed on vulnerable women, using threats and drugs to manipulate them for his own financial gain,” Suffolk Police Commissioner Geraldine Hart said.

None of the women involved in the ring have been arrested, but the district attorney’s office said they will be connected to agencies to receive counseling and treatment if necessary.

Law-enforcement agencies across Long Island, including the Nassau and Suffolk police departments, have created units dedicated to combating sex trafficking in recent years and people involved in prostitution are now treated as victims who have been forced or coerced, not criminals. Waters said the vast majority of the human trafficking victims her agency treats have suffered from sexual abuse, physical abuse and other trauma.

Human trafficking courts in Nassau and Suffolk provide counseling and support to defendants arrested on prostitution charges, and criminal charges are dismissed if they complete their counseling programs and stay out of trouble.

“My office and the Suffolk County Police Department have shifted the paradigm in how we deal with these cases,” Sini said. “We treat the women as victims, because they are.”

Anthony Zenkus, the senior director of education and communications for the Victims Information Bureau of Suffolk, applauded the shift.

“The earlier way of doing things was not working,” Zenkus said. “People were cycling in and out of the system but nothing was really happening. When you deal with them as victims of trauma, things change.”

Zenkus said the next step is for law-enforcement to crack down on clients of prostitutes.

“The reason why pimps can say this is a high-profit, low-risk enterprise is because demand remains high,” Zenkus said.