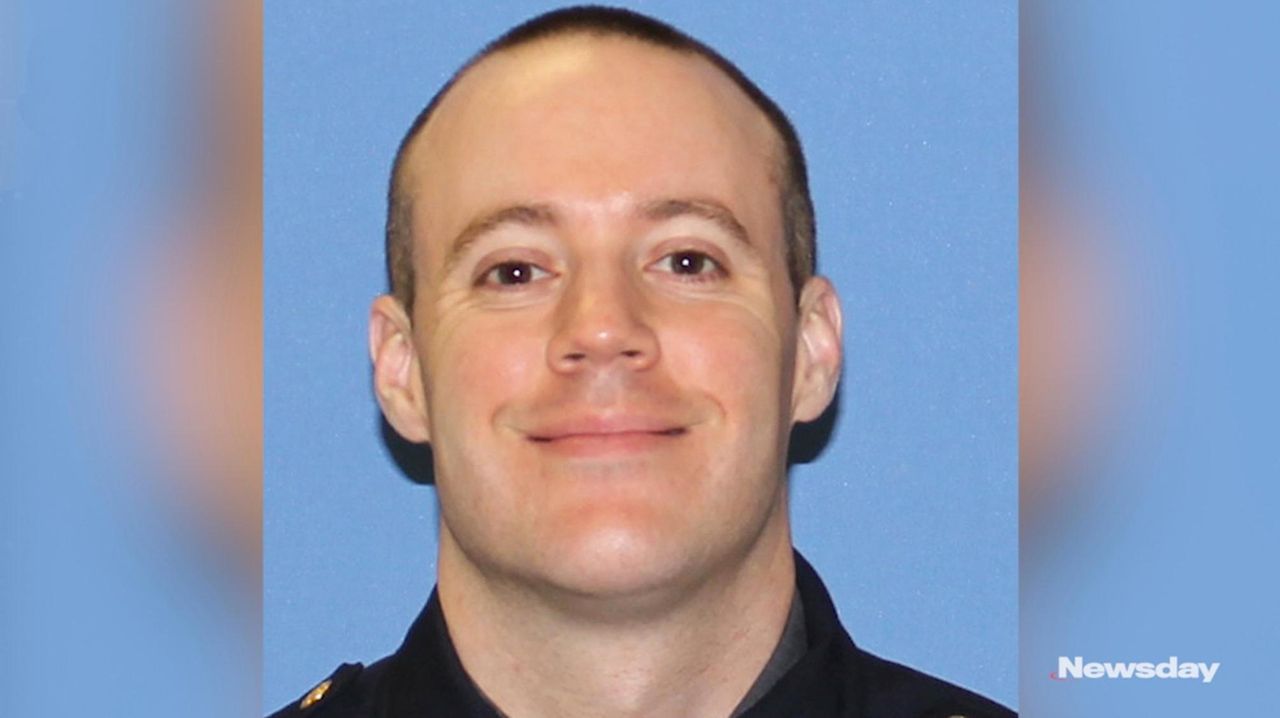 SCPD Officer Christopher Racioppo remained in critical condition Monday after he was stabbed in the leg on Saturday night. Officials praised Racioppo and those who came to his aid. Newsday's Cecilia Dowd reports. Credit: Howards Schnapp, James Carbone and Stringer News

The supervisor of the Suffolk police officer who suffered a near-fatal stab wound after struggling with a suspect in Patchogue Saturday said he feared the injured cop had died in the patrol car rushing him to the hospital.

Suffolk police Sgt. Frank Samartino said he ordered officers to transport Officer Christopher Racioppo to Long Island Community Hospital in a patrol car — rather than wait for an ambulance — because he feared the three-year police veteran was bleeding to death.

"At one point in the vehicle, we thought we had lost Officer Racioppo," Samartino said Monday at a news conference at the Suffolk County Police Academy in Brentwood.

Racioppo remained in critical condition Monday at Stony Brook University Hospital, according to Dr. James Vosswinkel, the head of trauma at the hospital as well as the Suffolk Police Department’s chief consulting surgeon and medical director. Vosswinkel said Racioppo suffered a severe injury and his recovery would be difficult, but he could make a full recovery.

"He will need rehabilitation," Vosswinkel said. "There are a lot more steps to make a full recovery."

Suffolk County officials praised Samartino and the other officers who gave aid to Racioppo at the scene of the stabbing and then rushed him to the hospital. Suffolk Police Commissioner Geraldine Hart called the officers "an example of the best of the best of the department."

Officials also credited Patchogue resident Guillermo Sandoval, a former Marine who helped stanch Racioppo’s bleeding, and Frank "J.R." Recupero, a retired NYPD detective who helped restrain the suspect until he could be arrested.

"When I think about the actions that took place that night, I could not be more proud of the actions of our officers but also the action of these Good Samaritans, Suffolk County residents who stepped up," Suffolk Executive Steve Bellone said.

The injured officer was in a marked patrol car late Saturday when he saw a 1999 Mercedes-Benz driving erratically with no headlights southbound on South Ocean Avenue, police said. When the officer attempted to stop the vehicle, the driver, Jonathan Nunez, 25, of Centereach, crashed into a 2004 Nissan at the intersection of South Ocean Avenue and Brook Street.

Nunez attempted to flee on foot but instead got embroiled in an altercation with the officer on the lawn of a South Ocean Avenue home. Nunez stabbed the cop during the struggle, police said, rupturing the officer’s artery.

When Samartino arrived at the scene and saw Racioppo, he knew the badly bleeding officer was in trouble and ordered cops at the scene to get him to the hospital.

"I held Officer Racioppo’s hand to see if he could follow my commands," Samartino said. "He was fading in and out of consciousness."

Bellone said the suspect could have injured or killed somebody with his reckless driving. "We don’t know the lives he helped save that night, but we do know this: Officer Racioppo is a hero," Bellone said.

The injured officer was transported to Long Island Community Hospital in East Patchogue and later transferred to Stony Brook University Hospital, where he underwent emergency surgery.

Nunez was admitted to Long Island Community Hospital for treatment of injuries. He was charged with aggravated assault upon a police officer, driving while intoxicated and resisting arrest.

Nunez had previously been arrested on assault and criminal mischief charges, both related to domestic incidents, police said. He is expected to be arraigned later this week, according to Suffolk County District Attorney Timothy Sini’s office.

"We are asking the residents of Suffolk County to keep Christopher and his family in their thoughts and prayers," said Noel DiGerolamo, president of the Suffolk Police Benevolent Association. "It is going to be a very long recovery process."

Quick thinking helped save Suffolk cop after stabbing, SCPD saysA Centereach man is in custody on multiple charges after police said he stabbed the Suffolk police officer, who is in critical but stable condition with a severe leg wound.