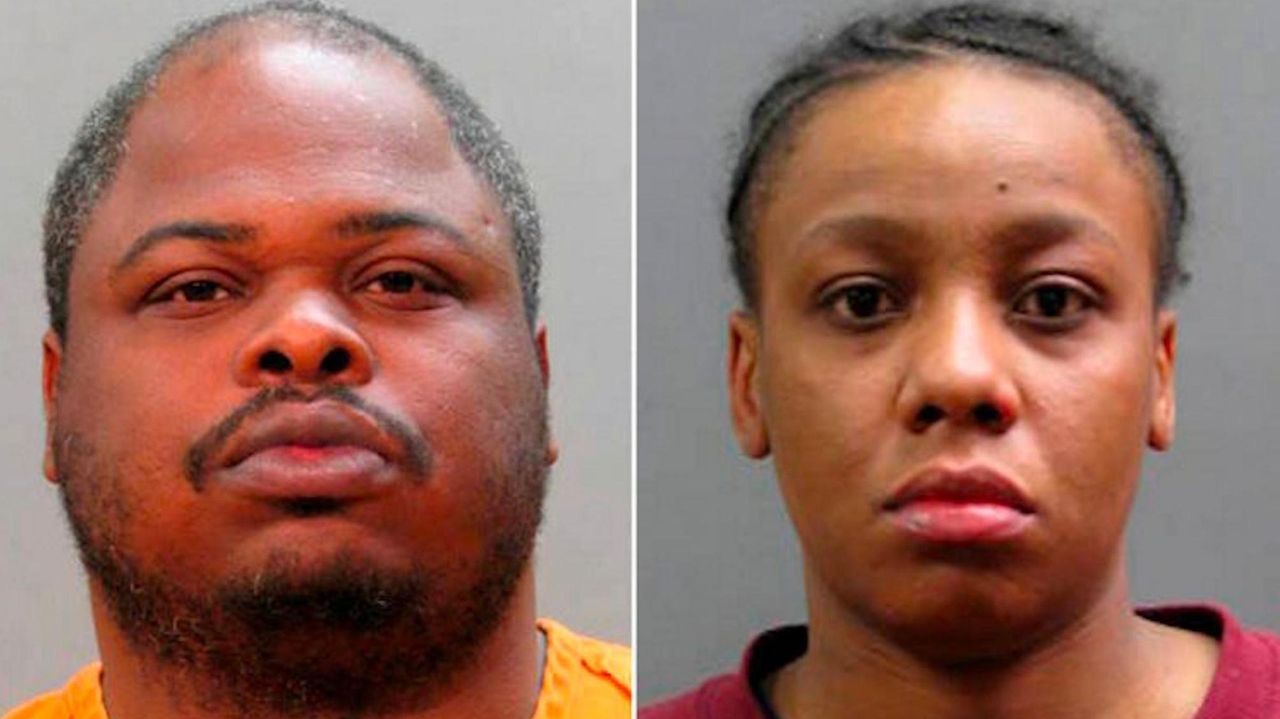 On Tuesday, a Brooklyn man was sentenced to 18 years to life in prison in the deaths of a young couple who died in a 2018 crash in Inwood just days after announcing their wedding plans. Rahmel Watkins, 36, was given the sentence by acting Nassau Supreme Court Justice Francis Ricigliano on felony charges of criminally negligent homicide and assault, along with misdemeanor charges of reckless endangerment and reckless driving. Zakiyyah Steward was also sentenced Tuesday, to 3 to 9 years in prison. Credit: Howard Schnapp, NCPD

A Brooklyn man was sentenced to 18 years to life in prison on Tuesday in the deaths of a young couple who perished in a 2018 crash in Inwood just days after announcing their wedding plans.

The sentencing of Rahmel Watkins, 36, came as anguished relatives of the victims spoke of their pain and one called the punishment too light. Watkins’ attorney in turn pleaded for leniency, saying Watkins had a troubled childhood, including his first arrest at age 15.

Authorities said Yisroel Levin, 21, was driving his fiancee, Elisheva Kaplan, 20, home from a Passover celebration around 1:40 a.m. on April 4, 2018, when Watkins’ BMW 550i GT hit Levin’s Nissan Altima head-on on the Nassau Expressway.

Watkins, who was speeding about 100 mph, passed a Hyundai Genesis that motorist Zakiyyah Steward was driving before his BMW hit a concrete island and crossed into oncoming southbound traffic, ramming the Altima, according to prosecutors.

Steward also was sentenced Tuesday to 3 to 9 years in prison.

Steward, 27, had previously pleaded guilty to charges that included aggravated vehicular homicide and driving under the influence of alcohol and marijuana.

Prosecutors said Watkins shared blame for the couple’s deaths with Steward — whose speeding car also struck the Altima — because of his reckless actions.

Joel Kaplan read an emotional victim’s statement in court, crying throughout as he recalled the daughter he loved, and the future son-in-law he already considered a son.

“She was beautiful and bright and full of the joy of life,“ he said.

“You have created a lifelong sorrow,” he told the defendants, noting that the couple’s bodies were burned beyond recognition. “Not an hour goes by that I don’t think of them,” he said, sobbing.

Outside the courthouse, his wife, Leah Kaplan, said, “You lose a parent, you’re an orphan. You lose a spouse, you are widowed. What do you call it if you lose a child? There is no word. There is no word to describe the ache and the pain. You live with it every day.”

Watkins did not speak in court, but his attorney, Joseph Lo Piccolo of Garden City, said Watkins “always showed remorse. It was something that was apparent from the day I met him. The reality is it was a tragic accident. Everything happened in a matter of seconds.”

He noted that as a child Watkins was passed from relative to relative, and home to home.

“The reality is Mr. Watkins never had a chance” to lead a productive life, he said. “It doesn’t mean he is beyond redemption.”

Steward read a short letter in court, telling the families, “I am sorry for your loss,” and that she hoped they could “find it in your heart to forgive. I pray for your family.”

She added: “I made a stupid decision.”

The judge, Ricigliano, said he had read a letter Watkins wrote to the court, and then recounted Watkins’ long criminal history. After all that time in jail and other consequences, he told Watkins, you “still failed to learn to conduct yourself as a responsible member of society.”

The fathers of the two victims had divergent opinions of the sentencing.

Samuel Levin said he thought the sentence for Watkins was too lenient.

“The judge had the opportunity to do the right thing and to give 25 years, “ Levin said outside of court. “He chose instead to only give 18, compassion for the criminal. Where was the compassion to Yisroel and Elisheva?”

But Joel Kaplan said he thought the sentence was sufficient.

“I think that 18 years is a long time for anybody to be away, “he said. “Frankly, if he is not a model prisoner, then it will be longer than 18 years.”

Earlier in court, though, referring to both defendants, he told the judge, ”Keep them far away from civilized society. Protect us.”

Nassau County District Attorney Madeline Singas, speaking outside court, said the defendants “took two stars, so young, so innocent, away from their families. “

She added that “the message is also clear, that the people who use our roadways deserve safe passage. And if you are going to ride our roadways impaired or recklessly speeding, you will be held to account in this county.”

Lo Piccolo said Tuesday night by email that his client "will live with the consequences of his actions for the rest of his life and can only hope the victims and their families eventually find peace from this tragedy."