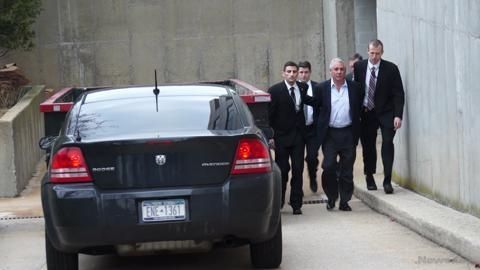 James Burke, the former Suffolk County police chief of department, was arrested Wednesday on charges of assaulting a handcuffed suspect and conspiring to cover it up during a federal grand jury investigation, according to court documents.

Burke was arrested in the driveway of his St. James home at dawn, handcuffed, and taken for booking following a probe by special criminal investigators reporting to the U.S. attorney’s office for the Eastern District and the FBI.

A federal judge remanded Burke, who resigned in October, to the Metropolitan Detention Center in Brooklyn to be held in protective custody.

Robert Capers, the Eastern District’s U.S. attorney, said at a news conference at the federal courthouse in Central Islip before the arraignment: “I wish to make clear no one is above the law . . . certainly not the highest-ranking uniformed officer in the Suffolk County Police Department.

A letter filed by Assistant U.S. Attorneys James Miskiewicz and Lara Treinis Gatz asking that Burke be kept in custody, argued that his actions went far beyond those charged in an indictment and showed that the former chief should be detained as a danger to the community, pending trial.

In doing so, U.S. District Court Judge Leonard Wexler said he was concerned that the assertions in the bail letter were so prejudicial that they might impede Burke’s chances for a fair trial. Wexler granted an initial defense request to bar the public from attending a bail hearing Friday “in order to protect the rights of the defendant.”

Burke pleaded not guilty to the charges of one count of deprivation of civil rights and one count of conspiracy to commit obstruction of justice.

Asked whether anyone else in Suffolk law enforcement is being investigated or will be indicted as a result of the Burke investigation, Capers said that the probe is continuing.

The indictment accuses Burke of beating a handcuffed prisoner, Christopher Loeb, and then enlisting unnamed officers and others in a massive cover-up of the alleged assault.

Loeb, who is called John Doe in the indictment, had been arrested for stealing a duffel bag from Burke’s department SUV parked in front of the chief’s home early on Dec. 14, 2012.

Later on Dec. 14, Burke and other officers arrived at Loeb’s Smithtown home, retrieved the bag and took Loeb into custody. Loeb was then taken to the Fourth Precinct, where prosecutors say he was assaulted.

The bail letter said “Burke regaled a group of officers with his account of the assault, saying it reminded him of his ‘old days’ as a young police officer, and referred to detectives who were present during the assault of a defenseless prisoner as his ‘palace guards.’ ”

The indictment charges that Burke, “together with other members of the SCPD, met on multiple occasions to discuss John Doe’s assault allegations and agreed to conceal Burke’s role in the assault by, among other means, agreeing to provide false testimony under oath about the assault, and agreeing to provide false information and to withhold relevant information from the FBI and the federal grand jury investigating the assault.”

The letter also alleged that Burke asked police officers assigned to a federal task force to spy on whoever might be cooperating with federal prosecutors and agents on the case against him.

It charges that he tampered with evidence, engaged in a cover-up of an automobile accident in which he had been intoxicated; had a retribution list of officers he considered disloyal and instituted a “climate of fear [in the department] to protect his interests.”

Before arraignment, Burke’s Mineola attorney Joseph Conway “vigorously” denied that “there was, is, ever has been a cover-up” or that his client had done anything untoward. Conway said Loeb, whom the attorney described as a two-time felon, made up the story of the assault.

Conway said he spoke to Burke on Wednesday.

“His spirits are high,” Conway said. “He looks forward to defending himself in court.”

Loeb pleaded guilty to the theft of the duffel bag and was sentenced to 3 years in prison. He was released in July.

“I’m glad justice is prevailing,” Loeb said in an interview Wednesday. “The truth is going to come out. I’m going all the way with this, and I’m cooperating with investigators all the way through . . . He deserves what he is getting. I’m not a choir boy, and what I did was wrong. I paid my dues and I did my time. I’m moving forward with my life.”

Capers said that Burke and others pressured the detectives who witnessed the interview room assault “to conceal the event.”

Burke “shockingly” asked one detective to falsely testify under oath, Capers said at the news conference.

Asked whether the police department has an inherent culture that leads to such conduct, Capers said his office was investigating only criminal conduct. “We don’t investigate the culture of anybody,” he said.

Diego Rodriguez, the head of the FBI in New York, said: “Today, former Suffolk County Police Chief James Burke finds himself on the opposite ends of the very laws he was sworn to uphold. . . . We vow never to forget our obligation to remove from the criminal justice system those who don’t uphold the tenets of the legal system.”

A Suffolk police department spokesman said the department does not comment on ongoing investigations.

Burke’s arrest and arraignment came nearly three years to the day after the alleged 2012 assault on Loeb and one day after a the grand jury indictment was handed down.

The indictment also says that Burke, “together with others, did knowingly, intentionally and corruptly conspire to obstruct, influence and impede an official proceeding,” referring to the federal investigation.

The grand jury that led to Burke’s arrest began hearing evidence and testimony in the late spring to look anew at the case. It replaced an initial grand jury that had investigated the case without bringing any charges and that had remained dormant since the beginning of 2014. A group of investigators who report directly to the US. attorney were added to assist the new grand jury in its work.

Each U.S. attorney has a handful of investigators, unattached to any other law enforcement agency, who work on special or sensitive assignments directly for him or her.

Newsday reported on the new grand jury probe in October.

Several dozen officers were present at Loeb’s home or the Fourth Precinct when Loeb alleged officers first beat him at home and then officers and Burke beat him at the precinct.

But apparently none of those officers provided sufficient information for any indictment by the first grand jury, sources said.

At least three officers have been identified by sources as now cooperating with the current grand jury. Their attorneys have declined to comment when contacted by Newsday.

Authorities have said it contained a department gun belt with ammunition, handcuffs, a whistle and a box of cigars.

At the hearing, Loeb testified first that when he was held in a room at the Fourth Precinct, two officers punched him in the face and ribs when he asked for a lawyer, and one of the officers said he would rape his mother.

That officer has denied making such a statement.

Later Loeb said, Burke walked into a room and ordered the officers there to leave.

If convicted, Burke faces up to 5 to 5 1⁄2 years in prison under sentencing guidelines, prosecutors said.