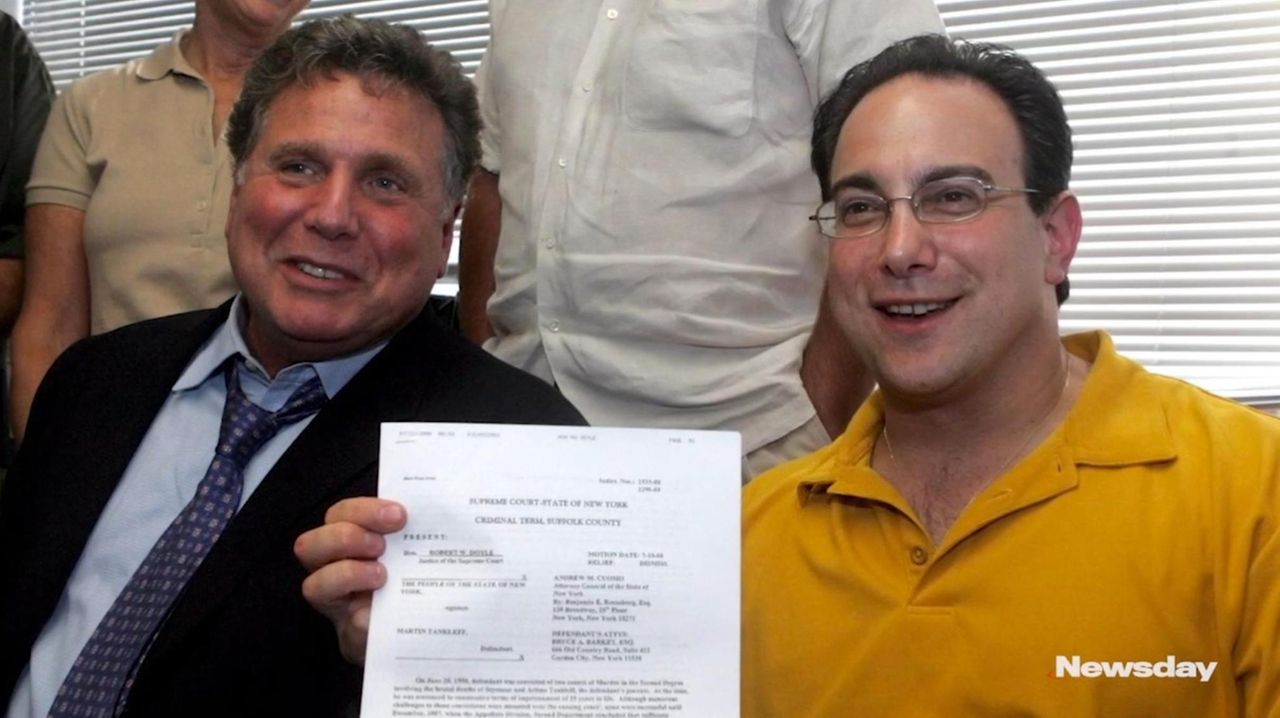 According to the Nassau district attorney, Jay Salpeter tried to get more money from his former client, Martin Tankleff for being his private investigator. Credit: James Carbone

Private investigator Jay Salpeter, who helped Martin Tankleff overturn his conviction for killing his parents after he spent 17 years in prison, is now facing criminal charges connected to his work on the infamous Suffolk County murder case.

Salpeter, 69, of Glen Cove, pleaded not guilty on Monday to three counts of attempted grand larceny by extortion and two counts of aggravated harassment after investigators led him into a Nassau County Court arraignment in handcuffs.

The former NYPD homicide detective tried to carry out a "shakedown" of Tankleff over three years — threatening to physically harm him and destroy his reputation — in an attempt to get more money for investigative services he provided years ago, according to the Nassau district attorney's office.

The defendant sent "chilling" emails and voice mails to Tankleff, asking for sums of money that included $100,000 and $200,000 and threatening to go public with a statement saying he thought he had made a mistake and Tankleff actually had killed his parents, prosecutor Kelsey Lorer said in court.

Defense attorney Thomas Liotti told acting State Supreme Court Justice Felice Muraca that Salpeter "was instrumental in breaking the Tankleff case wide open" and was never adequately paid for his services. He also said his client was embarrassed and the matter "should have been resolved in civil court."

Liotti said later that his client earned $5,000 for his work on the Tankleff case and Tankleff and his lawyers "got millions."

The defense attorney said Salpeter was only asking for "some reasonable compensation for his time and efforts," saying his client's actions "never amounted to a serious threat or anything that Marty should be concerned about."

Salpeter, who is facing up to up to 2⅓ to 7 years in prison on the only felony charge against him, declined to comment. The judge released him from custody and signed an order requiring him to stay away from Tankleff.

Tankleff said in a statement Monday that Salpeter "was instrumental in efforts that led to my freedom" and for that he was "profoundly grateful." But he called Monday "a sad day" and added that "what transpired over the past several years was not acceptable and had to stop."

Tankleff, who went to law school after his prison release, was sworn in as an attorney last year after passing the state bar exam in 2017.

When he was 17, Tankleff had confessed during police questioning to killing his parents, Seymour and Arlene Tankleff, in the family's Belle Terre home in 1988. But the next day, he recanted the admission, refused to sign police statements and instead accused a business associate of his father's in the slayings.

While the business associate owed Seymour Tankleff more than $500,000, Suffolk prosecutors and detectives never seriously considered him a suspect. The prosecution's case rested largely on the recanted confession, conflicting statements made by Tankleff and blood found on his body.

Tankleff was serving 50 years to life in prison following his 1990 conviction when he wrote a letter to Salpeter in 2000 asking him to do some work on his case for free, Newsday previously reported. Salpeter then found evidence that men connected to Seymour Tankleff's business associate could have committed the crime.

A Suffolk judge disagreed, but an appellate court set aside Tankleff's conviction in 2008 and Suffolk prosecutors declined to retry him.

In 2018, Tankleff won a $10 million settlement from Suffolk County after filing a lawsuit that claimed detectives who investigated the murders fabricated a false confession. He also got a more than $3 million state settlement.