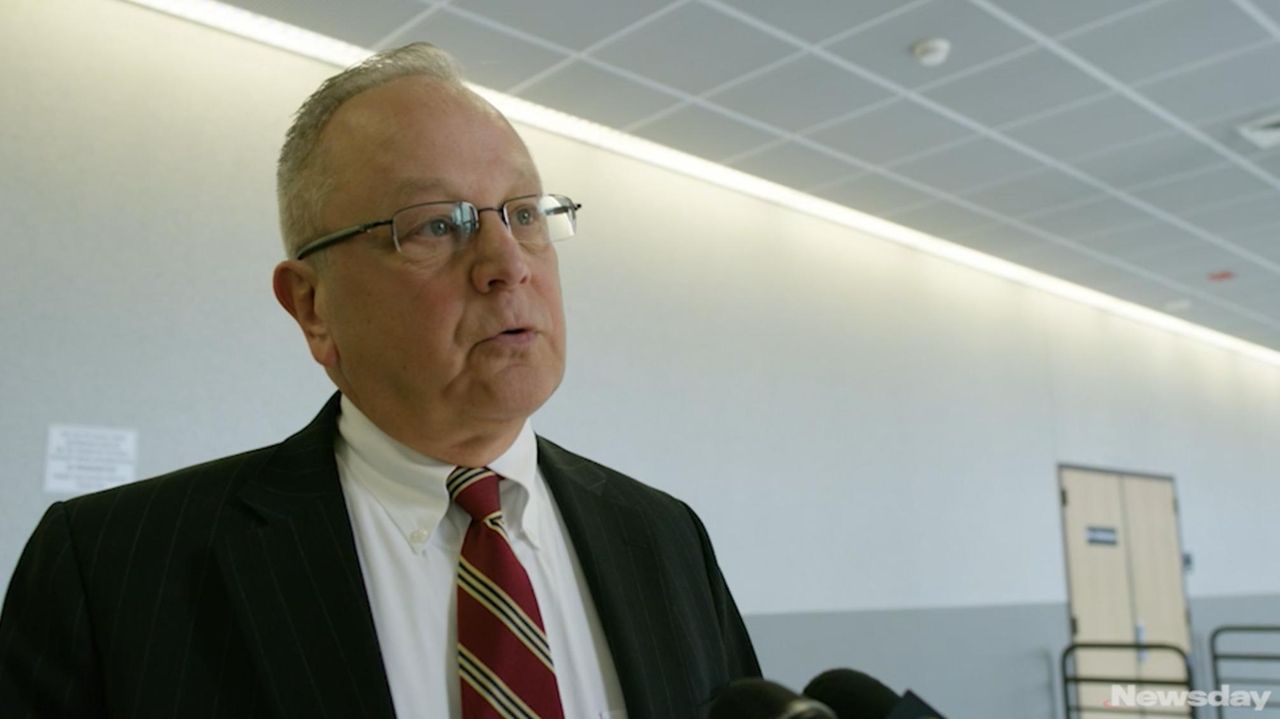 Suffolk County Assistant District Attorney Robert Biancavilla discussed the case of John Bittrolff, a Manorville carpenter who was sentenced to 50 years to life in prison on Tuesday, Sept. 12, 2017, in the deaths of Rita Tangredi and Colleen McNamee. Credit: Newsday / Chris Ware

The Manorville carpenter convicted of strangling and bludgeoning two women to death more than two decades ago was sentenced to 50 years to life in prison yesterday after he silently faced the victims’ family members who called him an animal.

A jury found John Bittrolff, 51, guilty in July of two counts of second-degree murder in the deaths of Rita Tangredi, 31, of East Patchogue, and Colleen McNamee, 20, of Holbrook.

Tangredi’s son, Anthony Beller, struggled to keep his composure as he spoke to Bittrolff in a Riverhead courtroom.

“What do you say to the person who killed your mother?” Beller said. “Forgiveness — I do hold some forgiveness for you, John Bittrolff. But I also believe in justice.”

He said Bittrolff had stolen his mother from him and his family when he was 11 years old, leaving him to explain years later to his children what happened to their grandmother.

“You are the monster in that story,” Beller said. “All I see [looking at Bittrolff now] is an unremorseful animal.”

Thomas McNamee Sr., one of Colleen McNamee’s brothers, told Bittrolff: “You’re a liar. You’re an animal. You’re a disease to society, a killer who will always pose a threat to society.”

McNamee’s father, Lawrence McNamee Sr., asked state Supreme Court Justice Richard Ambro to “consider not only the killing, but the brutality and the showmanship” of the murders.

Bittrolff did not speak in court.

Outside the courtroom later, Assistant District Attorney Robert Biancavilla said that Bittrolff not only hated women, but all living creatures. He said Bittrolff, a hunter, had once wrestled a pig to the ground and slit its throat. He also once cut out the heart of a deer he had just shot and ate it raw in the woods, Biancavilla said.

In response to a reporter’s question, the prosecuter added that Bittrolff likely has killed other women.

“I suspect there are other victims out there. This is behavior that he’s comfortable with,” he said.

He compared the 20-year-old case to the unsolved Gilgo Beach killings , in which remains of 10 bodies, including those of several sex workers, were found in roadway brush and other places.

“I suspect that there are aspects of the Gilgo investigation that are similar to the manner in which Mr. Bittrolff committed these crimes,” said Biancavilla.

He did not elaborate and did not offer evidence in support of the claim.

Tangredi was killed Nov. 2, 1993, and McNamee some time before her body was found in Shirley on Jan. 30, 1994. Both women, who worked as prostitutes, were beaten severely in the head and strangled.

Their bodies were posed similarly at both crime scenes, with their clothes nearby, except for one shoe each and their underwear.

The women’s killings remained unsolved for two decades until Suffolk homicide detectives were able to get a DNA sample from Bittrolff that matched semen recovered from both bodies.

Biancavilla said Bittrolff chose Tangredi and McNamee because he thought no one would care about them.

Defense attorney Jonathan Manley of Hauppauge wouldn’t comment on the allegations but said his client continues to insist on his innocence.

“From day one in this case until now, Mr. Bittrolff has said one thing — that he did not do this,” Manley said.

He promised to file an immediate notice of appeal.

Ambro suggested it was cruel to prey on women on the fringe of society.

“These families had hoped that some day they would turn their lives around,” Ambro told Bittrolff.

“You crushed their skulls, strangled them and left them naked in the cold woods. You are evil, Mr. Bittrolff,” Ambro said.

The defense argued during the trial that except for the DNA, no witnesses or evidence connected Bittrolff to the women. He married soon after the killings and raised two children while leading an apparently law-abiding life until his arrest in 2014.

That came after one of Bittrolff’s brothers was convicted in an unrelated criminal contempt case and had his DNA entered into the state database.

It indicated that a relative of the brother was the person who left DNA behind at both crime scenes.