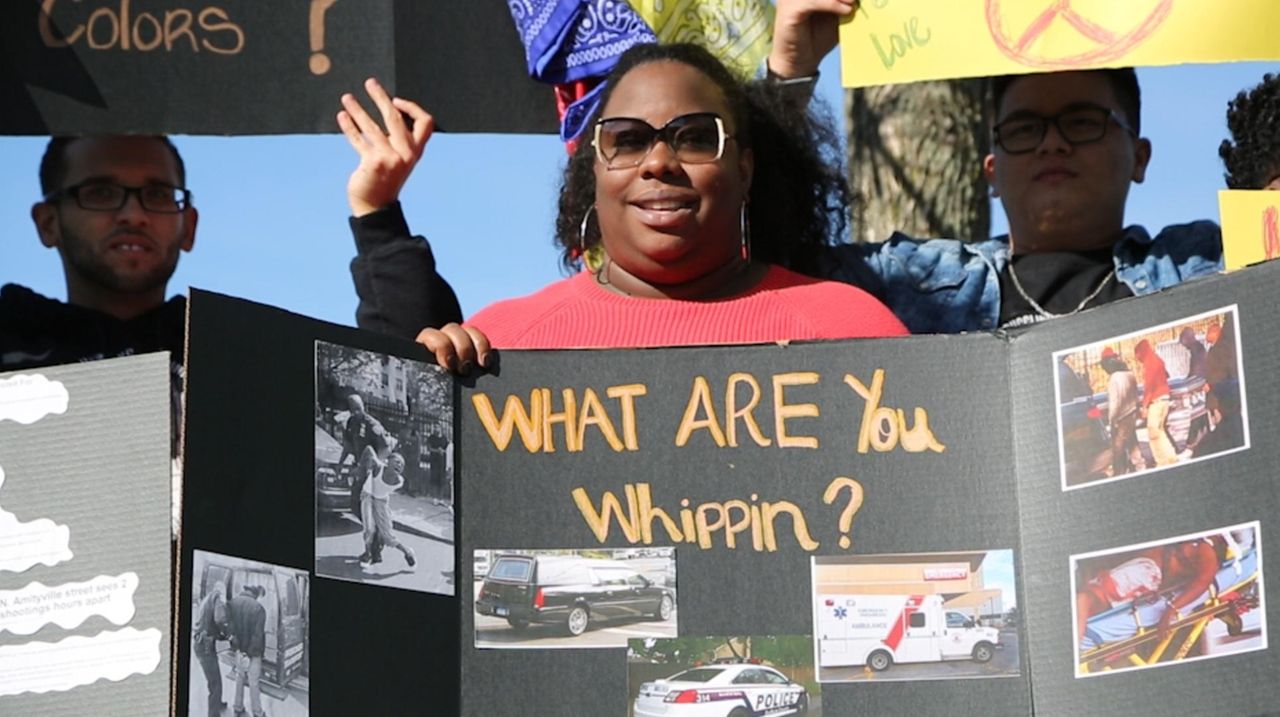 Activists held a rally on Monday, April 10, 2017, outside of the federal courthouse in Central Islip calling for peace and unity in Brentwood, Central Islip and other Long Island communities.  The rally occurred as a court proceeding in the case against four alleged MS-13 gang members accused of killing two Brentwood teenage girls took place inside. Credit: Barry Sloan

A federal judge Monday asked prosecutors and defense attorneys to formulate arguments on why four gang members charged with murder in the deaths of two Brentwood teenage girls should or should not face the death penalty.

Federal prosecutors John Durham, Raymond Tierney and Paul Scotti declined to comment after Monday’s status conference, as did attorneys for the four who could be reached.

The judge set the next hearing for July 17.

Officials said the four adult members of MS-13 charged in the Cuevas and Mickens killings are Alexi Saenz, 22, of Central Islip, the head of a gang clique, or chapter; his brother, Jairo Saenz, 19, also of Central Islip, the second-in-command of the clique; Enrique Portillo, 19, of Brentwood; and Selvin Chavez, 19, also of Brentwood, officials said. The four have pleaded not guilty and remain held without bail pending future hearings.

Federal death penalty cases are rare, and the only person to receive a federal death-penalty sentence in New York in the past 50 years had that sentence overturned.

Ronell Wilson was convicted of the 2003 execution-style slayings of two NYPD detectives. But a federal judge in Brooklyn reluctantly overturned the death sentence in 2016, saying a Supreme Court decision indicated Wilson was too intellectually disabled to be executed.

On Monday, family members of the two slain Brentwood teens packed the courtroom but declined to comment after the hearing. A few dozen community activists, meanwhile, held a rally outside the courthouse calling for peace and unity in Brentwood, Central Islip and other Long Island communities.

The speakers said local and national policies emphasizing incarceration and law enforcement over education and social services shaped the environment that led to the girl’s deaths.

“Why can’t we get the type of empathy kids who put syringes in their arm get?” Argueta asked.

Feride Castillo, the director of advocacy for Empowerment Collaborative of Long Island, said adults should think about the problems they faced in childhood and become the people they needed growing up.

“I was one of those kids,” said Castillo, who’s from Central Islip. “I was lost, I was abused, I was a throwaway kid. We need to embrace our kids or we will lose our kids. I’m standing here in peace and love because that is what our kids need.”

The girls’ killings were among as many as six other recent killings or disappearances in the Brentwood area that may involve MS-13 members and are under investigation, sources have said.

Cuevas was “involved in a series of disputes” in person and over social media with MS-13 members and associates in the months before the killings, prosecutors said in court papers.

At the time of the killings, the four MS-13 members, as well as two other unnamed juveniles charged, had gone “hunting for rival gang members to kill” when they came across Cuevas and Mickens, court papers said.

Because the four face the possibility of life in prison or the death penalty under federal law, U.S. District Judge Joseph Bianco appointed a second lawyer who specializes in defending death-penalty cases to represent them. This is standard procedure in federal cases.

The names and proceedings involving the two juveniles also charged in the killings have not been released, which is also standard in federal cases. Two other adult MS-13 gang members and a juvenile were charged in March, along with those accused in the girls’ killing, with the separate killing of a fellow MS-13 member. The victim was suspected of violating gang rules in a number of ways, including talking to law-enforcement, officials said.

The juveniles in both cases eventually could be tried as adults, but that would require a ruling by a judge.

The two recent cases were added to an indictment charging other gang members with four other killings between 2013 and 2015.

CORRECTION: A previous version of this story incorrectly said arguments on the potential for the death penalty were due by July 17.