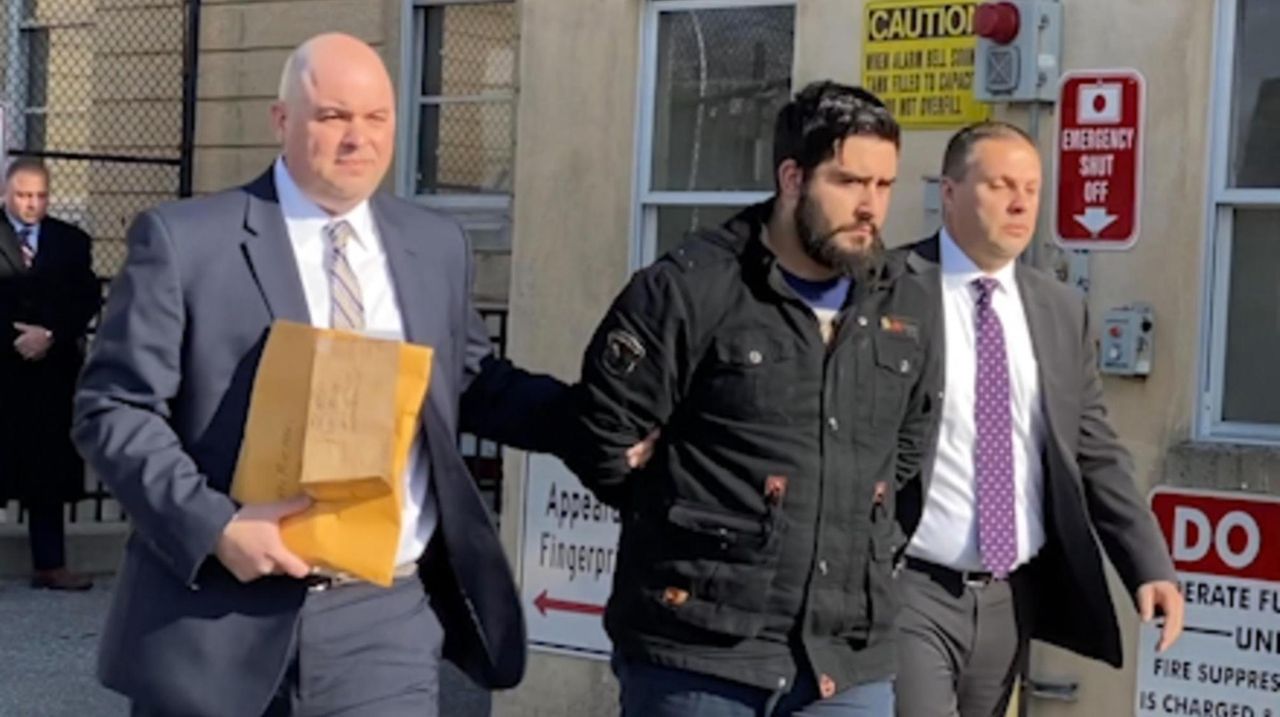 Nassau County police held a news conference Wednesday to discuss the arrest of Michael Owen, 27, of St. James, in connection with the death of his estranged wife, Kelly Owen, also 27, who was found strangled in her home on Jan. 15. Credit: Howard Schnapp

A nursing student was strangled by her estranged husband in her parents’ South Farmingdale home earlier this month after the couple argued over money, health insurance — and the child they were expecting, Nassau County police said Wednesday.

The man, Michael Owen, 27, of St. James, was arrested Tuesday, police said. At an arraignment Wednesday, he was ordered jailed without bail, according to Miriam Sholder, a spokeswoman for the county district attorney, whose office is prosecuting the case.

Sholder said Owen was represented by the Legal Aid Society. The organization has a policy of not commenting to the press on its clients' behalf.

Owen is charged with second-degree murder in the death of the woman, Kelly Owen, 27, according to Stephen Fitzpatrick, head of the police homicide squad.

“All the signs and evidence point to Michael,” he said at police headquarters in Mineola.

“I believe he went there with the intent to kill her that day,” Fitzpatrick said.

Kelly had been living with her parents, and the couple’s 6-year-old daughter, since last January. The couple married in 2013 and legally separated in March 2018, Fitzpatrick said. Less than a year later, in December 2018, an argument about money triggered a domestic violence complaint. No order of protection was issued, Fitzpatrick said.

Despite their separation, the couple continued a relationship that Fitzpatrick described as both physical and intimate. Michael, however, had formed a new bond with another woman who moved in with him, Fitzpatrick said.

Kelly, planning to enroll in nursing school, qualified for the health insurance Michael obtained by working for a company that erects cellphone towers, Fitzpatrick said. That was not a benefit he wished to share, despite the baby she was expecting that she believed he had fathered, Fitzpatrick added.

Kelly Owen was found in her bed around 3:40 p.m. Jan. 15 after police responded to her home on First Avenue for a report of a female not breathing. An ambulance technician pronounced her dead at 3:50 that day, police said.

The South Farmingdale community ”came together,” providing a multitude of tips — some through Crime Stoppers — that aided the police investigation, Fitzpatrick said.

“Everybody in that neighborhood came forward, whether they had a video or saw something,” he said, calling their help “fantastic.”

At Owen's arraignment, the judge, Paul Meli, issued a stay-away order of protection on behalf of the daughter, Sholder said.

Cops: Student found dead after missing daughter's school pickupNursing student Kelly Owen, 27, was found in her South Farmingdale home after she failed to show up to her daughter's after-school program, Nassau police said.