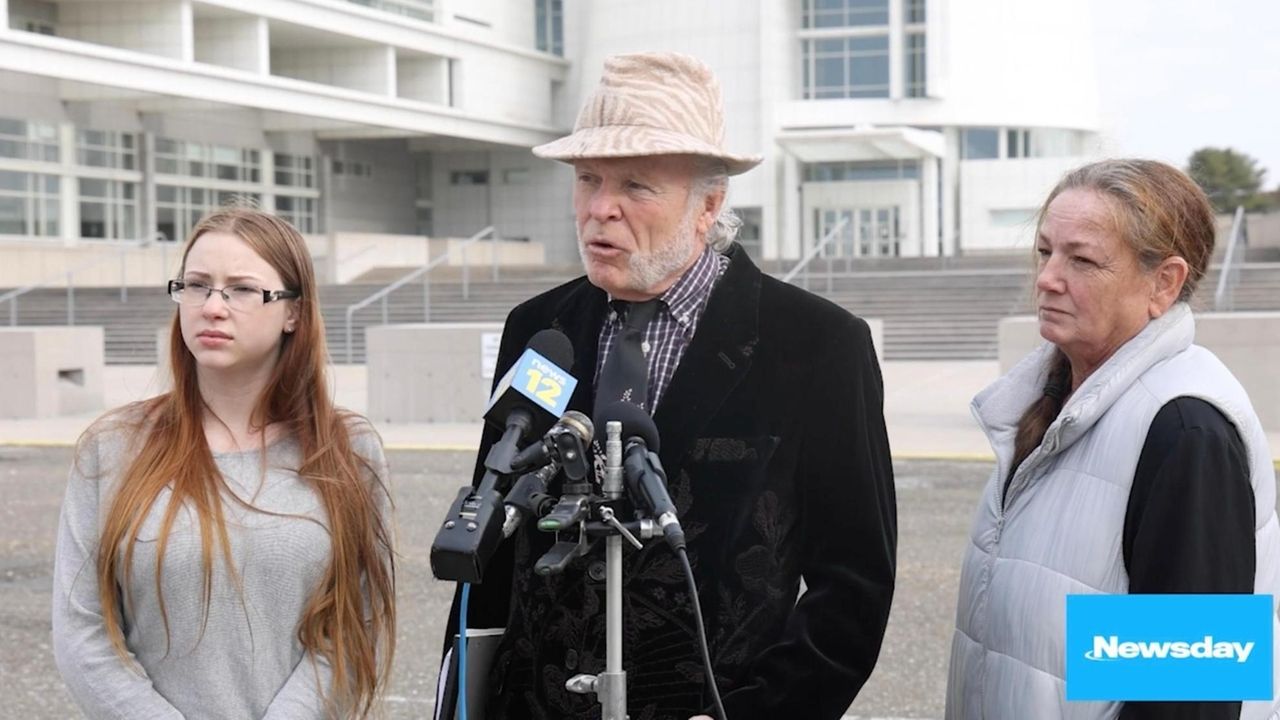 Attorneys for Rebecca Schaefer and Vincent Trimarco Jr. spoke outside of the courthouse Thursday after Trimarco was sentenced for looting $2 million from Schaefer's estate when she was four years old. Credit: Howard Schnapp

A judge sentenced a Smithtown lawyer to nearly five years in prison Thursday for a scheme in which prosecutors said he stole $2 million of a child’s inheritance from a settlement for her father’s Suffolk jail custody death.

"The rightful heir has not received a penny," U.S. District Court Judge Joan Azrack said while sentencing Vincent Trimarco Jr. to 57 months behind bars for behavior she called "particularly reprehensible because he is an attorney."

The judge said greed motivated Trimarco, 52, and that he used money that belonged to Rebecca Schaefer to fund a lifestyle of excess while the young victim was deprived of a comfortable upbringing.

Assistant U.S. Attorney Catherine Mirabile asked Azrack to punish the defendant within a sentence range of 46 to 57 months in prison that was calculated in October 2020 when Trimarco pleaded guilty.

He admitted to conspiracy to commit mail and wire fraud as jury selection was underway in his trial.

The judge also ordered Trimarco to pay $1.5 million in restitution to Schaefer and to forfeit another $1.5 million in proceeds from his criminal activity. She told him to surrender to prison officials Jan. 7.

The FBI arrested Trimarco in 2017 after an attorney for Schaefer, now a 20-year-old single mother of two, brought the scheme to the agency's attention after he couldn’t collect the settlement money from Trimarco.

That Miller Place attorney, John Ray, had come forward in 2012 to say that his young client was actually the heir of Scott Eriksen — the year after Eriksen's father Gary collected a $3 million civil settlement from Suffolk County as the deceased's supposedly closest heir.

Ray spoke in court on Schaefer's behalf Thursday as she sat nearby, telling the judge about her "extremely modest" upbringing with her grandmother and how she "never got that money to be able to make a life."

A lawyer for Trimarco previously said the defendant was unaware of the daughter’s existence until six years after her father’s death and that Trimarco had fought to get the county settlement money.

Scott Eriksen died when Schaefer was 5 years old, after what his family claimed was a brutal beating while the 20-year-old man was jailed in 2005 on a misdemeanor drug charge.

She was born after a relationship he had with her mother, a neighborhood teenager, Newsday previously reported.

Prosecutors said Trimarco controlled bank accounts holding the $2 million in settlement funds that went to Gary Eriksen after legal fees, while also dominating most other aspects of Eriksen’s life by paying his bills and rent and receiving his mail.

The two used the settlement money to buy a $200,000 Ferrari, a $57,000 Jaguar and three real estate properties in Suffolk, while investing $800,000 in a Patchogue nightclub, prosecutors said in court records.

Azrack said Thursday that Trimarco also fed Gary Eriksen’s prescription painkiller habit, even sneaking OxyContin to him when he was in jail.

Prosecutors said Trimarco and Gary Eriksen ignored Surrogate’s Court orders in 2012 that determined Schaefer was the proper heir and orchestrated a scheme to defraud the daughter of her inheritance after her attorney sued to try to get the money.

Trimarco pulled Gary Eriksen into the conspiracy, with the attorney setting up shell corporations to conceal transactions made using settlement funds, according to prosecutors.

Gary Eriksen, who was named in the criminal case as an unindicted co-conspirator, died before a grand jury indicted Trimarco.

Trimarco’s attorney, Jeffrey Lichtman, asked Azrack on Thursday to consider his client’s record of pro-bono legal work, including on behalf of veterans, along with his service in the New York National Guard.

He also said his client suffered from alcohol and substance abuse issues and asked the judge to consider that "his crimes are a part of what he is but it’s not completely what he is."

Trimarco told the judge he had "learned valuable lessons" and his actions were "not indicative" of him "as a man." He also said he would do everything he could "to make restitution."

Schaefer declined to comment later, but Ray called the restitution "a paper judgment" and said his client would be lucky if she got any money.

But with Trimarco now heading to federal prison, in a way justice was served, he added.