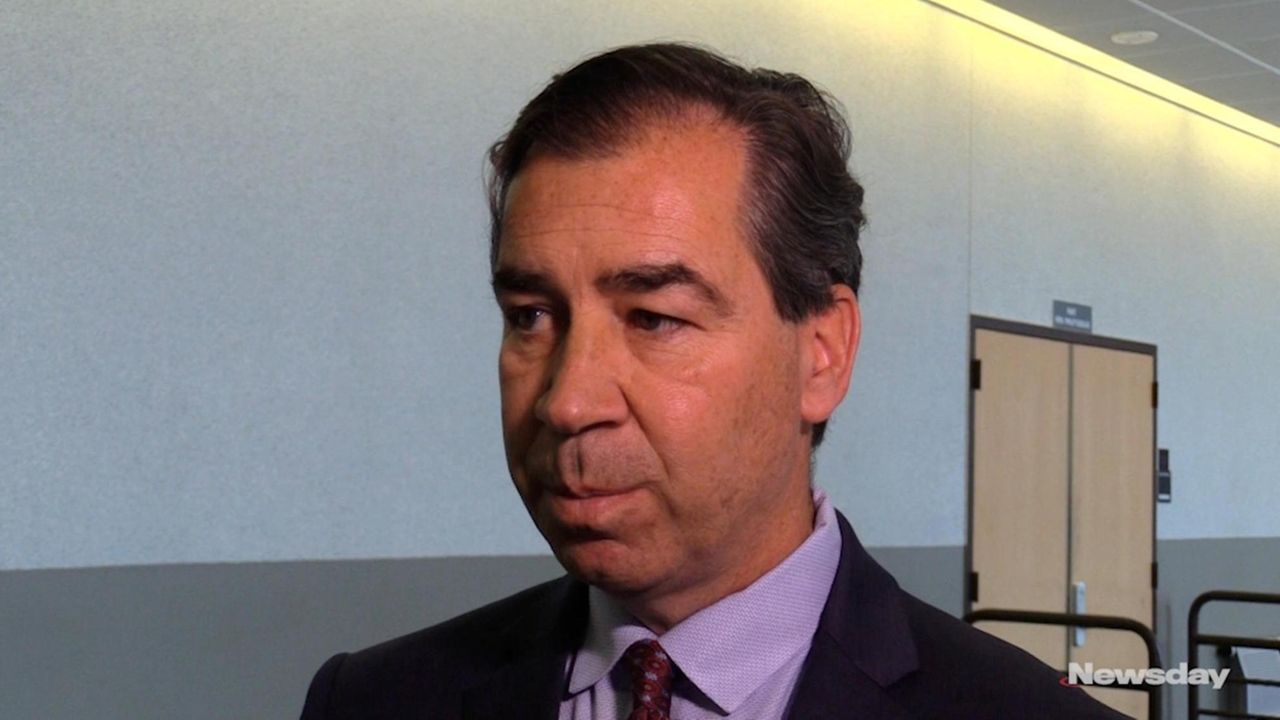 John LoTurco, attorney to Christopher Loeb, explained Thursday why he says his client fled from police. Loeb's beating by Suffolk police in 2012 had led to the chief of department's prison term and the indictment of the former district attorney. Credit: James Carbone

Christopher Loeb, the man whose beating by Suffolk police led to a prison term for the chief of department and the indictment of the former district attorney, fled from officers from Ridge to Islandia, then hid in the woods because he was afraid of what police might do to him, his attorney said Thursday after his client pleaded not guilty to an indictment.

Loeb, 32, was arrested last month after police say he tried to run over officers, deliberately crashed into a police car and drove across lawns to get away. He came into the Riverhead courtroom of Suffolk County Court Judge Stephen Braslow with a walker, a result of  being bitten by a police K-9 dog when he was arrested on March 22.

Assistant District Attorney Sheetal Shetty said the ordeal began in Ridge, where a woman was walking her dog and Loeb nearly ran her over in his Jeep Grand Cherokee. Shetty said the woman grabbed her dog and dived onto a neighbor's lawn to avoid getting hit, and the woman then saw an agitated Loeb get out of his SUV and pace on the grass. The woman called police and described Loeb as "cracked out," Shetty said.

At that point in Shetty's narrative, Loeb became agitated until Braslow and Loeb's attorney, John LoTurco of Huntington, calmed him down.

"You'll be treated fairly by this court, so relax," Braslow said.

Shetty continued, saying police then arrived on the scene. Some of what followed was documented by officers' bodycams and dashcams, she said.

"You can hear Mr. Loeb revving his engine, and a smash," Shetty said. That was because Loeb had driven directly at an officer, who had to dive into his vehicle to avoid  being run over, she said.

Residential surveillance videos showed Loeb driving across lawns to get away from police, Shetty said. Officers called off the chase because it was too dangerous, she said.

Motorists called in to police, she said, describing Loeb driving at more than 100 mph on Patchogue-Mount Sinai Road, sometimes on the wrong side of the road, until he stopped at a gas station in Islandia and ran into the woods. A police helicopter located him crouching under a tree and the police dog retrieved him, Shetty said.

LoTurco said later that using the dog was unnecessary. His client pleaded not guilty to second-degree assault, reckless endangerment, criminal mischief and a dozen other charges.

In Loeb's Jeep, Shetty said, police found three pipes and a bong. One of the pipes had cocaine residue on it, she said. Loeb's blood results from the hospital showed the prescription anti-anxiety drug Xanax, cocaine and bath salts, she said. She asked Braslow to hold Loeb on bail of $100,000 cash or $200,000 bond.

LoTurco said Loeb could post that but wouldn't so that he can again get help for his persistent drug addiction. Loeb has been in and out of drug rehabilitation over the past few years.

LoTurco told Braslow that there "could have been psychological reasons for him to flee, related to prior police conduct that we all know about."

Outside court, LoTurco said he was referring to when then-Chief of Department James Burke beat Loeb in December 2012 after Loeb was found with Burke's stolen duffel bag. Burke also threatened to kill Loeb and rape his mother, Loeb has testified. Burke pleaded guilty in February 2016 to violating Loeb's civil rights after admitting to assaulting Loeb and obstruction of justice for orchestrating a departmental cover-up.

Later, Burke's mentor, former District Attorney Thomas Spota, and his friend, corruption prosecutor Christopher McPartland, were charged with obstruction of justice in the case. They have pleaded not guilty and are scheduled to go on trial in November.

Before Loeb left the courtroom, Braslow urged him to seek substance abuse treatment in the Suffolk County jail.

"It's a good program," Braslow said. "This stuff can't happen anymore. People could have gotten hurt."