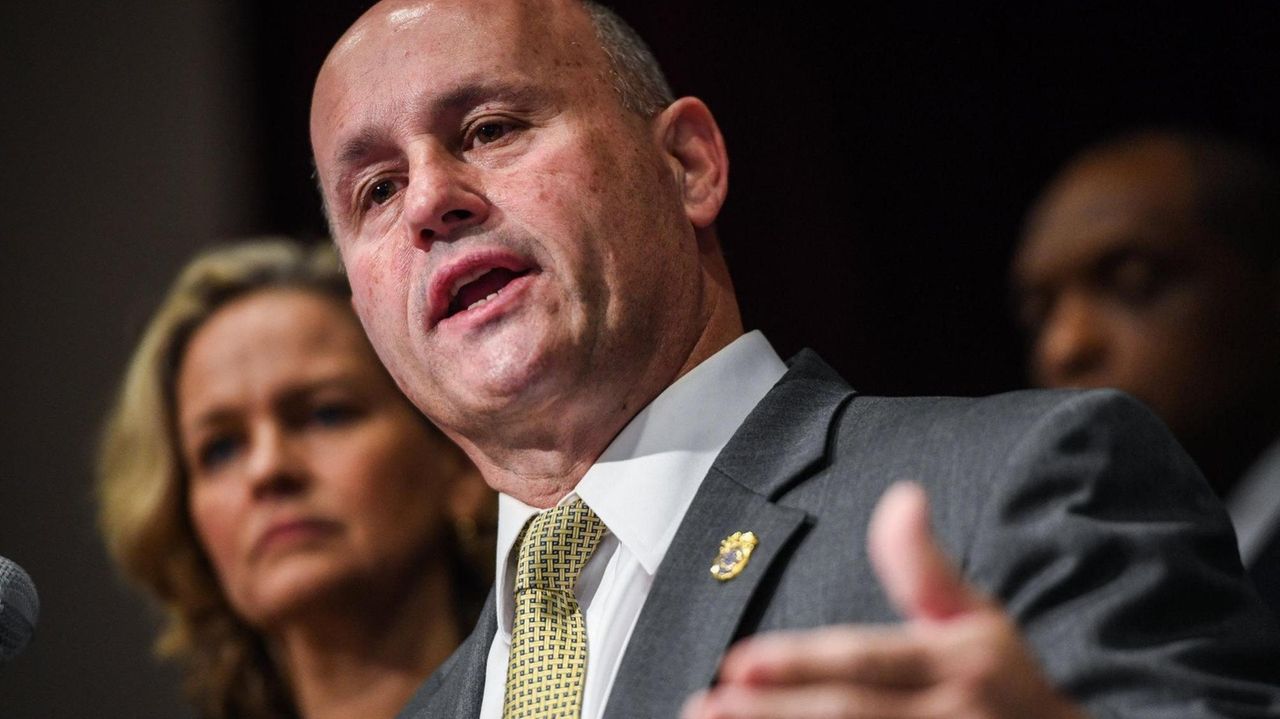 Authorities on Thursday warned Long Islanders — especially seniors — about phone scammers who have stolen money by claiming to be police officers, IRS agents and other government officials. Suffolk police released an audio recording of one such call. Credit: SCPD

When a man claiming to be a Suffolk cop called Rosemarie O’Rourke and said her grandson was in big trouble, she'd been grieving the death of her husband two days earlier — an easy target for a scam artist.

The caller told O’Rourke on June 5 that her grandson had been arrested on drug charges, according to a police report, and she needed to buy $8,000 worth of Best Buy gift cards for bail. O’Rourke purchased the gift cards and provided their personal identification numbers to the man when he called back.

O'Rourke later realized she'd been the victim of a scam by someone who got her name and that of her grandson from her husband’s obituary. O'Rourke said she is embarrassed by her lapse in judgment but is speaking out to prevent other seniors from falling victim to similar scams.

“I hope this helps people,” said O’Rourke, 79, of Huntington. “It was dumb and it was stupid, but when you are vulnerable, you are thinking with your heart and not your head.”

Authorities across Long Island are warning residents — especially seniors — to be wary of con artists who have stolen tens of thousands of dollars from victims like O’Rourke by claiming to be police officers, IRS agents and other government officials.

“People really need to be wary and skeptical about any solicitation they receive over the phone, especially people asking for personal information or financial information,” Suffolk County Executive Steve Bellone said Thursday.

Bellone is expected to discuss the issue at a news conference Friday in Hauppauge with Suffolk Police Commissioner Geraldine Hart, Chief of Department Stuart Cameron and other officials.

The swindlers typically call victims and tell them they need to send money to bail out loved ones from jail or settle an outstanding tax bill or legal issue, according to police in Nassau and Suffolk.

Law enforcement officials say these are especially tough cases to investigate and prosecute because these scam artists are often based in Russia, China and other foreign countries. Even fraudsters based in the United States are tough to track, officials said, because they typically use untraceable phones.

Nassau County Executive Laura Curran and Police Commissioner Patrick Ryder issued their own warnings about the scams Thursday during a news conference in Mineola. Curran applauded Nassau investigators for the Dec. 20 arrest of Frederick Espinal, 23, of the Bronx, on multiple grand larceny charges.

Having friends in high places is no protection for targets. Jocelin Elan, mother of Bellone’s director of communications, Jason Elan, said she has received several of the scam calls. Jocelin Elan said a robocall message left on her voicemail warned she would be placed in custody by “local cops” if she didn’t call back. She reported that call and the others to the FBI.

“It was scary and it was unnerving,” she said.

Authorities said they don't know how many people have been targeted in the scams. These crimes often go unreported because victims are too embarrassed to go to the police, authorities said, but anecdotal evidence suggest the problem is growing.

“It seems like they are becoming more prolific,” Cameron said. “We are seeing a wider range of scams — a family member is kidnapped, or they made a mistake on their taxes, or a utility says they need to pay a bill. Unfortunately, a lot of people who seem to be victimized are elderly. They lose all or part of their life savings and have no chance to recoup it.”

Seniors are especially vulnerable because they are often unaware that personal information can be gleaned from social media and because they grew up in a more trusting era, officials said. Officials in both counties said they are mounting education campaigns through schools, libraries and senior centers to raise awareness.

Cameron said residents who believe they have been targeted by scam artists should contact the police department and verify that the caller works there.

"No official entity is going to ask for payment in gift cards,” he added.

The scam, meanwhile, continues to haunt O’Rourke, who used two credit cards to purchase the gift cards last spring. Chase Bank forgave $4,000 in charges she put on her Visa card, but American Express said she is liable for the $4,000 charge on her card because, according to a spokeswoman, O’Rourke purchased the gift cards and then made the decision to give them to somebody else.

“It is despicable, what these people do are doing to people when they are vulnerable,” O’Rourke said of the scam artists. “I still can’t believe anybody did this. It is so cruel.”