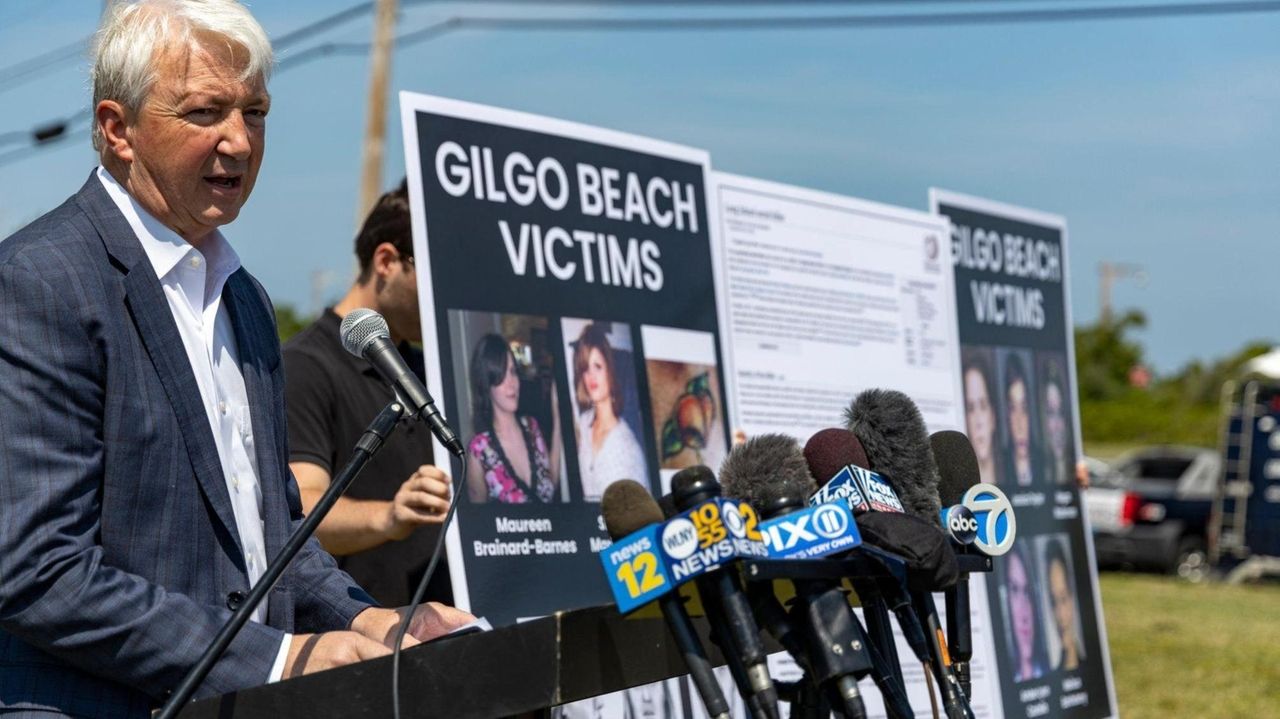 The remains of nearly a dozen people were found years ago and no arrests have been made in the Gilgo Beach investigation. State Sen. Phil Boyle is asking the state attorney general to appoint a special prosecutor to review the early stages of the investigation. Newsday's Cecilia Dowd reports. Credit: Newsday / Reece T. Williams; Howard Schnapp; File Footage

State Sen. Phil Boyle (R-Bay Shore), at a news conference at Oak Beach on Monday morning, said he wrote a letter to James making the request because Suffolk residents deserve answers to the enduring mystery of who dumped 10 bodies, many of whom were sex workers, along Ocean Parkway more than a decade ago.

"There are far too many conflicts and questions that are still in place 10 years later and people want to know — the residents of Suffolk County, the residents of New York and the resident of the United States — they need to know that everything that could be done was done to try to get justice for these victims and their families and to assure the people of Suffolk County that their police department, at the time, did everything that they could to solve this case."

A police search for missing sex worker Shannan Gilbert led to the discovery in December 2010 of the first set of human remains. No arrests have been made in the case, which has been hobbled by law enforcement infighting, although authorities last year used new DNA technology to identify one of the victims who was previously known as Jane Doe #6.

Boyle asked in his letter to James for a probe into the time period covering the election of Suffolk County Executive Steve Bellone, a Democrat, on Nov. 5, 2011, to Dec. 10, 2015 — when the FBI rejoined the local police investigation. Boyle cited the much-criticized decision by former Suffolk Police Chief James Burke, who was appointed by Bellone shortly after taking office, to remove the FBI from the police investigation.

Bellone spokesman Derek Poppe said in a text message, "This remains an ongoing criminal investigation of the highest priority."

Boyle also on Monday said he sent letters to Bellone and acting Suffolk Police Commissioner Stuart Cameron. Boyle asked for the police commissioner to publicly state "what investigative actions were taken to solve the murders … immediately after" Burke was named chief of department in 2012.

In a statement, the police department said the Gilgo Beach killings remain a top priority.

Boyle, who represents the Gilgo and Oak Beach communities, said he was bringing up these issues now because of new information that publicly emerged, including a Newsday report that Burke, former Suffolk District Attorney Thomas Spota and his top aide Christopher McPartland plotted to remove former County Executive Steve Levy from office. Both Spota and McPartland were convicted and are awaiting sentencing on federal corruption charges related to the cover-up of Burke's beating of a handcuffed prisoner in 2012. Burke served 46 months in federal prison for the beating and the ensuing cover-up.

Spota also publicly disagreed with then-Suffolk Police Commissioner Richard Dormer on whether there were one or more suspected Gilgo killers. Boyle also cited a recent podcast on the case.

Seven of the 10 Gilgo Beach victims have been identified, but police have said they are working to identify the others in hopes of solving the killings.

Last May, detectives and the FBI were able to identify sex worker, Valerie Mack — previously known only as Jane Doe No. 6 — through a forensic technique called genetic genealogy.

Last year, Suffolk police released two photos of a belt that was found at one of the scenes and was believed to have been handled by a potential suspect in the killings. The dark leather belt was embossed with the letters "HM" or "WH."