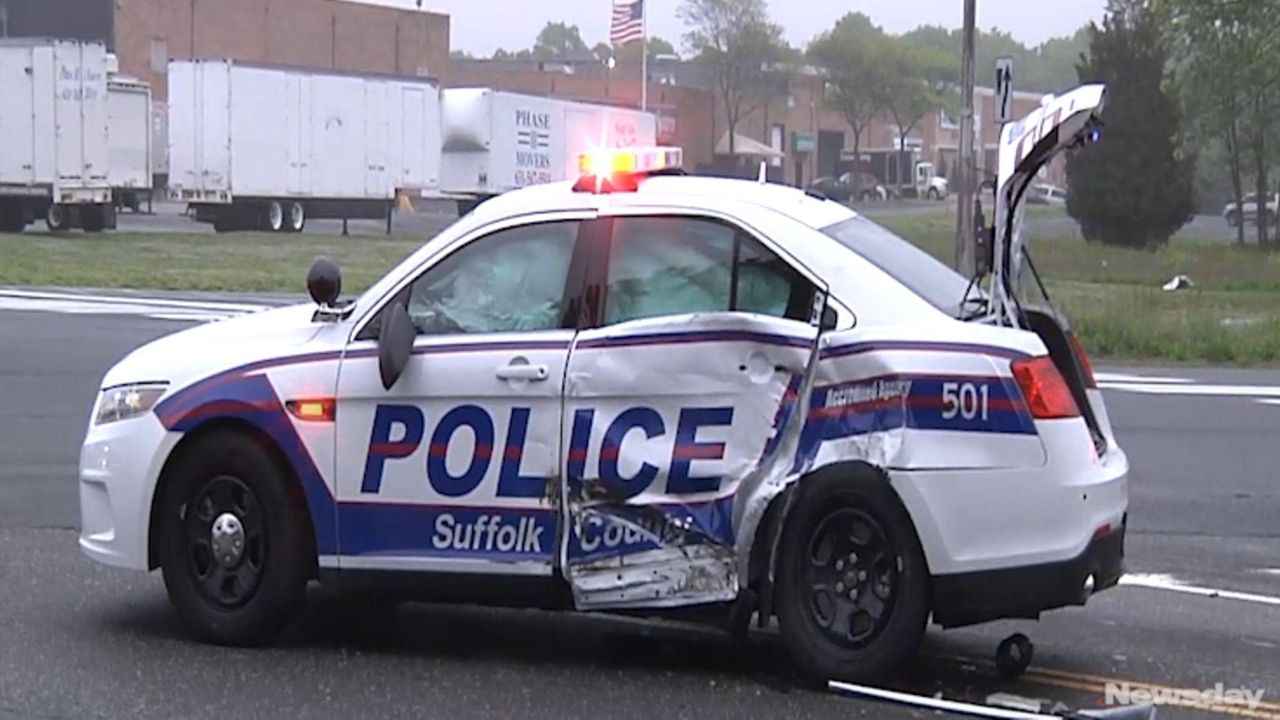 On Thursday, May 25, 2017, a drunken driver hit a patrol car and two other vehicles in Holbrook while speeding away from officers, according to Suffolk police. The driver was arrested shortly after the 5:15 p.m. crash, police said. Officials said that an officer in a Fifth Precinct cruiser and a motorist in one of the other vehicles suffered injuries, but none were considered life-threatening.  Credit: Stringer News Service

A Ronkonkoma man who crashed into a police car and two other vehicles in Holbrook as he was speeding away from officers has been charged with drunken driving and other offenses, Suffolk County police said Friday.

A police officer and the drivers of the other two vehicles were treated at hospitals for non-life-threatening injuries, authorities said.

Richard Carroll, 48, of Shelter Road, faces charges of felony driving while intoxicated, fleeing a police officer, reckless endangerment, felony aggravated unlicensed operation of a vehicle, operating a motor vehicle without an ignition interlock device and leaving the scene of an accident with injuries.

Carroll pleaded not guilty Friday at his arraignment at First District Court in Central Islip, where bail was set at $17,500.

Carroll’s attorney, Steve Politi of Central Islip, said in a telephone interview Friday that prosecutors “have no evidence of intoxication other than statements that they attribute to him.”

“We are very interested in asserting his innocence and fighting the case,” Politi said. “It seems to be overblown.”

According to a news release issued Friday, Fifth Precinct officers saw Carroll at about 5:15 p.m. on Thursday driving a 2006 Ford Explorer “at a high rate of speed” and tried to pull him over on eastbound Veterans Memorial Highway north of Broadway Avenue in Holbrook, but he sped away.

The officers decided not to pursue Carroll, but a short time later the speeding suspect tried to make a right turn onto Broadway Avenue and struck a marked police vehicle that was stopped at a red light on the northbound side of Broadway Avenue, police said.

Police said the impact of the crash pushed the police car into a 2017 Nissan Altima that was stopped at the same light as the officer’s vehicle. Carroll then fled south on Broadway Avenue, where he struck a Ford Taurus and a Mazda 3 near Sunrise Highway. He was arrested on Sunrise Highway and Broadway Avenue after he hit a tree, police said.

According to court records, Carroll pleaded guilty this month to driving while intoxicated in connection with a July 18, 2014, incident in Suffolk County. As part of Carroll’s sentence, his driver’s license was revoked for six months, he was fined $500 and ordered to do community service. Court also records show he was ordered to use an ignition interlock device for 12 months.