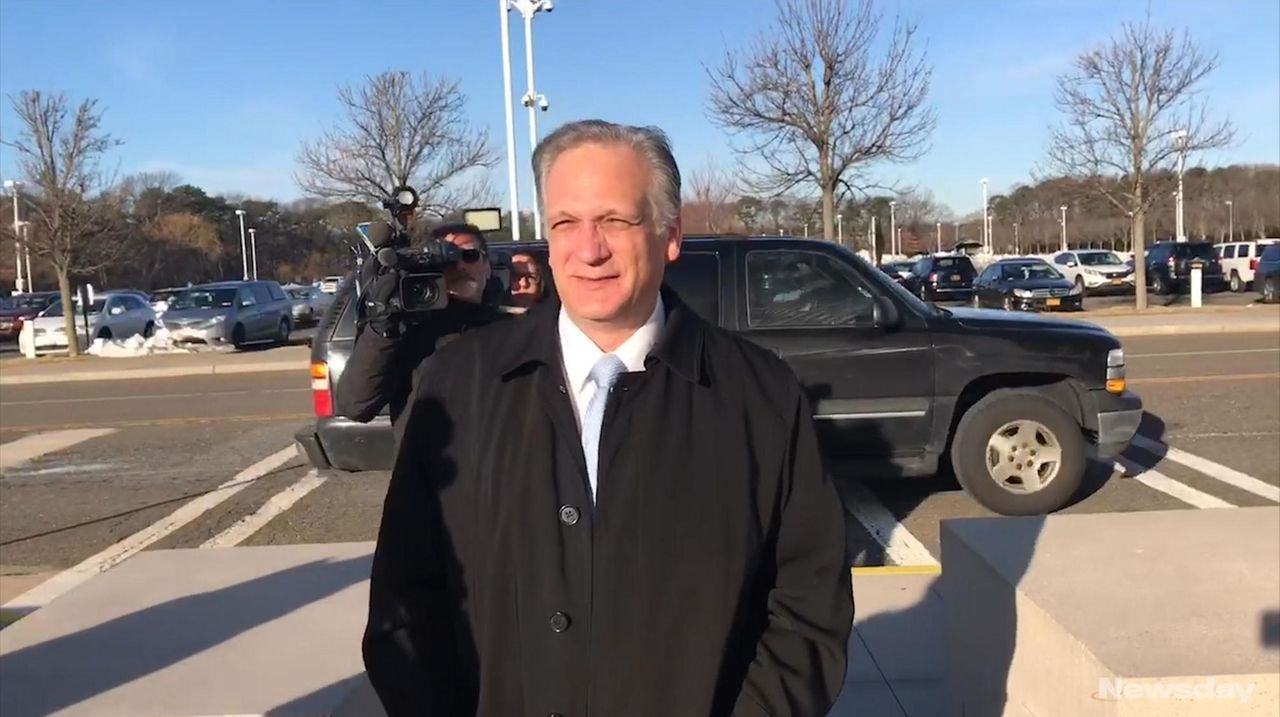 This story was reported by Nicole Fuller, Andrew Smith, Robert E. Kessler and Emily Ngo. It was written by Ngo.

A federal judge seated a jury of six women and six men Monday in the federal corruption trial of former Nassau County Executive Edward Mangano and former Oyster Bay Town Supervisor John Venditto — as Mangano maintained he would be exonerated.

Asked if he has confidence in the outcome, Mangano responded, “I always feel confident.”

Inside the courthouse, U.S. District Judge Joan M. Azrack asked 51 potential jurors — one by one — about their jobs, what they do in their spare time, their favorite television shows and which public figures they admire.

“You are the jury,” she told the panel ultimately selected. “Don’t read or absorb any information about this case in any way — even psychically.”

All have pleaded not guilty.

Former restaurateur Harendra Singh, a 25-year friend of the Manganos, pleaded guilty to bribing Edward Mangano and Venditto, and is cooperating with the government in its case against the officials.

Singh provided Linda Mangano with a $450,000 no-show job at Edward Mangano’s request and footed the bill for the family’s travel to Caribbean vacation spots, among other bribes and kickbacks, Singh and prosecutors allege.

Despite his Monday morning statement to reporters, Mangano appeared nervous before the prospective jurors arrived. He paced in and out of the courtroom.

The courthouse will be closed Tuesday for an impending storm, and opening statements are slated to begin on Wednesday. Singh, the leadoff witness, is expected to take the stand Thursday and be cross-examined next week.

The trial is expected to last six to eight weeks.

The latest in the Mangano case

“This makes me think she should run for president after today,” Azrack quipped after several potential jurors chose Winfrey.

One person responded that President Donald Trump was who he admired most.

Venditto and the politics of LI corruption

Prosecutors declined to comment after the jury was seated.

He added that he believed they had selected an “unbiased, fair jurors.”

The defense attorneys have said their clients are the victims of Singh’s attempt at winning leniency in his own criminal case in exchanging for his cooperation.

Singh also pleaded guilty to attempting to bribe New York City Mayor Bill de Blasio, who has not been charged.

The case against the Manganos and Venditto is the latest to go to trial following federal investigations into influence-peddling by officials.

In Manhattan, former state Assembly Speaker Sheldon Silver had his conviction overturned, and a retrial has been scheduled for April.

Also in Manhattan, a jury Monday said for the second time it was deadlocked in the case of Joseph Percoco, a former senior aide to Gov. Andrew M. Cuomo. Percoco is alleged to have taken $300,000 in bribes.

Sign up for our Mangano trial newsletterGet our insider's look and analysis of the key moments in the re-trial of Ed and Linda Mangano. Power on Trial: Jury is seated in Mangano trial6 men, 6 women seated on juryAnd just like that, a juryAfternoon can be tough ... How crises plagued Mangano's two termsEdward Mangano, the former Nassau County executive, entered office with high ideals but was plagued by crisis after crisis — some unexpected and others self-inflicted. His trial begins Monday in a federal courtroom in Central Islip. Judge: Mangano, Venditto trial on scheduleDespite a late turnover of text messages recovered from the star witness against former Nassau ...