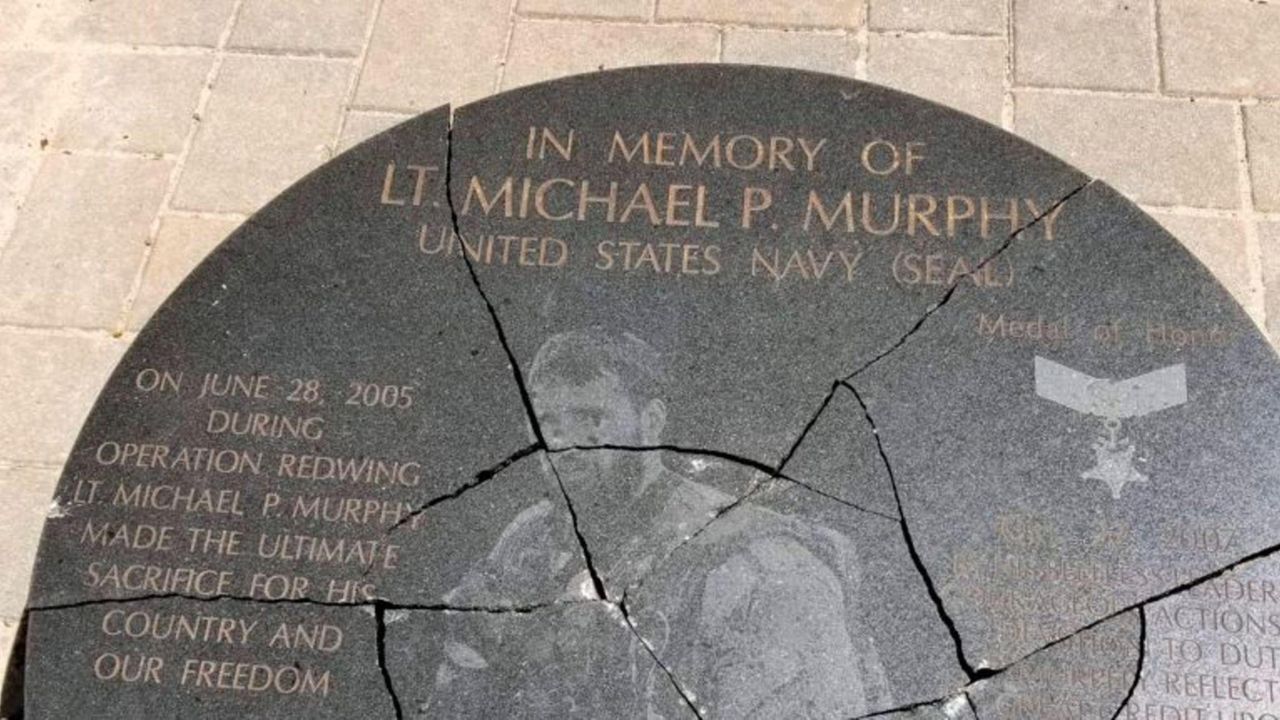 Before he became a Navy SEAL and died defending his country in Afghanistan, Patchogue native Michael Murphy protected swimmers and sunbathers as a lifeguard at Lake Ronkonkoma.

Murphy’s altruism would have led him to counsel the teenager whom Suffolk police charged with vandalizing a memorial overlooking the lake that honors the Medal of Honor recipient, Murphy’s father said Friday.

“Michael was the type of person who would have wanted to take this person under his wing and talk to him,” Daniel Murphy said, hours after police arrested the 14-year-old boy, whom they did not identify, at his Ronkonkoma home.

The granite slab commemorating Michael Murphy — who was killed in 2005 while leading a four-man SEAL team on a covert mission in the Hindu Kush mountains near Pakistan — was shattered Thursday in an incident that left the community dismayed and captured the attention of Gov. Andrew M. Cuomo.

The memorial, in a Brookhaven Town park on Lake Ronkonkoma’s south shore, included an engraved picture of Murphy and a description of the clandestine June 28, 2005, operation in which he was killed.

Within hours of the vandalism being discovered, offers of rewards leading to an arrest were made by Suffolk Crime Stoppers and Brookhaven officials. Cuomo, saying he was “appalled and disgusted” by the memorial’s destruction, said the state would “fully fund” its replacement.

“This most-esteemed award memorializes and honors his leadership and service, and to desecrate this honor is beyond the pale,” Cuomo said in a statement Friday.

Fourth Squad detectives arrested the teen at 3 a.m. Friday at his home after an investigation, Suffolk County police said in a news release. The boy will be arraigned in family court on a charge of second-degree criminal mischief at a later date, police said.

Det. Lt. Michael Crowley, commanding officer of the Fourth Squad detectives, said police quickly responded to the incident and located “a source who gave us information that led us to the suspect.”

He said the teen had one previous encounter with police but had not been charged in that incident.

It is not likely reward money will be awarded because police cracked the case themselves, Crowley said.

At a news conference at the memorial Friday morning, Murphy’s parents led calls to use the crime as a reminder of the sacrifices made by their son and other veterans and service members.

Daniel Murphy, of Wading River, noting he had received messages of support from people throughout the country and as far away as Germany and England, said the family was less interested in seeing the suspect punished than in hoping the teen would come to understand the importance of the memorial.

Michael Murphy’s mother, Maureen Murphy of Patchogue, said young people should learn to be “grateful” for people like her son.

“I lost him again because I used to come here and see him,” she said. “I hope they educate this young man and tell him how foolish he was.”

The news conference also was attended by more than a dozen local officials and police, who were surrounded at a podium by dozens of Lake Ronkonkoma civic leaders and residents.

“Hopefully this will be a teachable moment for the young people involved — for them and for everyone in Suffolk County,” County Executive Steve Bellone said in an interview.

Rep. Lee Zeldin (R-Shirley) said Murphy was a “symbol of America” who lost his life soon after the suspect was born.

“This 14-year-old didn’t know when it was happening that Lt. Michael Murphy was sacrificing his life for this juvenile and his family,” Zeldin said.

The damaged plaque had been removed Friday morning and plans were underway to replace it with stronger material, Daniel Murphy said.

Brookhaven Supervisor Edward P. Romaine said security at the park would be upgraded by the end of the month with surveillance cameras, lighting and stepped-up patrols.

Romaine added that town officials had received numerous offers of donations from town residents and organizations to repair the memorial.

She said the vandalism was disturbing because residents had worked hard to improve the area surrounding the lake.

“For them to turn around to do this damage was devastating,” she said.

Daniel Murphy said the site of the memorial was significant to his family because his son had swum across Lake Ronkonkoma — in both directions — as part of his training regimen as he prepared to join the Navy.

Before it was removed, the stone memorial had cracks emanating from its center, where a picture showed Michael Murphy in his military gear, his father said.

“He destroyed, for us, a part of our son,” Daniel Murphy said. “One of the places where he struck Michael was right in the heart.”