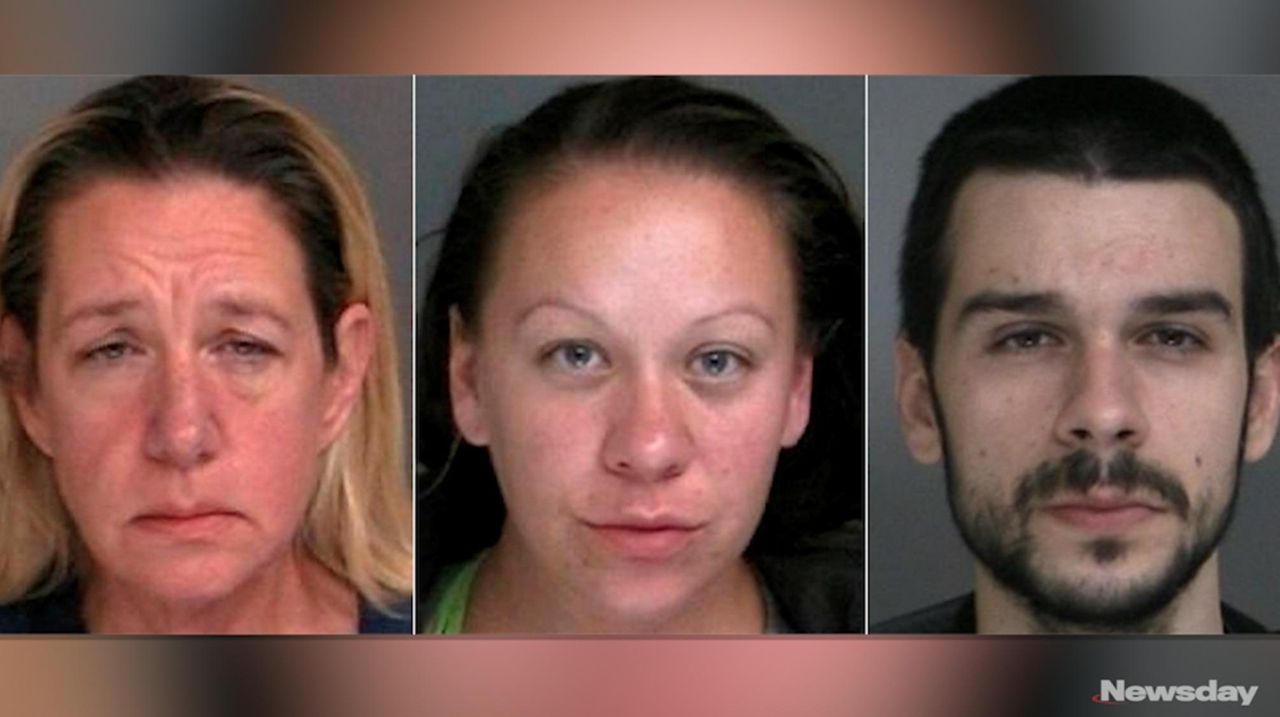 A Mastic Beach woman and her two adult children -- all described by authorities as crack-cocaine users and possibly spurred by drug use -- are charged in seven knifepoint robberies that occurred at Suffolk businesses over the past month, police said Sunday, Oct. 22, 2017. Credit: James Carbone, Stringer News Service

A Mastic Beach woman and her two adult children have been charged in seven knifepoint robberies at Suffolk businesses during the past month, police said Sunday.

Deborah Salvatore, 55, her daughter, Lauren Mascia, 31, both of McKinley Drive, and her son, Rick Mascia, 25, of Norfleet Lane in Medford, were arraigned Sunday in First District Court in Central Islip and remained in custody, police said.

“They committed robberies together and now they’ll go to jail together,” Suffolk County Police Commissioner Timothy Sini said during a news conference outside the First Precinct in West Babylon Sunday. “I’m glad we were able to catch them before anyone got hurt.” Authorities have not identified a motive for the robberies.

“It does appear that these three are all drug addicts,” Sini said. “It appears that they are addicted to crack cocaine.”

At Salvatore’s arraignment, her attorney, Bohemia-based Harry Tilis told the judge she had only agreed to give her son a ride to Dunkin’ Donuts.

“This is an anguished mother concerned about her son’s drug addiction and abuse, and her statement [to police] even says, ‘I’m concerned about my son’s drug use,’ ” Tilis said after court. “There’s no evidence she really knew what was going on, and the police admit in the other six robberies, the female robber fled on foot.”

The arrests capped a monthlong crime spree that began Sept. 23 with the holdup of a Family Dollar store on Horseblock Road in Farmingville, police said, and ended with the Saturday night robbery of a Dunkin’ Donuts in Coram.

Police took the three into custody after Rick Mascia robbed the store on Middle Country Road at knifepoint while his mother waited in a car nearby, authorities said. Mascia entered the store, displayed the knife and demanded money. An employee opened the register and then ran toward the rear of the store. Mascia grabbed cash from the register and fled, police said.

Major Case Unit detectives arrested mother and son at the scene, police said, and the ensuing investigation led to the arrest of Lauren Mascia.

Police released surveillance images Wednesday showing a woman suspected in six of the robberies. Suffolk police said Sunday that the woman in the surveillance images was Lauren Mascia. In each instance before Saturday, Rick Mascia waited outside in a car, Sini said.

“Lauren was responsible for all of those [robberies] except for last night, and she was the primary perpetrator,” Sini said. “She would go around and purchase an item or purport to purchase an item, and when at the cashier she would brandish a pocket-size knife and demand cash, and her brother Rick served as the getaway driver in those robberies.”

Sini said Lauren Mascia was not present at the Saturday holdup, in which police say Rick Mascia performed the robbery and Salvatore was to drive the getaway car.

Deborah Salvatore was charged with one count of first-degree robbery in the Saturday robbery in Coram.

They said Deborah Salvatore, Lauren Mascia and her daughter lived together in Mastic Beach, while Rick Mascia visited often.

“Lauren was nice, this is shocking to me,” said Christina Borgese, 43, who lives across the street. “I can’t say anything bad about them at all.”

The family’s home was empty on Sunday afternoon but the front yard was full of Halloween decorations, as well as children’s toys and bicycles. The front walk was covered in chalk drawings.

Gary Fritz, 50, who lives next door, said Rick Mascia often helped his niece ride her bicycle up and down the street when he visited.

“They’re a great family,” he said. “I guess you never know. I would never have expected that.”

According to court documents, Rick Mascia has a lengthy criminal record and pleaded guilty to felony attempted burglary for a 2014 offense. He was sentenced to 10 months in prison, court records show.

The woman who held up a Carvel in Farmingville on Oct. 13 and again the next night — among the robberies that police suspect was committed by Lauren Mascia — wore face paint both times, said Deborah Davidson, the operations manager at the store.

Davidson said the first night the suspect’s face was painted black and white, and she had white streaks the second night.

1:19
Students organize rally against anti-Asian crimes
NY now one of 18 states with half of adults fully vaccinated against COVID-19
Pride parade organizers ban cops from marching in uniform
1:25
Doctors disagree on whether Cuomo's decision to lift restrictions is wise
Rep. Zeldin: I won't call Biden election 'illegitimate'
2:22
Long Island towns and cities getting into the weeds on NY marijuana law
Didn’t find what you were looking for?