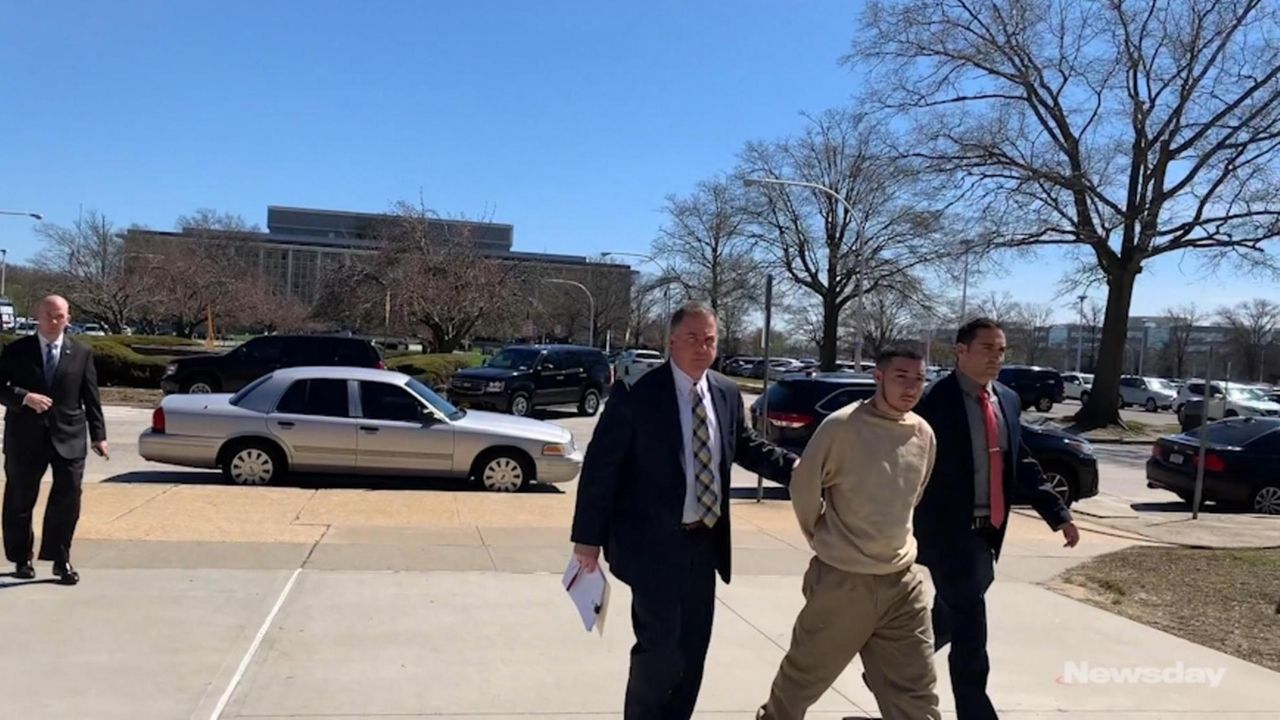 On Wednesday, Nassau District Attorney Madeline Singas spoke at a news conference about a sixth alleged MS-13 member pleading not guilty to a December slaying behind a Nassau community center. Prosecutors described that crime and a Queens killing as an effort by a group of young criminals to start a new local faction of the transnational street gang. Credit: Howard Schnapp

A sixth alleged MS-13 member pleaded not guilty Wednesday to a murder charge in a December slaying behind a Nassau community center, with prosecutors calling that crime and a Queens killing part of an effort to start a new local faction of the street gang.

A 13-year-old girl acted as a lure before the killings, drawing a 23-year-old male acquaintance and a 17-year-old to separate locations last December after contact through social media and text messages, Nassau District Attorney Madeline Singas said Wednesday.

But other alleged gang members were hiding with weapons in the scouted locations and used the same .22-caliber revolver — along with a machete in one of the cases — to execute the victims within less than three days of each other, according to Singas.

Speaking at a news conference, the district attorney said the alleged MS-13 members also carried out the killings as a way to gain rank in their criminal organization while working to establish a new branch of the gang's Normandy clique in the Five Towns and Far Rockaway areas.

The suspects targeted victims Ian Cruz, 23, and Harold Sermeno, 17, because of what they perceived as their slights against MS-13, according to Singas.

"The sheer brutality of these murders over nonsensical, perceived slights to the gang are truly unconscionable. The young ages of these victims and the defendants is heartbreaking. But we are making great progress in our fight against MS-13," the district attorney added, standing with police and prosecutors from Nassau and Queens.

The news conference followed the Nassau County Court appearance of Elmer Gutierrez, 19, of Valley Stream, for an arraignment in which he denied involvement in Sermeno's Dec. 18 slaying.

Police found the Far Rockaway teenager's body behind Five Towns Community Center, on the border of Lawrence and Inwood, after a shooting and machete attack that prosecutors say also involved five other alleged MS-13 members.

Those suspects, including the 13-year-old girl and two 16-year-old boys, also denied a role in Sermeno's killing during previous Nassau arraignments.

The half-dozen suspects are named in a Nassau County indictment from April 4. While five already had faced charges in Queens, authorities will prosecute those accused in connection with both killings on Long Island, law enforcement officials confirmed Wednesday.

The law allows authorities to prosecute defendants in either county if the alleged crimes happened within 500 yards of the border.

"We decided that what was best to obtain justice in this case … was that this case proceed as one case," said Queens Chief Assistant District Attorney John Ryan.

In Cruz's killing, the 13-year-old set up for the two to meet in the park near Kennedy Airport to supposedly share drugs and have sex, Singas said.

But the startup gang faction's reputed leader, Yonathan Sanchez, 22, emerged from the bushes and shot Cruz in the head, according to prosecutors.

In Sermeno's homicide, authorities alleged the 13-year-old and the victim smoked marijuana and drank alcohol before the gang killed him.

Sanchez shot Sermeno with the same weapon from Cruz's slaying, before Gutierrez cut Sermeno's neck with a machete, according to authorities.

Gutierrez previously faced only a weapon charge in Queens. But along with a murder charge in the Nassau indictment, he now faces accusations that he conspired to murder Sermeno and Cruz and new weapons offenses, prosecutor Stefanie Palma said in court.

A Queens complaint had alleged Gutierrez, along with Sanchez, and Carlos Guerra, 18, had a .22-caliber revolver and ammunition for the gun in the room they shared in Far Rockaway.

That was the weapon used in both slayings, according to Singas. She said authorities also seized two machetes, eight knives and 13 cellphones in the same room — rented to serve as a gang hub.

Sanchez and Guerra pleaded not guilty last week to murder charges in both slayings, along with weapon and conspiracy charges.

Teens deny role in suspected Nassau gang slayingThree teenagers have denied taking part in the alleged MS-13 gang slaying of a 17-year-old ... Crime in Nassau and Suffolk, 2006-2017 There were 35,503 violent or property crimes recorded on Long Island in 2017 by the state's Division of Criminal Justice Statistics, a 5.7 percent decrease from 2016. 5 ways to send story tips to Newsday Do you have information that might lead Newsday to an important story, or an investigation? A document that starts us on the trail? Here are five ways for you to send our journalists tips, documents and data with a range of security options.