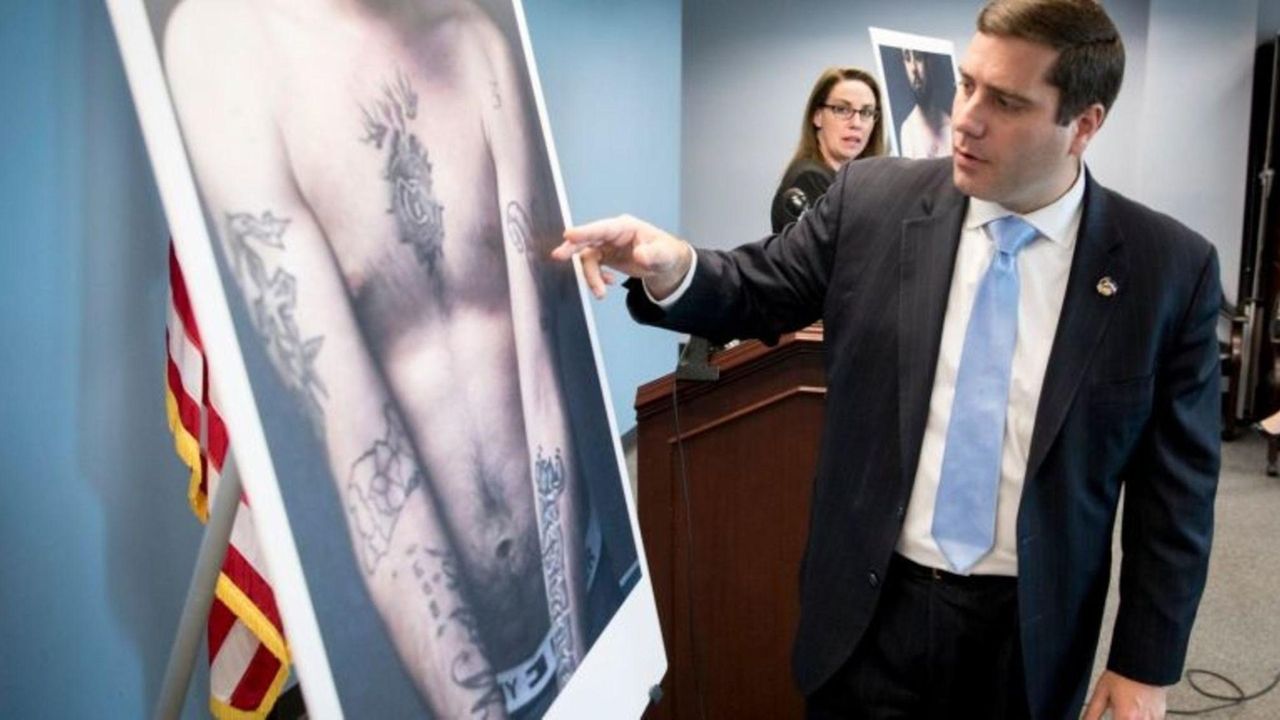 An "enforcer" in the MS-13 gang last year tried to recruit new members by threatening to kill those who refused to join, days after the bodies of four victims were discovered in Central Islip, authorities said Monday as they announced a conviction. Juan Lopez, of Huntington Station, was found guilty Monday of first-degree attempted coercion, a crime that carries a prison sentence of 1-1⁄3 to 4 years, the Suffolk district attorney's office said. Credit: Stringer News Service

An “enforcer” in the MS-13 gang last year tried to recruit new members by threatening to kill those who refused, days after the bodies of four gang victims were discovered in Central Islip, authorities said Monday in announcing a conviction.

Juan Lopez, 32, of Huntington Station, was found guilty Monday of first-degree attempted coercion by a jury in Central Islip, a crime that carries a prison sentence of 1 1⁄3 to 4 years, the Suffolk District Attorney’s office said.

Lopez and a few fellow gang members had confronted at least two boys at Manor Field Park in Huntington Station about 1 p.m. on April 16, prosecutors said.

“They told them that they must join, they must attend meetings, and when the boys resisted, this defendant, Juan Lopez, stated to them in unequivocal terms, ‘That’s how you end up dead in the park,’ ” District Attorney Timothy Sini said at a news conference. “Well my message to Mr. Lopez is that’s how you end up in jail in Suffolk County.”

The park deaths were a reference to the four young men bludgeoned and hacked to death on April 11, their bodies found the next night in a park on Clayton Street. At least nine of the dozen or so alleged killers from MS-13 in the park deaths have been charged. Sini’s office said Lopez was not involved in those slayings.

The attempted coercion arrest reflects the use of a wider array of charges to bring gang members to justice, he said.

“We are going to bring the fight aginst MS-13 to a whole new level,” Sini said, “and that includes utilizing our penal law in innovative ways.”

Sini displayed poster-sized photos of a shirtless Lopez and his MS-13 tattoos - the numeral 1 on one shoulder and 3 on the other. Turning the photo around, he pointed to a skull whose horns resemble an “M” when seen upside down.

He said those tattoos, along with witness testimony, helped convict Lopez. “This is very typical of an MS-13 gang member,” the county’s top prosecutor said.

Sini declined to say much about Lopez’s accomplices, only that they were not being sought.