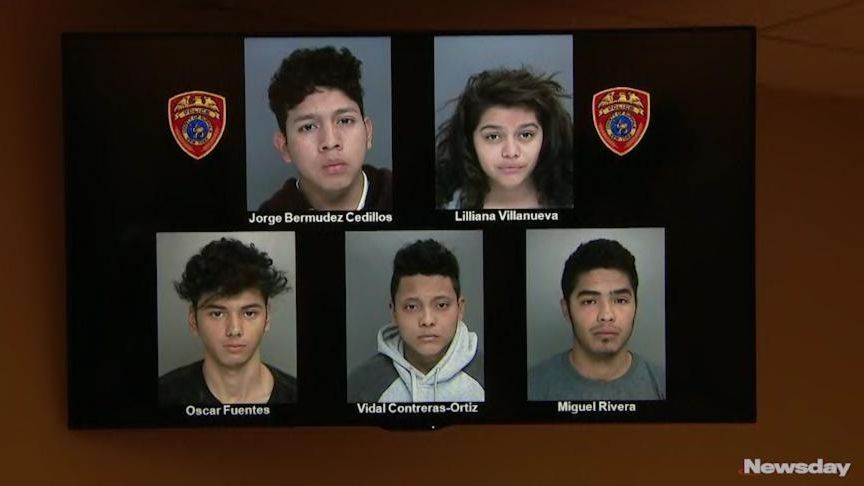 On Thursday, Dec.7, 2017, Suffolk County Police Commissioner Timothy Sini announced that another MS-13 plot had been stopped by Suffolk County police in Brentwood. The five suspects, four of whom are Brentwood High School students, are being charged with second-degree conspiracy after they attempted to abduct a 16-year-old boy, which was witnessed by undercover Suffolk police detectives.  Credit: News 12 Long Island

A group of MS-13 gang members and associates was arrested at gunpoint by Suffolk County police as they tried to abduct a 16-year-old boy they believed belonged to a rival gang so they could kill him, authorities said Thursday.

The five suspects — three of whom were identified by police as members of the gang and the other two as associates — were charged with second-degree conspiracy after the abduction attempt that was thwarted by undercover Suffolk police detectives near Brentwood High School Wednesday afternoon, police said.

Four of the five suspects are students at Brentwood High School, police said.

“Those five individuals were attempting — intending — to abduct that boy and kill him,” said Suffolk Police Commissioner Timothy Sini at a news conference at police headquarters in Yaphank Thursday. “We do believe they were looking to elevate their status in the MS-13 gang by carrying out that murder.”

Sini declined to detail what evidence investigators have that the suspects were planning to kill the victim — also a Brentwood High School student — but a felony complaint filed in court Thursday quote the suspects telling police that they either knew or thought that the victim would have been beaten or killed if he got in their van.

Rivera told police, according to court papers, that the victim was a member of the 18th Street gang — a fierce rival of MS-13.

“We were going to take him somewhere private and beat him to death with the bats,” said Rivera, who according to the court documents identified himself as a member of MS-13’s “Carleton click.”

Suffolk police declined to comment on whether the victim is a gang member.

At about 2 p.m. Wednesday, two plainclothes detectives from Criminal Intelligence saw a van with five people inside approach a 16-year-old boy and were “attempting to coerce” the young man in the van, Sini said.

The detectives intervened after “they realized immediately that these individuals matched the description of the previous incidents.”

“It’s those detectives that foiled the plot to kill a 16-year-old boy,” Sini said. “They held those individuals at the scene at gunpoint, while waiting for a response from patrol.”

Sini also declined to specify which suspects are purported members or associates of MS-13 — the brutal street gang with roots in Los Angeles and El Salvador that police said has claimed at least 25 lives on Long Island since 2016 and has prompted visits from both President Donald Trump and U.S. Attorney General Jeff Sessions.

Second-degree conspiracy is a Class B felony and is charged under New York state penal law when a defendant is accused of planning with at least one other person to commit an A felony, in this case, murder, Sini said.

A conviction on the conspiracy charge is punishable by up to 25 years in prison and five years of probation.

Most attorneys for the five defendants could not be reached for comment Thursday, but Peter Mayer IV of Hauppauge, who was assigned to represent Fuentes, said his client has no prior criminal record.

Fuentes told police, according to court documents, that Contrera-Ortiz told the group they were “going to kill the guy.” Fuentes countered, the document said, that he had stated, “You can’t without permission. You need to call somebody.”

Mayer said: “He could have just been in the area. . . . This is Brentwood where everyone thinks that you’re a gang member if you’re from El Salvador.”

LaToya James, a Hauppague attorney assigned to represent Contrera-Ortiz, said by text message that her client maintains his innocence, lives with his family in Brentwood and has no prior criminal record.

According to court papers Contrera-Ortiz told cops that “he knew if the victim got into the van that they would hurt or kill the victim.”

James said she had not received “copies of any statements made by him, or statements which implicate him.”

The day before the attempted abduction, police were on high alert after they received community complaints on Tuesday about a group of “three to four Hispanic males in a van approaching young Hispanic boys and harassing them” between 7 and 9 a.m., Sini said.

There were three incidents on Tuesday, in which two of the boys were assaulted with a bat — one hit in his arm and the other hit in his leg — but did not suffer serious injuries, Sini said. All three victims were 16-year-old boys and students at the high school, and Sini said police believe the group was trying to abduct them.

Bermudez Cedillos, according to the court documents, said they would have used whatever they had in the van to kill the victim.

Villaneueva told police that she heard Bermudez-Cedillos “say the victim was 18. She thought they would beat him because he was 18 and they are MS-13,” the court papers said, an apparent reference to the 18th Street gang mentioned in other court documents.

The recent MS-13 scourge of violence rocketed to the public conscience in September 2016, when the bodies of two teenage girls who were students at Brentwood High School — Kayla Cuevas and Nisa Mickens — were found brutally beaten and stabbed in Brentwood.

All were victims of MS-13, authorities have said.

Most recently, the remains of three young men who authorities and sources have said were victims of MS-13 were found in Nassau County.

The body of Angel Soler, 16, of Roosevelt, was found Oct. 19 in woods in the Roosevelt-Baldwin area.

The remains of Kerin Pineda, 20, of Freeport, were found in the thick woods near the Freeport/Merrick reservoir on Oct. 27. The remains of Javier Castillo, 16, of Central Islip, were found Oct. 23 in Cow Meadow Park and Preserve in Freeport. No arrests have been made in their deaths.

Gang violence on Long IslandSince its creation in 2003, the federal Long Island Gang Task Force has prosecuted more ... MS-13 on LI: What we knowWith hundreds of the gang members estimated to be on Long Island, here's what we know about how they operate and what's being done about it. 5 ways to send story tips to Newsday Do you have information that might lead Newsday to an important story, or an investigation? A document that starts us on the trail? Here are five ways for you to send our journalists tips, documents and data with a range of security options.