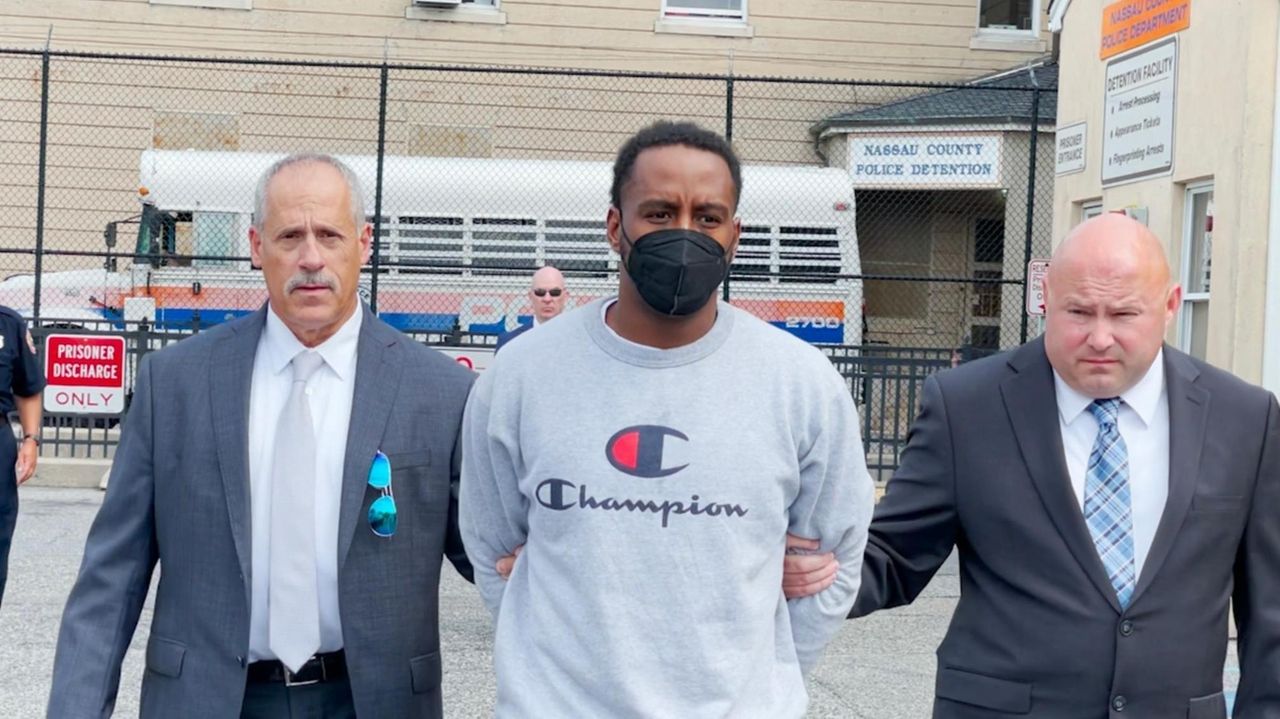 On Wednesday, Michael Wright was arraigned on charges in connection with a shooting at a Fourth of July block party that left one dead and two wounded in Roosevelt. Credit: Howard Schnapp

A 34-year-old man charged with murder was on parole on the Fourth of July when he fired on men, women and children gathered for a Roosevelt block party, leaving one dead and two wounded, Nassau police said Wednesday.

The alleged shooter, Michael Wright, of Roosevelt, is charged with second-degree murder, two counts of second-degree attempted murder and second-degree criminal possession of a weapon. He was remanded after entering a plea of not guilty at his arraignment Wednesday in First District Court in Hempstead.

The shooting killed 27-year-old Tavon Greenhill of Hempstead, and wounded a 21-year-old man, also from Hempstead, as well as a 31-year-old Uniondale woman, police said. Greenhill was pronounced dead at the scene. The other two victims, whose identities have not been released, are recovering, Nassau police Homicide Squad commander Det. Lt. Stephen Fitzpatrick said Wednesday.

Fitzpatrick said a total of 10 shots were fired just before 7:30 p.m. July Fourth during "an altercation" between two groups of males at the Hudson Avenue block party, with Wright firing six times and another shooter firing four times.

He said the investigation is continuing.

The party was attended by between 75 and 100 people, including children, Fitzpatrick said, noting that the street was filled with vendors, children's "bouncy houses," a DJ, and other attractions when gunfire erupted.

"Two factions of males got into an altercation," he said. "That altercation became heated. Two males, one from each side, produced handguns and started shooting at each other despite the fact the crowded street had children and other people."

Fitzpatrick described Wright as a Bloods gang member who had two prior convictions for possession of a loaded weapon. He'd been on parole since August 2019, Fitzpatrick said. Gang affiliation appears not to have been a factor in the shooting, the commander said. Investigators believe the altercation leading to the gunfire seems to have stemmed from "an incident in the street, or money," two weeks earlier, Fitzpatrick said.

Wright is not guilty, said his Rockville Centre attorney, Michael DerGarabedian, on Wednesday.

Of his client's alleged gang affiliation DerGarabedian said: "That's nonsense. That's the District Attorney and the police trying to use the media against him."

DerGarabedian said that "based on the initial investigation, it appears that an acquaintance of my client has accused him of doing it. That's the way the finger is pointing, right now."

Wright is next scheduled to be back in court Friday.