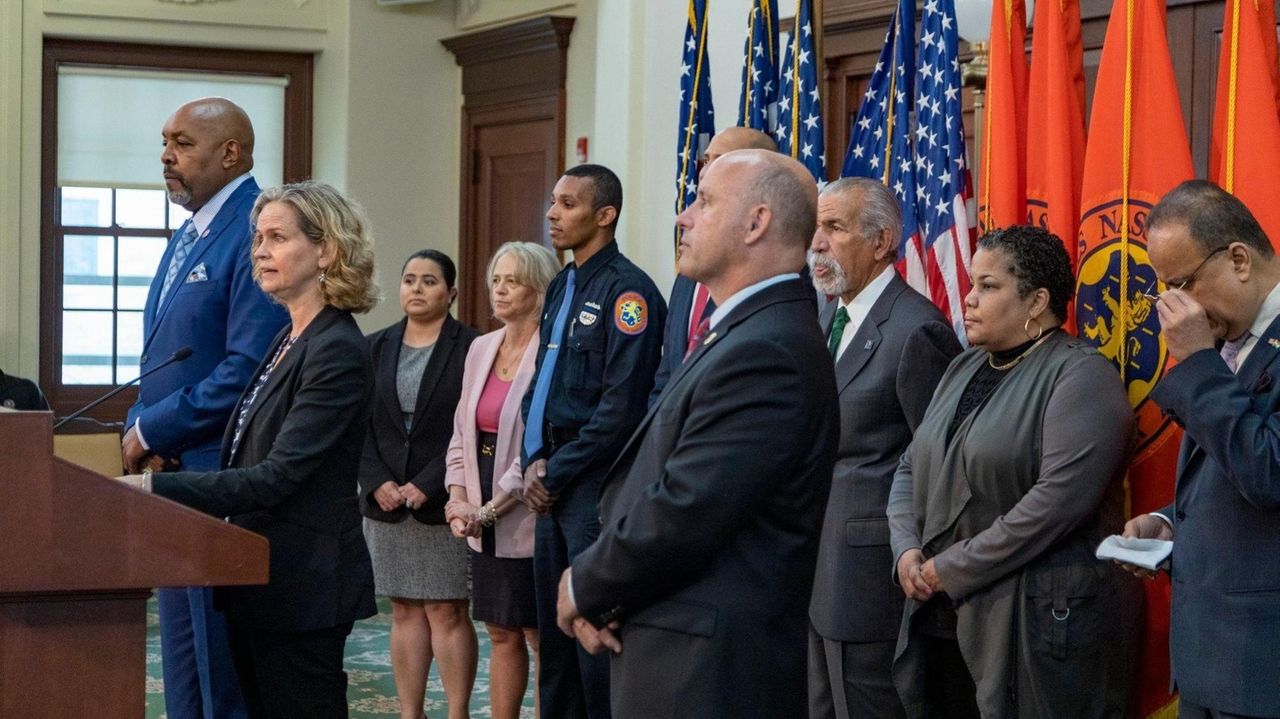 The committee’s mandate is to help the county improve diversity in police hiring through recruitment, testing, and hiring.

The county executive is seeking recommendations from the committee ahead of the next police officer civil service exam, expected to be scheduled in 2022.

The committee also includes civic and civil rights leaders from across Nassau, including at least one official who criticized Nassau Police Commissioner Patrick Ryder for remarks he made to Newsday about racial minorities coming from "broken homes." Ryder, who attended Curran's announcement but was silent, connected that stereotype to the county's failure to hire more Black and Hispanic police officers.

"We want to get real recommendations on how we can move forward, how we can finally move forward," said Curran, who spoke at a Mineola news conference Thursday attended by a majority of the new committee members. "I think this is a group of people who aren't afraid to take on something challenging, something difficult."

The county executive said the committee will consider changes to the Civil Service process, which guides police department hiring, as well as increasing recruitment efforts, and seeking release from U.S. Justice Department oversight. Curran said she hoped to have the committee's recommendations before the next police exam is administered, which she expects to take place in 2022.

Curran also referenced the county's state-mandated police reform plan, which was finalized in March and included 16 recommendations specific to diversifying the police department, including a mentoring program through the department's fraternal organizations and extra credit for foreign language proficiency. Some of the recommendations were implemented.

"There’s some very good people on that committee, but by making it top heavy with county loyals, that being county political loyals and county employees, is a problem," said Brewington. "We just went through an entire executive order process where the county thumbed its nose at the community that knew that hiring was a problem. The county knew these numbers existed. This is no revelation. They just got outed."

Following a yearlong investigation, Newsday reported that just 36 Black police officers were hired from a pool of 2,508 Black applicants, who had taken the 2012 police test. Of 3,389 Hispanic applicants from the same test, 89 were hired.

Black and Hispanic candidates were eliminated from contention during the hiring process, which includes a physical fitness test and a background investigation, at higher rates than their white counterparts despite decades of federal monitoring by the Justice Department.

Harvey, the newly announced chairman, said Thursday he was ready to "take a good, hard look" at Nassau's police hiring process. Harvey said while watching a Facebook live feed of a police response to an incident in Westbury last week, one commenter said: "All of these police officers are here but none of them are people of color."

"I think that he's doing some soul searching and he's looking at it," Harvey said, adding: "But sometimes your words can overshadow the work and put a negative connotation on all the hard work that you've done. I think as a result of those words, they did hurt a lot of people. And I think he knows that. And I think he realizes it now. Right? And I think that he’ll be better for it."

George Siberón, a member of the new diversity committee and executive director of Hempstead Hispanic Civic Association, said the body will look at the way each step in the process impacts police candidates of color.

"When Newsday wrote the article, you saw the statistics and these statistics were an indictment of the system, really, if you think about it," said Siberón. "The question becomes what do you do about it? This is the beginning of answering that."

"We now know there are impediments in place to disqualify certain people and we need to begin to look at those impediments and fix them," Siberón said.

"He did what you need to do, which was to apologize, and I believe that all of us sometimes misspeak and say insensitive stuff," Siberón said. "But, you know, he's not going anywhere."

Ryder's comments were rebuked by several Long Island civil rights leaders and at least three called for him to resign. But Curran, who said she disagreed with Ryder's sentiments, said those calls were unfair and Ryder would remain in his job. Ryder apologized.

Theresa Sanders, president and CEO of Urban League of Long Island, one of the newly announced members of the diversity committee, told Newsday previously that Ryder's comments indicated a lack of understanding of communities different than his own, although she stopped short of saying Ryder should resign.

In addition to the previously mentioned committee members, the others are: Leslie Davis, president of the Westbury NAACP; Toufique Harun of Muslims for Progress; Jay Singh, a member of the Nassau County Asian American Affairs Council; Gabriela Castillo of the Nassau County Office of Legislative Affairs; and Nassau Police Officer Shajarah Williams of the department's office of Community Affairs.

6,539 Black people tried to become police officers on LI. Only 67 were hired.Minority applicants weren't hired nearly as often as white ones in the past decade, and experts see "clear evidence that it is not the people, it is the process" causing the disparity. Curran creates panel on police hiring; Suffolk evaluating its processResponding to the findings of a Newsday investigation, Curran said its goal is increasing minority representation on Nassau's overwhelmingly white force. Suffolk's police department is evaluating each step of its hiring process, its acting commissioner says. Ryder apologizes as more condemn his comments to Newsday on hiring diversityThe Nassau police commissioner rebuffed calls for his resignation while apologizing for remarks that Long Island civil rights leaders said negatively stereotyped Black and Hispanic families. LI civil rights leaders criticize Ryder comments on lack of diversityLeaders said the Nassau commissioner relied on negative stereotypes of minority families to explain his department's failure to attract more diverse candidates.

1:19
Baby, parents reunited with Suffolk cop who helped with unexpected delivery
NY warns of 'scammers' offering COVID-19 kits for personal info
Wake for slain NYPD Officer to be held today
Long Island educator for decades dies at 92
Bellone vetoes Democratic redistricting plan
Masking in LI schools: What happens next
Didn’t find what you were looking for?