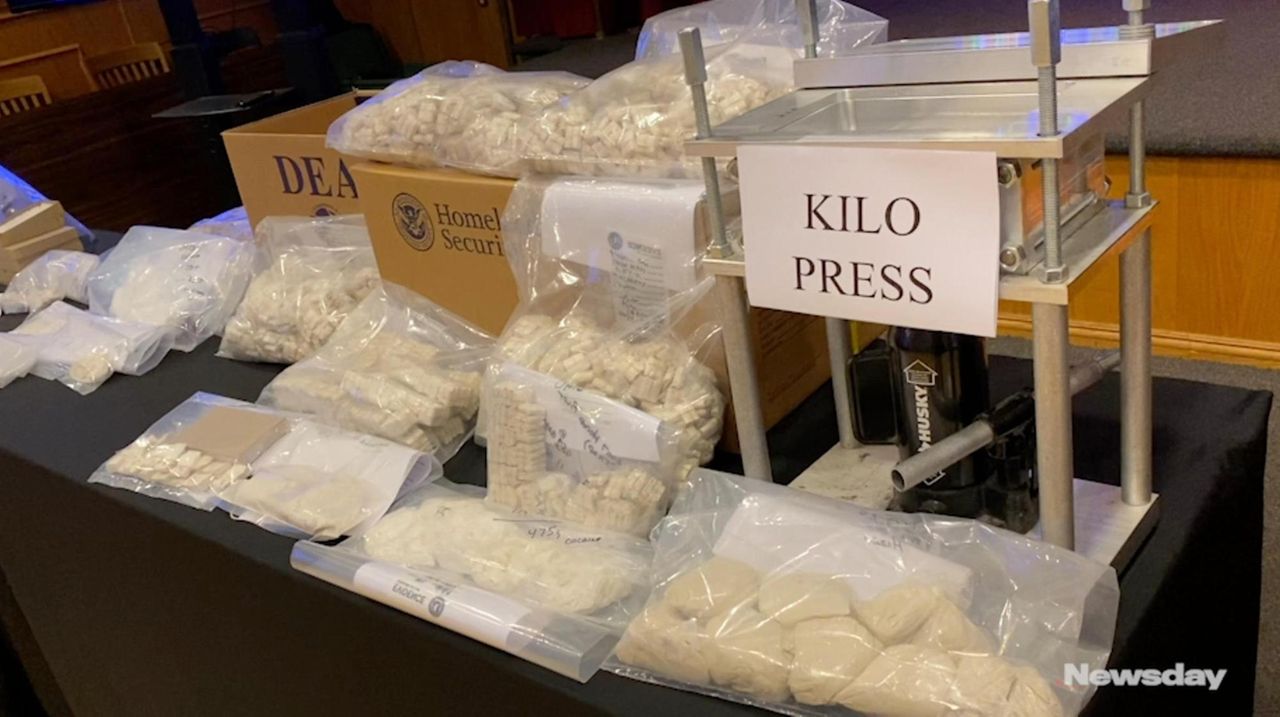 Authorities on Tuesday announced they had taken down the largest known heroin trafficking ring and seized the largest amount of heroin in Nassau County history.  Credit: Howard Schnapp

Authorities on Tuesday said they've broken up the largest known heroin trafficking ring in Nassau County history, in a bust including the arrests of 15 people and the seizing of $1.2 million worth of the drug.

The heroin is tied to 15 overdoses and three fatalities, officials said.

Acting on a tip four months ago, law enforcement agencies began the investigation that netted two alleged ringleaders who sold between 1,300 to 2,600 individual doses of heroin per month.

"This massive operation has dismantled the largest known heroin trafficking operation in Nassau County, disrupting the flow of this deadly poison into our communities," said Nassau County Executive Laura Curran, joined by representatives of several law enforcement agencies during a news conference in Mineola.

Nassau County District Attorney Madeline Singas said the probe caught the man believed to be the largest trafficker of heroin on Long Island, Luis Rivera, 40, as well as another alleged ringleader, his cousin Orlando Rodriguez, 36, both of Brooklyn.

Long Island is suffering an opioid crisis. For the first time in years, fatal opioid overdoses in both Suffolk and Nassau decreased in 2018 after alarming spikes at the height of an epidemic.

Rivera and Rodriguez allegedly pocketed at least $30,000 a week selling the drugs from the parking lot of the Gateway Shopping Center in Brooklyn, Singas said. Authorities said the drug ring sold to about 75 customers, including 54 from Nassau County and 16 from Suffolk.

Heroin distributed by Rodriguez is allegedly connected to 15 overdoses — 13 in Nassau and two in Suffolk. Three of the overdoses in Nassau were fatal, officials said.

Joseph Melito, 30, of Albertson, was also charged with being a major trafficker.

Police said they also seized a Honda Pilot used by the alleged drug ring leaders, which included a hidden trap in the console in which investigators found heroin, cocaine and cash. On at least one occasion, Rivera allegedly accepted Jordan sneakers as payment for the drugs, and investigators said they found 175 pairs of Jordan sneakers at his home.

Rodriguez was charged with two counts of operating as a major trafficker and 25 counts of conspiracy in the fourth degree. He was jailed and is due back in court on Dec. 27.

Mitchell Elman, the attorney for Rivera, Rodriguez and Melito, declined to comment.