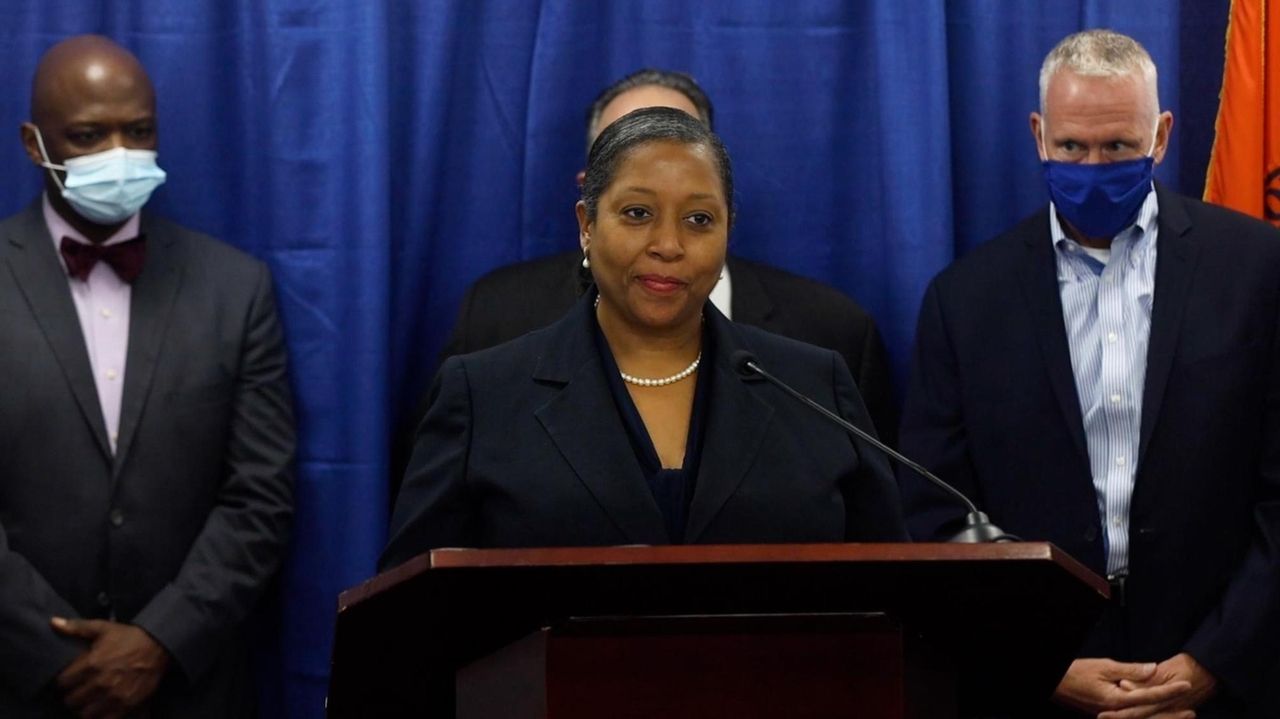 Prosecutors on Thursday announced a new program in Nassau County, called Pre-Arraignment Diversion, that would allow some who are charged with non-violent, low-level crimes to have their cases dismissed upon successful completion of the program. Newsday's Cecilia Dowd reports. Credit: Howard Schnapp

A new initiative is starting in Nassau County that prosecutors said will let people facing charges for minor, nonviolent offenses avoid a potential criminal conviction by taking part in pre-arraignment diversion that replaces court system involvement with programming focused on rehabilitation and treatment.

Nassau acting District Attorney Joyce Smith said at a news conference Thursday she believes the program will reduce recidivism, allow her staff to concentrate on prosecuting more serious crimes and help clear some of the court case backlog that accrued during the pandemic.

"A criminal conviction is not the only way to hold a person accountable for their wrongdoing. We need to be creative. We need to be innovative," she added.

The program will help people who otherwise might face barriers to finding housing or employment because of low-level criminal convictions move forward with their lives "without baggage," according to Smith. She said the program "is not a get-out-of-jail-free card" because arrestees have to demonstrate accountability to their peers, family and community members before prosecutors agree to drop their charges.

Smith and Jeffrey Reynolds, who heads the county's Family and Children's Association, also trumpeted the initiative as a way to immediately connect people facing minor offenses who have survived drug overdoses with addiction treatment that can be lifesaving.

On Monday, officials will start mailing program brochures to qualified low-level offenders whose cases are part of the court system's pandemic-related backlog and inviting their participation — a decision that has to be made within five days.

The brochures tell potential participants they are "free to talk to anyone you want, including a lawyer" while making that decision. The paperwork also says: "Nothing you say to our staff about your case can be used against you if your case goes to court later."

Prosecutors estimated 10% to 15% of about 8,000 backlogged low-level cases could be part of the program whose inception started under former District Attorney Madeline Singas, now a state Court of Appeals judge. The program will launch as a pilot, with an eye toward working to implement it in connection with new arrests in the future, according to the district attorney's office.

Prosecutors listed offenses that can be dismissed after successful completion of the pre-arraignment diversion program as including misdemeanor charges of drug possession, petit larceny, possessing stolen property, possessing a forged instrument, third-degree criminal trespass, driving with a suspended or revoked license and driving with a suspended or revoked registration; along with trespassing and disorderly conduct violations.

A participant will have about 60 to 90 days to complete the program, and people who fail to do so will have to appear in court and their case will proceed without penalty, according to prosecutors. The district attorney's Community Partnership Program, based in an office near Hempstead District Court, will administer the initiative.

Rodney Grayson, who directs the CPP, said Thursday that successful involvement in the pre-diversion initiative will involve about three days of programming.

For participants, that typically will include meeting with a peer support group, and taking part in a discussion with local stakeholders about the impact of criminal offenses or doing community service, he added.

Prosecutors said programming focused on preventing shoplifting and also on gang intervention will be employed as appropriate and that some of the resources available to participants will include substance abuse treatment and referrals for housing, food, education and job training. Graduate students studying social work at Adelphi University will serve as program intake specialists.

N. Scott Banks, attorney-in-chief at the Legal Aid Society of Nassau County, said his agency has established a hotline number at 516-560-6048 for people who want free legal advice while deciding whether to take part in the program. He added Thursday that his agency's endorsement of the initiative "didn't come easy," but after assurances that included a guarantee that prosecutors would release program data to ensure people with less resources and minorities were getting a fair chance to participate.

"We had a lot of debate about this program and we came to the conclusion that it is in the county's best interests and certainly in our clients' best interests, even if not necessarily in our best interests, to participate in this program," said Amistad official Geoffrey Prime, who added that it would help defendants break a cycle of justice system involvement.

But Andrew Monteleone, who heads the Criminal Courts Bar Association of Nassau County, expressed skepticism later Thursday about a program he said may not do enough to protect defendants' rights.

"If this could work, it would be great. But it's not going to happen in 60 or 90 days for people that really have problems," he said, speaking of those struggling with drug addiction and mental illness.

The program's launch follows a May order from New York's chief administrative judge that discusses some of the procedure for such an initiative, including that a person who opts in first must be allowed to speak to an attorney.

LI has second-highest COVID-19 rate for students, staff
3:52
Gabby Petito's father: 'Her nature was always to smile'
Police: Pedestrian hit, critically injured by driver in crash
You might have to pay $35 to drive through Manhattan starting in 2023
Affordability and open space are the allure in Middle Island
Port Jefferson Station housing gives former marine a home and a chance at 'serenity'
Didn’t find what you were looking for?