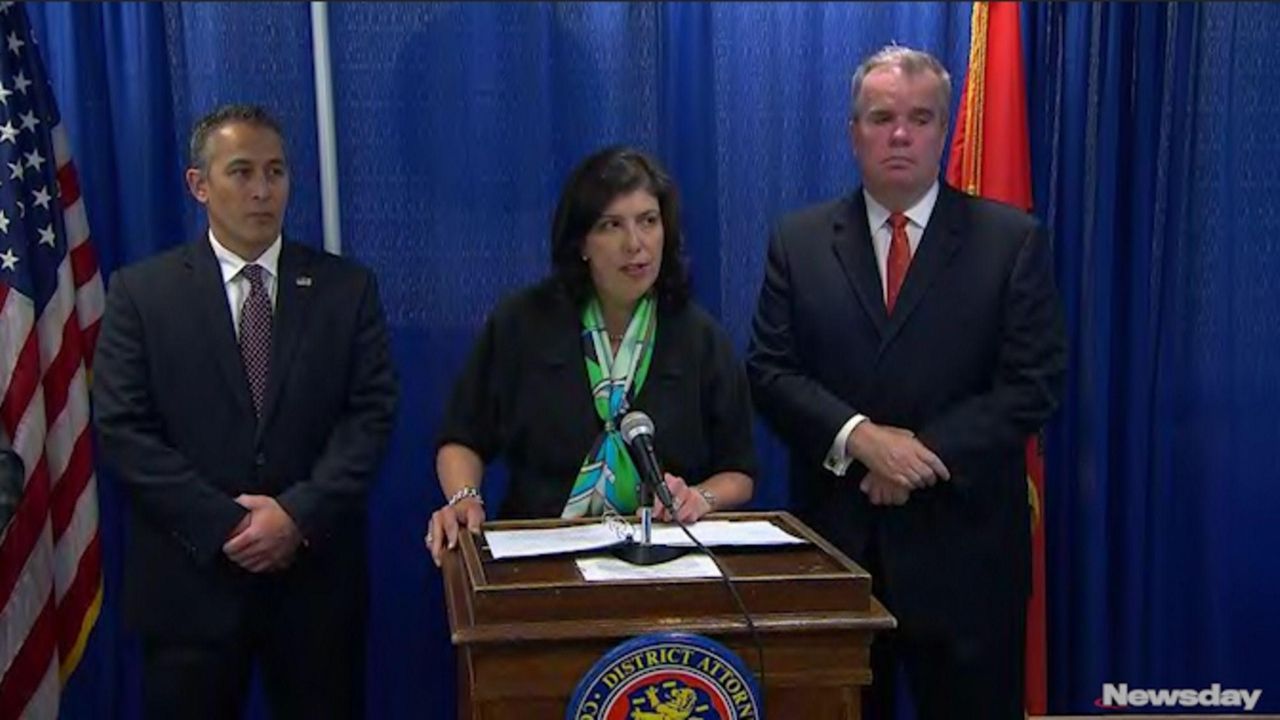 On Thursday, June 15, 2017, officials announced that 41 alleged members of the MS-13 street gang were indicted for a four-year spree of violence. Nassau County District Attorney Madeline Singas said that the indictment charges them in connection with 32 acts of violence, including eight attempted murders, along with shootings and slashings. Credit: News 12 Long Island

Dozens of alleged MS-13 street gang members are facing conspiracy and other felony charges after arrests Thursday that followed a joint law enforcement operation in Nassau County targeting the criminal syndicate with ties to El Salvador and a reputation for brutal machete attacks.

Nassau District Attorney Madeline Singas said a grand jury had indicted 41 alleged MS-13 members in connection with 32 violent acts since early 2013 that included eight attempted murders, along with other shootings and slashings.

“Today we are taking a major step to reclaim our streets, our schools and our parks from this gang,” Singas said. “ . . . With these arrests, 41 of MS-13’s worst are facing serious criminal charges.”

Nearly three-dozen of the defendants face first-degree conspiracy charges that carry a penalty of up to life in prison. The district attorney said the prosecution’s theory is that MS-13’s goal is to inflict acts of terror and “all of these individual acts are committed in furtherance of that conspiracy — that existence of that gang.”

She said all those indicted allegedly had committed at least one act contributing toward the conspiracy. Records show that such acts also include possessing machetes or bats, making gang hand gestures, throwing rocks, and repeatedly following someone and staring at that person in “an intimidating manner.”

Nassau Acting Police Commissioner Thomas Krumpter said the defendants were ages 15 to 30 years old. He said the bust grew out of “good old-fashioned detective work,” and would put a dent in the gang’s activities in areas including Roosevelt, Uniondale, Hempstead and Westbury.

Prosecutors said authorities arrested eight defendants in Nassau and one in Maryland. Ten defendants already were inmates in Nassau’s jail, eight were in upstate prisons, five were in the custody of U.S. Immigration and Customs Enforcement, three had been deported and six remained at large.

The district attorney said 17 of the 41 defendants came to the United States as unaccompanied minors.

Singas said she wouldn’t provide specific details of the cases connected to the indictment “because this gang is ruthless towards those who cooperate with law enforcement.”

She said investigators looked for patterns, and cultivated the trust of “many with deep knowledge of the workings of this gang” while building a case that led to the 85-count indictment.

During Nassau County Court arraignments Thursday, some defense attorneys said their clients previously had been arrested, with those offenses forming the basis for new conspiracy charges. In one case, a lawyer said his client already had been sentenced and was serving probation for an offense now being used as the underlying basis for the conspiracy charge.

Singas acknowledged the case involved an “innovative use” of conspiracy charges, and added that appellate courts had “specifically upheld the use of conspiracy in these kinds of investigations.”

Eighteen defendants in all were arraigned Thursday, with defense attorneys entering not-guilty pleas. Among the defendants was Luis Mancia, 21, who denied he was part of a gang.

“That is not true. I am not a MS-13 member . . . I beg you to hear me!” Mancia cried out to Acting State Supreme Court Justice Teresa Corrigan.

Corrigan advised Mancia to speak to his attorney, who would speak for him. “Those outbursts are only going to come back to hurt you and haunt you,” she said.

Among others arraigned were Jose Barahona, 20, of Uniondale, who already faced five counts of attempted murder for allegedly shooting at a group of people last August in a Hempstead yard.

Jason Molina, assistant special agent in charge of the federal Homeland Security Investigations’ New York office, said Thursday that authorities were waging war on MS-13 — a group he said thrives on spreading violence and strives for power and control of neighborhood turf by using fear and intimidation tactics.

Thursday’s bust came a day after his agency — the investigative arm of ICE — announced a local task force that will use criminal arrests and civil immigration powers to combat MS-13 and other gangs.

Thursday’s gang sweep also follows a quadruple homicide in a Central Islip park in April and the September beating deaths of two teenage girls from Brentwood that authorities have linked to MS-13.

U.S. Attorney General Jeff Sessions vowed “to demolish” MS-13 during an April visit to Suffolk County following the discovery of the mutilated bodies of four young men in a park. The slayings of Justin Llivicura, 16, of East Patchogue; Jorge Tigre, 18, of Bellport; Michael Lopez Banegas, 20, of Brentwood; and Jefferson Villalobos, 18, of Pompano Beach, Florida, remain unsolved.