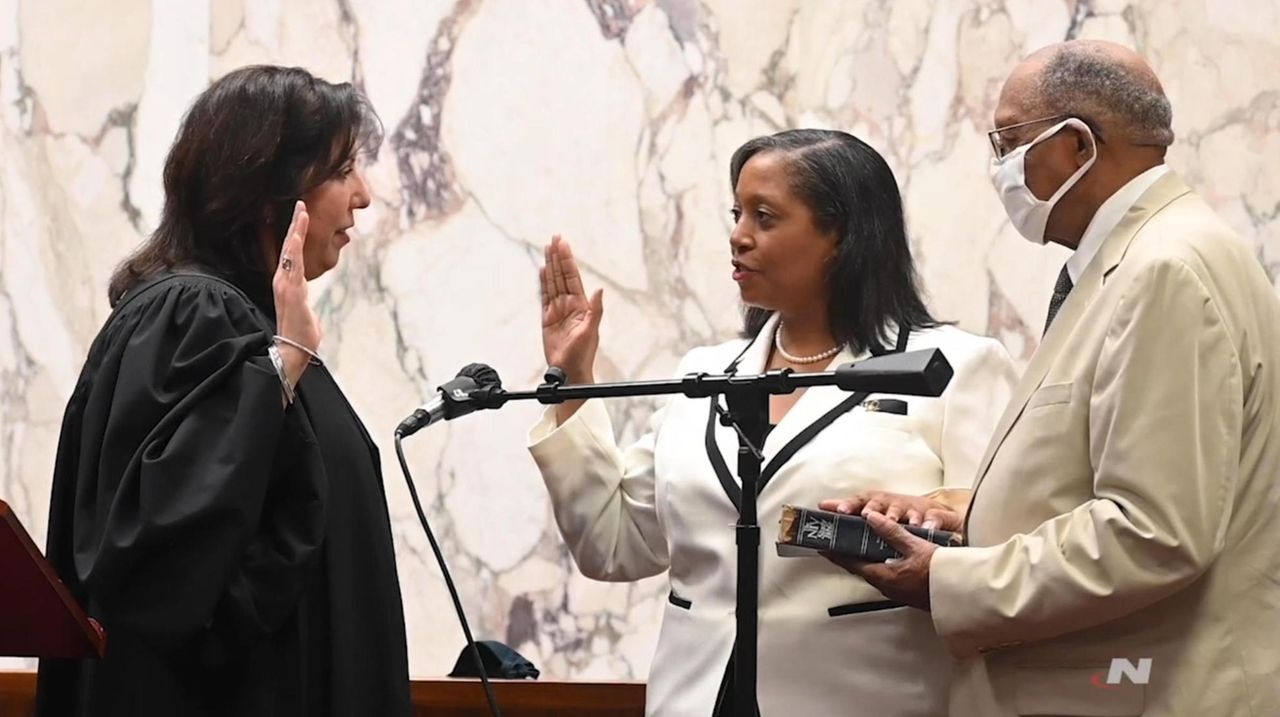 Joyce Smith was sworn in as Nassau's acting district attorney at a ceremony in Mineola on Wednesday. She is the first Black person to hold the position. Credit: James Carbone

Joyce Smith made history Wednesday as she took an oath as Nassau County’s acting district attorney, becoming the first Black person to fill the role.

Court of Appeals Associate Judge Madeline Singas swore in Smith a day after ascending to the bench in the state's highest court and resigning from her second elected term as Nassau's district attorney.

Smith said later Wednesday it was "an amazing honor" to be a trailblazer as a person of color.

"It's a privilege that I don't take lightly. And I just have such a debt of gratitude and I'm humbled by it. But I understand that I have to stand in this role to serve first," the acting district attorney added.

The Hempstead resident and Howard University School of Law graduate is the first Black person to serve in the role.

Smith, 51, joined the Nassau district attorney’s office in 2018 and was executive assistant district attorney for the Community Relations Division when Singas recently named her as her interim successor under the law.

"I wasn’t elected to this position but I promise each and every one of you that I, we, will continue to serve the people of Nassau County with humility and integrity," Smith said of herself and fellow prosecutors after taking her oath in State Supreme Court in Mineola.

The acting district attorney's father, Peyton Smith, a U.S. Army veteran raised on a farm in Tennessee, held the Bible she placed her hand on during her swearing-in.

The county's new top prosecutor said during the ceremony that her father and her mother, whose parents immigrated from Barbados, taught her and her siblings while raising them in the Hollis section of Queens to value their faith in God, to get an education and to serve others.

Smith said "the odds" were that she and her siblings shouldn't have finished high school or gone to college, but would have been "engaged in criminal activity" before age 18.

She encouraged the dozens of district attorney's office employees who attended the ceremony to dedicate themselves to victims and the voiceless, saying she knew many were "carrying unimaginable caseloads following this pandemic." The acting district attorney said the pandemic and a climate of social unrest in 2020 had "tested all our character," adding: "But we're still here ... we're going to get through this storm together."

The Hempstead resident and Independence Party member previously led the Special Prosecutions Division of the Queens district attorney’s office — where she worked for 15 years, concentrating on domestic violence cases.

Smith spent four years as a staff attorney in the office of general counsel for the U.S. Commission on Civil Rights, investigating and recommending best practices for relations between police and communities, according to a biography her office released.

Smith, who is single and has no children, also served previously as executive director for the Bronx Family Justice Center and as assistant commissioner and deputy chief of staff for the NYC Mayor’s Office to End Domestic and Gender-Based Violence.

If Gov. Andrew M. Cuomo takes no action, Smith, a graduate of Adelphi University and Howard University School of Law, will continue to serve as acting district attorney until a special election to fill the job. In the meantime, Cuomo could choose to appoint Smith or a different lawyer as acting district attorney. Cuomo's office said Wednesday that the matter was under review.

The acting district attorney — who said she hadn't heard from Cuomo — also said she didn't have any plans right now to run for office and joked she was focused on figuring out "where the copy machine is and where the water cooler is."

While heading community relations, she created several advisory councils made up of leaders in Nassau’s African American, Hispanic, South Asian and Asian communities to create opportunities for collaboration among those residents, prosecutors and police.

"What I'm personally committed to is bringing our culture and the richness of our community's diversity to the forefront of our conversations. Understanding who we are as a county is first and foremost the best way for our prosecutors to be equipped to serve our communities," Smith also said.