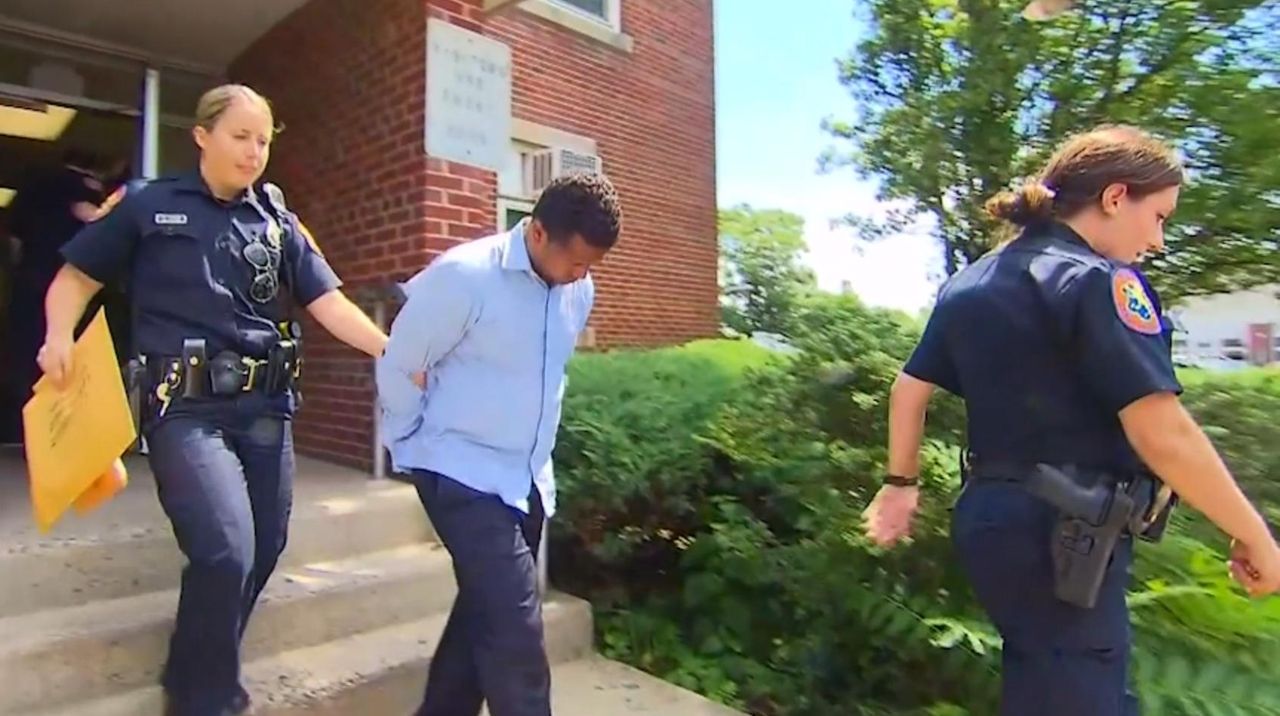 Nassau County Legis. Carrié Solages has been arrested on misdemeanor charges of assault and child endangerment after a dispute at his girlfriend's apartment in Valley Stream, Nassau County police said on Wednesday, June 21, 2017. Solages, 38, a Democrat from Elmont, pleaded not guilty at his arraignment in First District Court in Hempstead, his lawyer said. Credit: News 12 Long Island

Nassau County Legis. Carrié Solages was charged yesterday with assaulting his girlfriend after he flew into a rage when he couldn’t find his stash of marijuana in their Valley Stream home, according to authorities and court papers.

Solages, 38, pleaded not guilty and was released without bail on misdemeanor charges of third-degree assault and endangering the welfare of a child — the girlfriend’s daughter — at his afternoon arraignment yesterday in First District Court in Hempstead.

A handcuffed Solages, a former Bronx prosecutor who has served in the legislature for six years, didn’t answer questions as Nassau police led him to a patrol car outside the Fifth Precinct in Elmont. He later left court with his sister — mobbed by television cameras — and declined to comment.

Brian Griffin, Solages’ defense attorney, called the charges “mere allegations” and said his client has “absolutely no intention” of resigning amid calls from his fellow Democrats and Republicans for him to vacate his seat.

“He is certainly a dedicated public servant,” said Griffin, of Garden City. “Now what he asks of the public is that they give him his presumption of innocence, which everyone is entitled to.”

According to court documents, Solages’ girlfriend told police Solages had abused her for more than two years.

“He always tells me that he owns the police department and the courts. He believes that if I call the police on him, nothing will happen,” she said. Nassau police were called at about 12:45 a.m. yesterday to the Dawson Drive home where Solages lives with the woman, their 3-year-old son and the woman’s two other children from a previous relationship, according to court documents.

Solages, according to court documents quoting the girlfriend “began accusing me of hiding his marijuana which he had somewhere in the house” and grabbed her arm and neck and pushed her into a wall.

The woman told police: “When I told him that I did not have his marijuana, he became enraged and began cursing and screaming at me. He said, ‘You think I’m playing. I’m going to [expletive] you up.’ ”

Solages, according to the court documents, began throwing trash around the kitchen and said: “Where’s my weed?”

He started arguing with the girlfriend’s 14-year-old daughter while the woman recorded him on her cellphone and that’s when Solages attacked her, court documents said.

“He grabbed me by my forearm and pushed me on my neck into a corner by my front door,” the woman said, leaving her with “severe pain” and scratches on her arm and neck. She was treated at the scene by a police ambulance medical technician, police said.

Police said in court papers they had viewed the woman’s cell phone video.

The 14-year-old daughter witnessed the assault and jumped on Solages’ back “in an attempt to pull him off her,” according to court documents, and then the girlfriend ran out and knocked on a neighbor’s door for help. Solages took off in his truck and, minutes later, was arrested, police said.

Coughlin said that Solages doesn’t have a prior criminal record but has an “unreported domestic violence history.” She did not provide specifics.

Griffin responded: “Anything that’s unreported, you should question whether it ever happened.”

Det. Lt. Richard LeBrun, the department’s top spokesman, said: “No one is above the law and today’s developments and arrest is a clear example of that.”

Solages is due back in court Aug. 10.

With John Valenti and Robert Brodsky