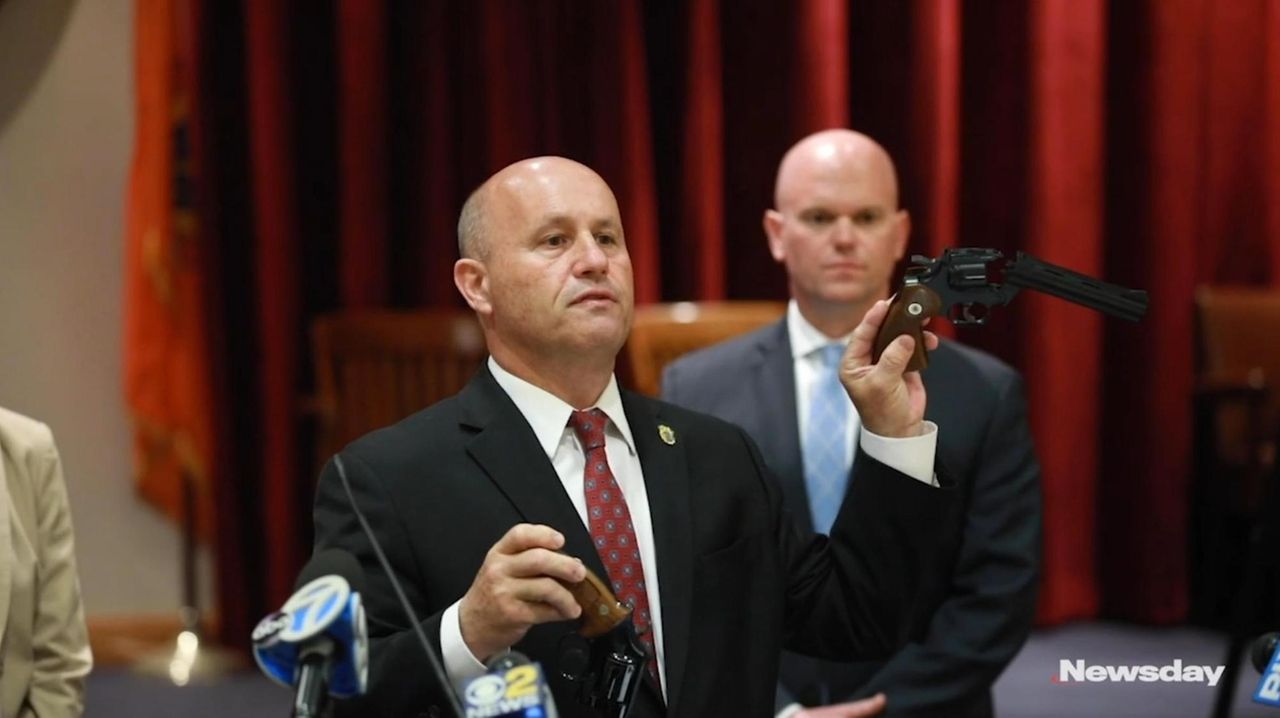 Police say a mentally disturbed man was arrested after drawing a gun when detectives approached him Sunday in Valley Stream. The detectives realized the gun was fake after the man pointed it towards them. Credit: Newsday / Reece Williams

Nassau County police arrested and charged a "mentally-disturbed" Valley Stream man after he pointed what appeared to be a revolver at detectives but turned out to be an air gun, authorities said.

Ezequiel Tarquino, 60, was taken into custody Sunday after the two detectives noticed the gun had a slight bend in the barrel, indicating it was likely a BB gun, Nassau Police Commissioner Patrick Ryder said at a news conference Monday in Mineola.

Ryder said his officers would have been justified shooting Tarquino but his life was likely spared because of their training and discipline.

"It was a perfect scenario for those detectives in that they were able to not shoot," Ryder said. "But we have to make those split-second decisions of taking another person's life or losing our own. It's challenging every single day for our members out there."

Tarquino was charged with two counts of second-degree menacing with a weapon and one count of criminal possession of a weapon. He was issued a desk appearance ticket and is due back in court Aug. 19.

"This is a testament to the emphasis this department places on training and de-escalation," said Nassau County Executive Laura Curran.

The incident began around 1:30 p.m. Sunday as detectives from the Fifth Squad, working on another assignment, noticed a man walking northbound on Fletcher Avenue in Valley Stream with the butt of a gun sticking out of his back waistband, Ryder said.

The detectives approached Tarquino and identified themselves as police, he said. Tarquino then pulled the gun from his waistband and pointed it at them, Ryder said.

Video of the incident, taken from a nearby Ring doorbell, shows a man identified by police as Tarquino pointing the gun at the detectives who immediately take cover behind their vehicle. The detectives point their guns at the man who immediately drops his weapon, puts his hands in the air and is handcuffed.

A neighbor from across the street can be heard yelling to the officers "he's sick. He's mentally ill. Please don't shoot him." One of the officers responds "we know" and "we're not going to shoot him."

Ryder said Tarquino's sister told officers her brother has been off his medication and needs court-ordered treatment.

During Monday's news conference, Ryder showed the weapon allegedly brandished by Tarquino, a Crossman air gun 357, side-by-side with a nearly identical Smith & Wesson revolver. Both guns, he said, weigh about the same and are made of steel.

"The difference is [the air gun] opened up," Ryder said. "They are trained enough not to shoot. Cops make split second decisions. It's not an easy job. Unfortunately sometimes it's his life or another's life."