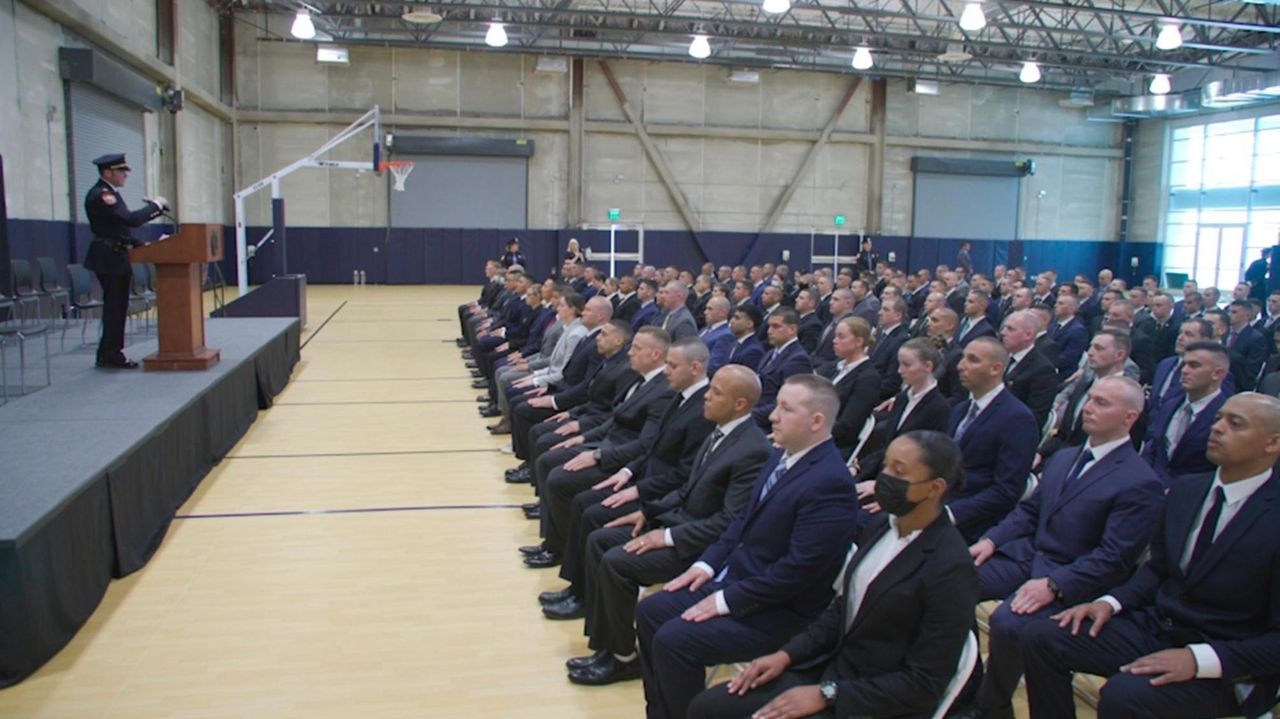 On Friday 161 recruits were sworn into the Nassau County Police Academy. Officials said it’s one of the most diverse classes in the department’s history. After the ceremony, Police Commissioner Patrick Ryder, whose son was sworn in, addressed recent backlash over comments he made to Newsday. Newsday’s Cecilia Dowd reports. Credit: Kendall Rodriguez

An emotional Nassau County Police Commissioner Patrick Ryder said Friday he won’t resign after growing calls from community activists for the top cop to step down for comments he made in Newsday blaming the so-called "broken homes" of Blacks and Hispanics for the lack of diversity in the police department.

Ryder, speaking to reporters after his 22-year-old son Liam was one of 161 new police recruits sworn into the police academy in Garden City Friday, got choked up as he spoke about his son and reflected on the fallout from his comments.

"I’m here today to swear my son in," said Ryder, whose voice broke and whose eyes filled with tears. "It’s been a rough couple weeks and I’m proud of him; very proud of him."

Friday's swearing in came a day after a coalition of civil rights activists and some police fraternal organizations publicly called on Ryder to resign – or for Nassau County Executive Laura Curran to fire him.

At least two Nassau County police groups expressed support for Ryder on Thursday and a group of mostly Hispanic community leaders spoke out in support of Ryder on the steps of police headquarters in Mineola Friday.

Ryder said that he has no plans to resign. "I serve at the pleasure of the county exec. As long as she has me, I’m here."

Ryder, who apologized after his comments were published last month as part of a Newsday report showing that Black and Hispanic police recruits were rejected during the hiring process at higher rates than their white counterparts, acknowledged the fallout from his comments.

Ryder said the last few weeks had been tough because of "the challenges that we’ve been under as a department about diversity, about comments that I had made that was insensitive to the community." He added: "I came out and took the hit for that right away."

Curran, who presided over the recruit swearing-in at the department’s new center for training and intelligence on the campus of Nassau County Community College in Garden City, again supported Ryder, even as some warned they would continue to press the issue as Curran, a Democrat, seeks re-election in the fall.

"While I don’t agree that family makeup has anything to do with diversity or lack of diversity in law enforcement, I believe this police commissioner has really proven himself in all of our communities, in our growing diverse communities," Curran said.

Asked whether she had privately expressed her disdain to Ryder for his comments, she replied: "He and I speak very frankly together."

Curran created a diversity committee to overhaul the police hiring process and said the group is expected to provide her with preliminary recommendations by the end of the summer.

A Newsday investigation last month reported that only 36 Black police officers were hired from a pool of 2,508 Black applicants in the six years after a 2012 hiring test. Of 3,389 Hispanic applicants from the same test, 89 were hired. 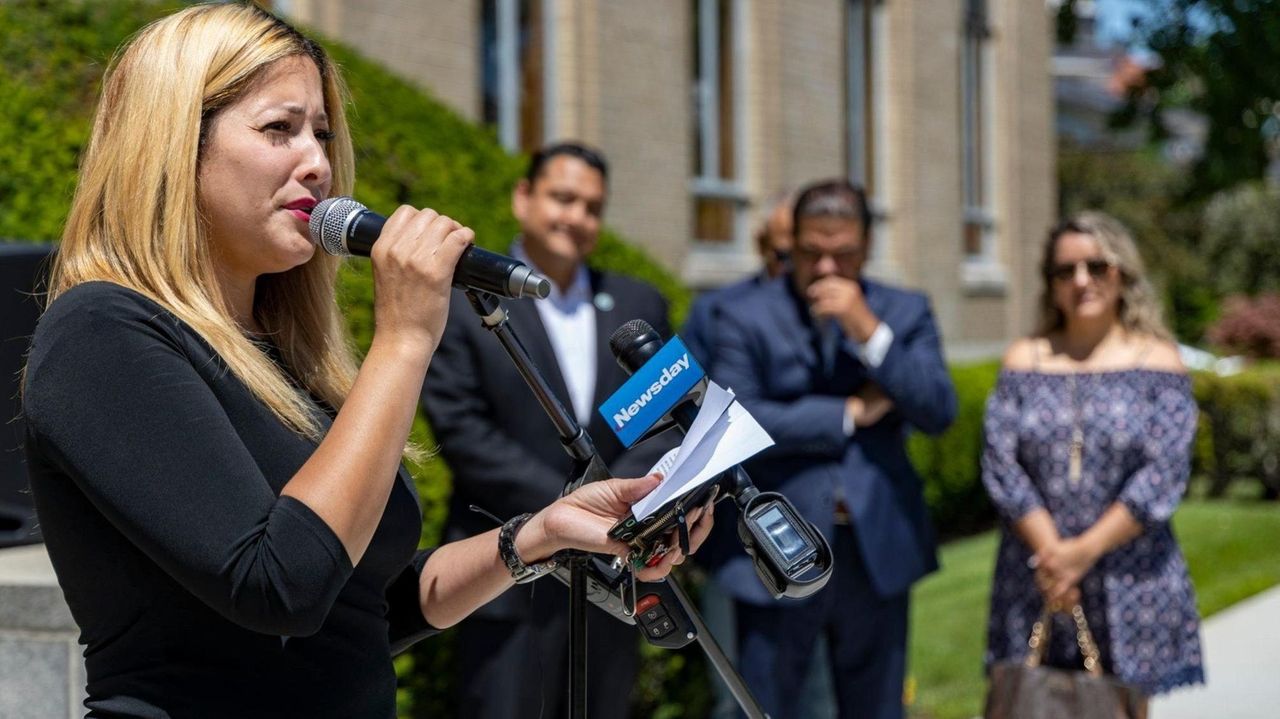 Community gathers to support Nassau police commissioner Leaders and members of the community gathered on Friday at Nassau Police Department headquarters in Mineola to oppose the call for Commissioner Patrick Ryder to resign.  Credit: Kendall Rodriguez

Friday’s class of 161 police recruits, who will undergo seven months of training before becoming police officers, included 12 people of Hispanic background, five recruits who are Asian and just four Black recruits, according to statistics provided by the police department.

Ryder acknowledged the department has a long way to go in diversifying its ranks.

"Look we have a lot of work to do on diversity; we know that," he said. "We’re trying."

Ryder, in an interview published in Newsday last month as part of the report on police hiring, said he had two parents who pushed him to pursue a law enforcement career and drew a parallel between the family life of racial minorities and their success at becoming police officers.

Ryder, while referencing the department’s efforts to recruit in Roosevelt, a predominantly Black and Hispanic community, said: "Look, a lot of these kids come from broken homes. A lot of the kids come from struggles in their neighborhood. And they need that advantage, they need someone to push them a little bit."

Civil Rights attorney Frederick K. Brewington and a host of other activists and representatives of police fraternal organizations on Thursday held a news conference and said Ryder should resign.

"The fact of the matter is that communities of color are at a social disadvantage," she said. "So unfortunately he didn’t pose his words as articulately as we would have liked him to. And yes it’s true we have to hold our leaders to higher standards. But we also have to consider his intentions."

Some Hispanic leaders voice support for Nassau's top copA group of Hispanic community leaders on Friday spoke out in support of Nassau County Police Commissioner Patrick Ryder following calls from civil rights leaders and some police fraternal organizations for the commissioner to resign for comments he made about the department's lack of diversity that some deemed racist. Coalition calls for Nassau Police Commissioner Patrick Ryder to resignThe groups called for Ryder's exit over comments he made in a Newsday interview that linked the county's failure to hire more Black and Hispanic police officers to the prospective job candidates coming from "broken homes." Ryder apologizes as more condemn his comments to Newsday on hiring diversityThe Nassau police commissioner rebuffed calls for his resignation while apologizing for remarks that Long Island civil rights leaders said negatively stereotyped Black and Hispanic families. 6,539 Black people tried to become police officers on LI. Only 67 were hired.Minority applicants weren't hired nearly as often as white ones in the past decade, and experts see "clear evidence that it is not the people, it is the process" causing the disparity.