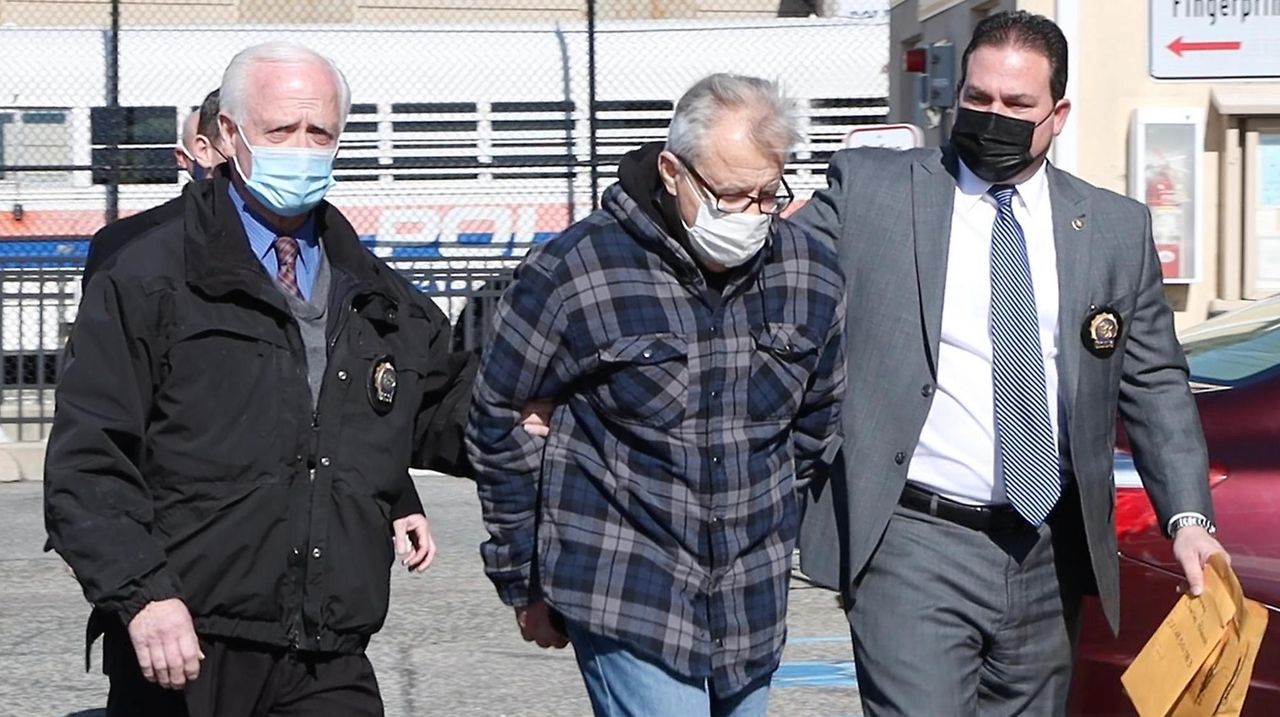 A 70-year-old driver is facing felony charges after police said he struck superstar rapper Nicki Minaj's father last week on a Mineola road, before leaving the pedestrian to die and hiding his car in his nearby home's garage.

Charles Polevich of Mineola remained silent Wednesday morning as detectives walked him into Nassau police headquarters in handcuffs for a virtual arraignment on charges of leaving the scene of a fatal crash and tampering with physical evidence.

Authorities said Robert Maraj, 64, of Mineola, died Saturday at an area hospital after Polevich's 1992 white Volvo station wagon struck him at about 6:15 p.m. Friday while he was walking in the roadway on Roslyn Road at Raff Avenue. Both Maraj and Polevich were going north, according to police, who believe Maraj was either walking home or to a nearby store.

After hitting Maraj, Polevich did stop at first, but then left the scene after seeing he had injured Maraj, Nassau police homicide squad commander Det. Lt. Stephen Fitzpatrick said at a media briefing Wednesday.

"He was absolutely aware of what happened," Fitzpatrick said of Polevich. "He got out of the car and he looked at the deceased, got into his car and made the conscious decision to leave instead of dialing 911."

A felony complaint also said Polevich stood over Maraj and asked him if "he was OK" before returning to his car and leaving the area.

Video surveillance recordings in the neighborhood helped lead police to Polevich as they worked to track the movements of the older-model Volvo.

"We kind of tracked it right to his house," Fitzpatrick said, adding that Polevich also had covered up the vehicle in his garage.

The lieutenant said police didn't get a chance to evaluate Polevich for any alcohol or drug use at the scene because he fled. But if Polevich had stayed and was sober, there would have been no criminal charges, Fitzpatrick said.

Polevich surrendered to police Wednesday morning with his attorney, Michael Scotto. He then pleaded not guilty at his arraignment.

Nassau District Court Judge Lisa Petrocelli set Polevich's bail at $250,000 bond or $125,000 cash, ordering him to surrender his passport and to stay in New York state if released from jail. The judge also suspended his driver's license and set his next court date for Friday.

Polevich had remained in custody hours after his arraignment, but Scotto said Wednesday night that his client had posted bail and was released from jail.

The defense attorney also released a statement calling the deadly encounter "a tragic accident" and said he and his client's thoughts were with Maraj's family.

Polevich owns an environmental drilling company in Guam and also has a residence in that U.S. territory where he spends about nine months a year, according to police. They said he had no prior criminal history or record of driving offenses.

Carol Maraj, the victim’s estranged wife, told Newsday on Wednesday that her family was relieved by the progress in the case.

"I’m very, very, very happy about the arrest," she said, adding that all of Maraj’s children "are pleased" that the alleged culprit in their father’s death was caught.

Nicki Minaj, who was born Onika Maraj in Trinidad and Tobago and raised in Queens, had not issued a public statement on her father's death or Polevich's arrest by early Wednesday evening. The 38-year-old has said in interviews that she used music as an escape from a difficult childhood, saying her father was abusive and struggled with an addiction to drugs and alcohol.

David Schwartz, a Garden City-based attorney who previously represented Minaj's brother, Jelani Maraj, in a local sex abuse trial, told Newsday after the deadly crash that Robert Maraj had been at his son's trial every day and loved Jelani dearly.

A Nassau jury in 2017 convicted Jelani Maraj of sexually assaulting his now-former stepdaughter starting when she was 11. He is serving 25 years to life in prison.

With Joan Gralla and Cecilia Dowd