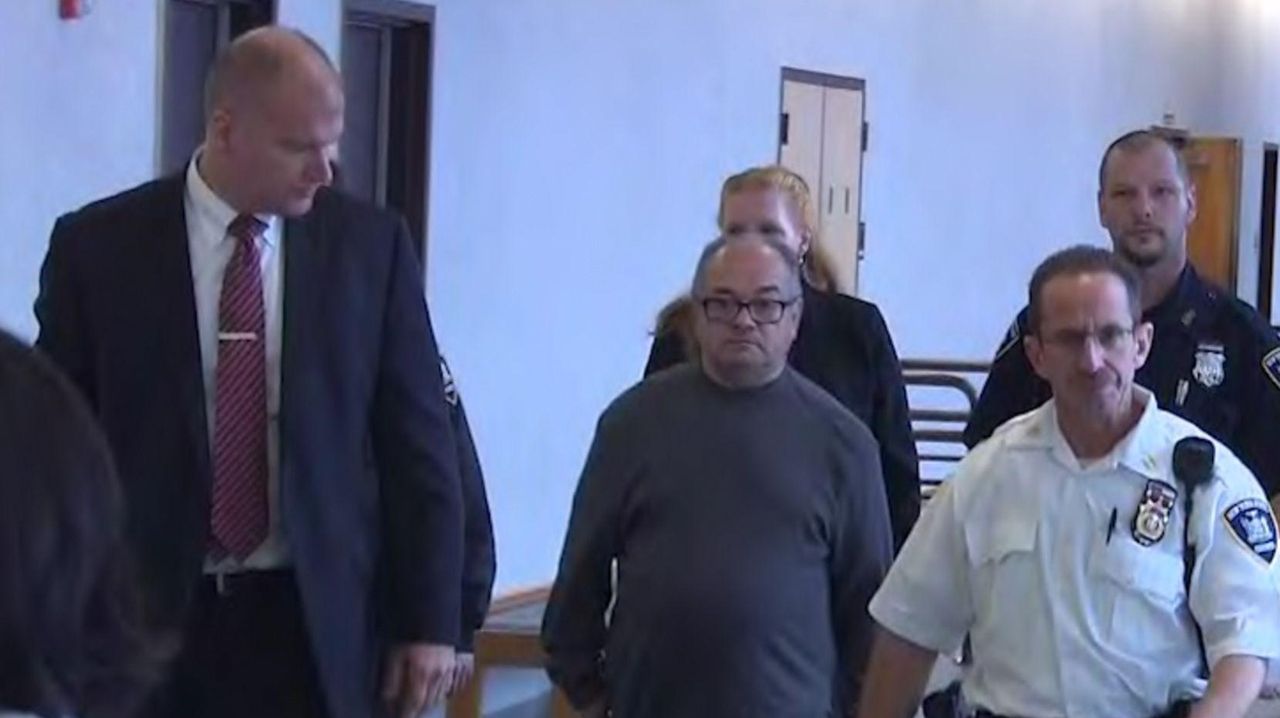 After seven days of deliberation, a Suffolk County Court jury Tuesday, May 2, 2017, found Cesar Gonzales-Mugaburu, of Ridge, not guilty of charges he sexually abused his foster sons. The jury foreman said he voted not guilty on all counts from the beginning because there were too many holes in the prosecution's case. Gonzales-Mugaburu, 60, had been charged in the sexual abuse of six foster sons between 1996 and 2016.  Credit: News 12 Long Island

Half a dozen witnesses testified that their foster father had sexually abused them over two decades, but a jury on Tuesday acquitted the Ridge man who had been entrusted with their care.

The packed courtroom in Suffolk County Court in Riverhead was silent as the jury foreman said “not guilty” 16 times, one for each charge levied against Cesar Gonzales-Mugaburu, 60, who cried, then wiped away tears with a tissue.

Gonzales-Mugaburu — who had been jailed since his arrest on Jan. 20, 2016 — walked out of the second-floor courtroom a free man.

Flanked by his attorneys, Donald Mates Jr. and Denise Shanley, both of Hauppauge, Gonzales-Mugaburu declined to comment as he walked passed a phalanx of television cameras and reporters.

“He’ll always be known as the acquitted pedophile, not as the wrongfully accused man,” Mates said. “Once his name is dragged through the mud, he’ll never get it cleared.”

The verdict came on the seventh day of deliberations, which the jury foreman, Tim Carney, 48, a firefighter from Islip, described as difficult but respectful.

From the beginning, Carney said he voted not guilty on all counts because there were too many holes in the prosecution’s case.

“I could not put a man away for the rest of his life on what they gave us — the evidence they produced,” Carney said in an interview after the verdict.

Although Carney said he believed some of the accusers, he added that prosecutors failed to offer any evidence to support their accounts.

“There was nothing ever to back them up,” he said.

Suffolk assistant district attorneys Laurie Moroff and Christina Pinnola, who prosecuted the case, declined to comment after the verdict.

Thomas Spota, the Suffolk County district attorney, expressed his disappointment. “For those discouraged by this outcome, it is important to guard against any chilling effect that might result; especially a reluctance to report abuse,” he said in a statement.

During the three-week trial, six men, ages 16 to 29 years old, testified that Gonzales-Mugaburu sexually abused them when they were boys sent to Ridge to live as his foster children. The abuse continued after Gonzales-Mugaburu adopted them, the accusers said. They said the abuse occurred between 1996 and 2016.

Two other boys, now 12 and 14, said Gonzales-Mugaburu told them crude sexual jokes while they were foster children living in his home in 2015. These boys told their social worker, who alerted the authorities, which led to Gonzales-Mugaburu’s arrest.

The most serious charge carries a maximum sentence of 25 years to life in prison.

During deliberations, members voted, treating each accuser as a separate case, Carney said. The votes varied — 8-4, 10-2, or 7-4 with one abstention — but leaned in favor of acquittal, he said. Only once, early on, was there a 6-6 vote, Carney said.

On the fourth day of deliberations, Carney said a minority number of jurors stood by their guilty votes, prompting the panel to send Suffolk County Court Judge Barbara Kahn a note to say it was deadlocked.

But after the judge reread the instructions on reasonable doubt and ordered them to continue working, Carney said members kept going over the evidence and asked those who favored conviction to make their case. “Instead of shooting holes in a not-guilty verdict, show us how to get to a guilty verdict,” he said.

Two members were “adamant” about voting to convict Gonzales-Mugaburu, but eventually they were swayed by the majority, Carney said.

A lot of the jurors did not sleep well, particularly during the week they were deliberating, he said.

Carney added, “At the end of the day, you do have someone’s life in your hands.”