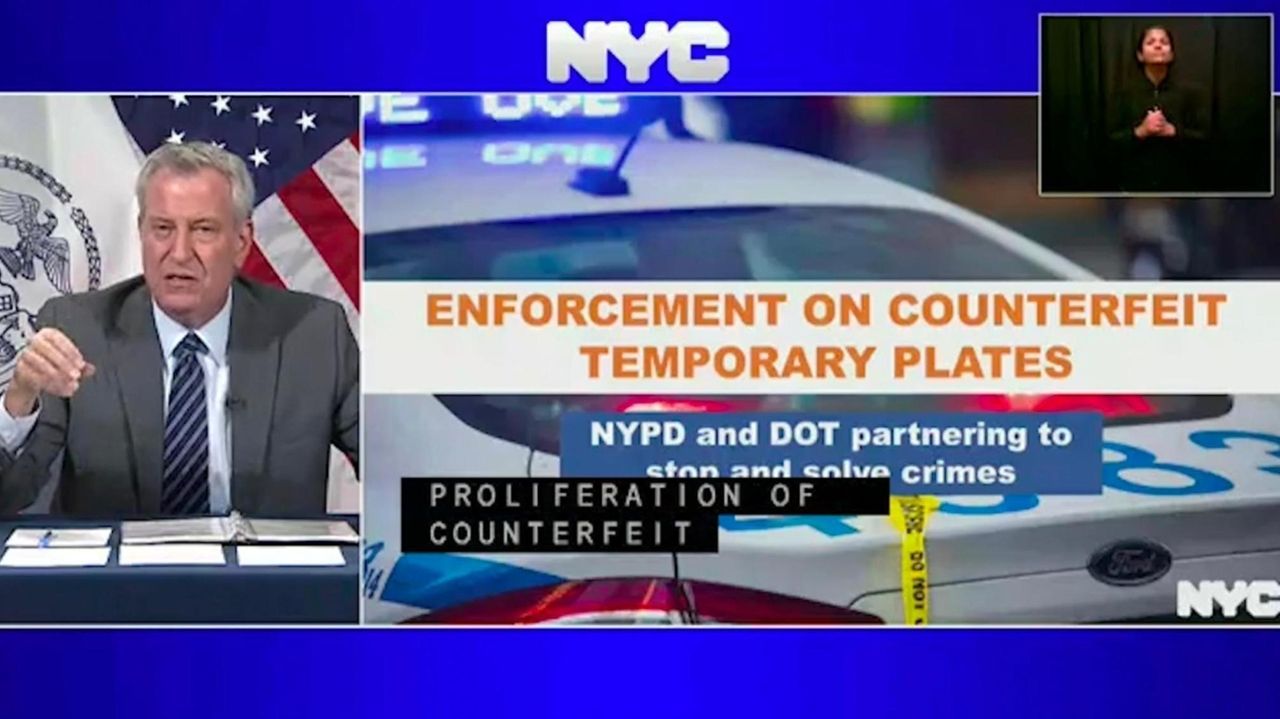 New York City Mayor Bill de Blasio and NYPD Commissioner Dermot Shea said on Wednesday that officers are being trained to identify fraudulent license plates, and that cars with the plates will be impounded and held until the owner can produce proper paperwork. Credit: NY Mayor's Office

The mayor said the fraudulent license plates -- often purportedly from Texas -- are affixed to thousands of vehicles in New York City, making it difficult for the NYPD to track down suspects involved in shootings, crashes and other incidents.

"You immediately undercut the ability of the NYPD to find someone if they have a fraudulent plate," de Blasio said.

NYPD Chief of Department Rodney Harrison said there were 33 shooting incidents and 60 shots-fired reports linked to counterfeit license plates since the beginning of the year, as well as 562 motor vehicle crashes.

"These numbers are alarming and I want to be honest with you, I think I am lowballing the numbers. I think the numbers are a lot higher," Harrison said. "There are still a lot of investigations going on with some of these shooting incidents. It is troublesome."

Automobiles with counterfeit license plates could be impounded and sold at auction if their owners do not properly register the vehicles, Harrison said.

Harrison and NYPD Commissioner Dermot Shea said demand for counterfeit license plates surged after Department of Motor Vehicles offices were shut down during the coronavirus pandemic. The plates are sold through Craigslist and social media sites, the officials said.

The crackdown comes after officials nabbed three drivers who tried to evade the toll on the RFK Bridge by using fake license plates.

The fraudulent plates place an unfair burden on motorists who register and insure their cars, Shea said, and degrade the quality of life in the city by taking up parking spots and clogging traffic.

"We’ve seen the same fraudulent plate on numerous vehicles," Shea said. "Just this week we had a shooting in Queens, southeast Queens, where the individuals were in a car with fraudulent plates."

The NYPD is not the only agency that has taken notice of the surge in fraudulent license plates. Four Long Island residents accused of selling temporary Texas license plates in Suffolk County were arrested and charged with second-degree criminal possession of a false instrument, Suffolk District Attorney Timothy Sini announced in February.

The arrests stem from an investigation by Sini’s office and Suffolk police after officials noticed an increased prevalence of the tags in Suffolk County, officials said.

According to prosecutors, the defendants advertised temporary tags on Craigslist, Facebook and other social media sites. Buyers would provide the defendants with vehicle identification numbers as well as the make, model and year of the vehicle in exchange for a temporary tag, which is valid for 60 days.

Undercover investigators who purchased the temporary Texas plates from the defendants paid $100 to $150 for each tag, according to Suffolk prosecutors.

Marist poll: 59% of NYers say Cuomo should resign
3:14
AG report: Cuomo sexually harassed multiple women
These restaurants, businesses, colleges and NYC theaters will be requiring COVID-19 vaccines
'Sensitive' videos on race, sex, to be restricted in Smithtown schools
Long Beach Road flooding 'a problem for 30 to 60 years'
Faculty union at Stony Brook U. appeals for universal mask mandates
Didn’t find what you were looking for?